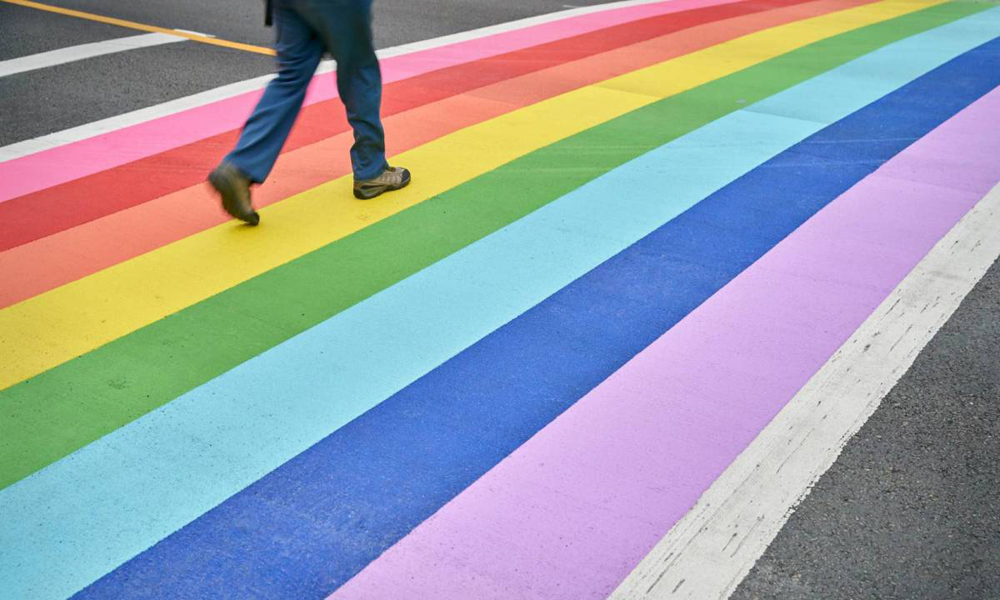 When I was in high school in the ’90s, I didn’t have any social media platforms on which I could share my views with others, because social media did not yet exist. However, I did have a few spaces where I could let people know who I was and what I stood for. For instance, my backpack was covered in pins to show which bands I liked and to make it clear that I wanted to “smash fascism” (I still do, by the way). One day, I got a one-inch button with a Rainbow Flag on it from a record store. It took me weeks to muster the courage to finally put it on my bag. I was out to some people, but this type of queer visibility felt like a huge step forward for me…until I realized that not many people in my school knew what the Rainbow Flag represented. What I had thought of as an act of radical queerness fell completely flat because there was no familiarity with the symbol I was using.

Now rainbow stuff is everywhere. It’s on T-shirts, ATMs and beer cans, especially around Pride. It’s becoming a permanent fixture in an increasing number of municipalities in the form of Rainbow Crosswalks. Like many of the most well-known symbols of our communities’ movements (Pride parades and the Rainbow Flag itself) that have been embraced by the dominant (i.e., cis, hetero) culture, the history of Rainbow Crosswalks is rooted in activism against state-sponsored oppression of queer people. For a while they were used to indicate a high concentration of queer-owned businesses. Now they are everywhere, often with the intention to show how inclusive and welcoming a community is of queer and trans people.

Great progress, right? Then why are there just as many news stories about their defacement as there are about their institution?

Chase Blodgett is a Yukon-based activist. He is the founder and president of All Genders Yukon Society, an organization that provides services to trans, two-spirit, nonbinary and questioning people and their primary supports. Blodgett has lived in Yukon for 10 years, but it took him two years to meet other queer folks in the territory because there weren’t always ways for people to connect: “Back then, we didn’t have any LGBTQ2S+ spaces. Now Queer Yukon Society exists, All Genders Yukon Society exists.” Blodgett sees symbols like Rainbow Crosswalks as an incredibly important part of a broader strategy to bring queer and trans people together. “Someone who was to move here tomorrow wouldn’t have as hard a time connecting with the community now. Putting in those symbols was a big part of that.”

Though he celebrates the positive impact Rainbow Crosswalks have had on the region, Blodgett says we need to stay conscious of the challenges that continue long after the paint dries. When someone purposely burned rubber across the first-ever Rainbow Crosswalk in Whitehorse in 2017, Blodgett made an immediate connection to the trauma he knows is endured and carried by many members of the community, telling CKRW Radio, “This incident really highlights the lived reality for people who are on the gender or sexual orientation diversity spectrum.”

According to a recent Government of Canada Community Health Survey, almost six in 10 sexual minority Canadians (people who identify their orientation as something other than straight) said they had been sexually or physically assaulted at some point since age 15, and one in 10 said they had been assaulted in the past year. In the same time period, one in three experienced unwanted comments while in public. It would be irresponsible not to state that these metrics only get worse when other personal characteristics, such as race or religion, are factored in. Violence against trans and gender expansive people is consistently described as an epidemic, with Black trans women comprising almost 70 per cent of all victims of fatal transphobic violence.

It is understandable if the idea of Rainbow Crosswalks is familiar to you but these statistics are not. They are not cited in very many articles about Rainbow Crosswalks – none of the hundreds of articles from outlets across Canada and the US that I’ve read in the past few years has mentioned them or any similar information. Many pieces mention the cost associated with painting the crosswalks and how some people view them as an abuse of public funds. One or two concerned citizens often suggest Rainbow Crosswalks may pose a safety hazard (there is a hefty body of evidence to show they pose no threat). Then there are many, many articles that report the vandalization of Rainbow Crosswalks. Those usually include quotes from locals who are incredulous that such an act could happen in this day and age – Blodgett’s comment to CKRW could be considered an anomaly. Lots of talk about skid marks on some paint, not so much on the trauma endured by the human beings those symbols are meant to represent.

“A lot of people in the media say they are informed by public opinion. Well, they can also shape it,” says Debbie Owusu-Akyeeah, executive director of the Canadian Centre for Gender and Sexual Diversity (CCGSD). She says the media’s tendency to focus on individual acts of property damage ignores the bigger, more complicated threats to the personal safety and well-being of queer and trans people. This has the potential to give the public a skewed idea of the security concerns held by queer and trans people across the country. “The media does a phenomenal job of forcing public opinion to look at oppression against LGBT people as individual actions and not as decades, centuries of ongoing discrimination that is related to racism and colonialism.”

Like me, Owusu-Akyeeah admits that she has taken lots of photos of and with Rainbow Crosswalks. “I took my little picture. Cute. Put it on social media.” But, like Blodgett, she says these symbols need to be one part of a broader strategy to help more queer and trans people feel safer and more secure in their communities. “Safety for me is beyond my orientation. As a woman, who is Black, other things are going to impact my safety before my sexual orientation. I wish a Rainbow Crosswalk could make me feel safer, but it really doesn’t.”

In the 2020 Conservative Party of Canada leadership race, some candidates announced that, if victorious, they would be the first Conservative Party leader to march in a Pride Parade. Noticeably absent from these statements were intentions or proposed measures to improve outcomes for queer and trans people in Canada, who experience significant barriers in employment, housing, social services and health care. Politicians who do not swiftly and decisively approve or support Rainbow Crosswalks are often maligned in the press by colleagues who have styled themselves as more progressive. Perhaps unsurprisingly, these conversations tend to focus on the politicians themselves and not on the communities they allege to serve. “We need to challenge the fact that politicians can use what has been a symbol of resistance to win votes and then not follow it up with legislative change,” says Owusu-Akyeeah.

Rainbow Crosswalks should provide a backdrop for transformational change, not stand in for it. Blodgett says that when gender identity and gender expression were added as protected grounds to the Yukon Human Rights Act, territorial lawmakers were photographed on Whitehorse’s permanent Trans Pride Flag Crosswalk, the first of its kind in Canada. “The MLAs [Members of the Legislative Assembly] responsible got their photo taken on that crosswalk to make the announcement,” he says, adding, “That’s some good press. It’s essential. It’s important.”

Queer Yukon Society and All Genders Yukon Society are currently collaborating to open a Pride centre. After years of volunteer work, they have hired an executive director to work full-time on getting it off the ground. Such an institution will undoubtedly increase the number of connections between queer and trans people in the region, resulting in better social, health and employment outcomes. However symbolic, a Rainbow Crosswalk on its own didn’t get the community to this point: hard-working community members did. The crosswalk just provided a colourful way to get there.

Symbols like the Rainbow Flag are really important to me because I remember a time when they weren’t so common. A few years after my backpack pin fiasco, I went to see a guidance counsellor about being bullied for being queer. He had a rainbow sticker on his door, indicating that he had done some kind of allyship training. His suggestion was that I try not talking about being queer anymore. He said if I wasn’t “so obvious about it,” that might help with the bullying. I suggested he put that rainbow sticker somewhere other than his door. Regardless of this experience, my Rainbow Flag pin helped me find more people like me before the internet turbocharged our ability to connect with each other.

Now that rainbow stuff is ubiquitous and it’s easier for queer people to find each other online, I’m eager to see what the next generation does with symbols like Rainbow Crosswalks. Owusu-Akyeeah, who works with a lot of queer and trans youth, says, “The Gen Z’ers, the TikTok’ers, they’re beyond this. Some of them are coming out in elementary school and they are comfortable in their identities. These days they are asking for fundamental policy changes. It’s beyond a rainbow,” she says. “It is the most beautiful thing to witness.”

To me, that is an indication that young people are increasingly conscious of the fact that in a democratic country, safety should be inherent, but it isn’t unless you work for it. That’s worth crossing the street for.