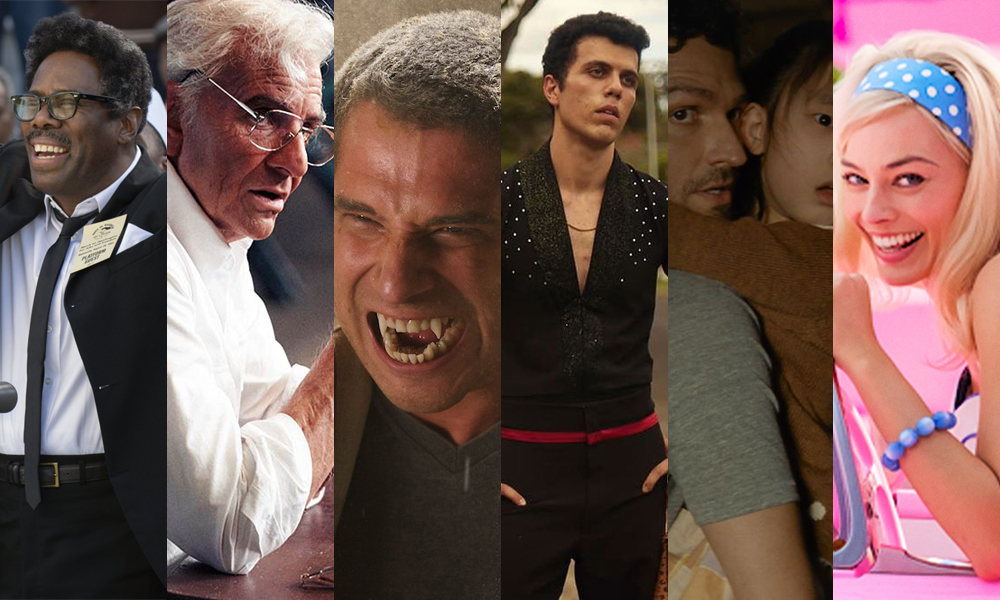 After a fantastic year where queer representation was perhaps at an all-time high in films released to theatres and streaming platforms, 2023 looks to be another year full of interesting stories involving the LGBTQ2+ community. Here is a list of eight queer movies coming out in 2023 that we can’t wait to see.

Rustin will be available to stream on Netflix sometime in 2023.

Canadian multi-hyphenate Dan Levy might be most famous for Schitt’s Creek, but his work in films appears to be just getting started. Levy will write, direct and co-star in Good Grief, a romantic dramedy about death and unexpected self-discovery. While Marc (Levy) is mourning the loss of his mother, his husband also dies out of the blue, sending his world upside down. To face the grief head-on, Marc decides to travel to Paris for a weekend getaway with two of his friends, who try to help him figure out where he goes from here.

Good Grief will be available to stream on Netflix sometime in 2023.

Bradley Cooper co-writes, directs and stars in Maestro, one of the more controversial films coming out in 2023. Produced by Steven Spielberg and Martin Scorsese, this biographical film about legendary composer Leonard Bernstein will dive into Bernstein’s turbulent marriage to actor Felicia Montealegre (Carey Mulligan), while not shying away from his secret life as a queer man. Depicting the double life of a man who eventually became one of the world’s foremost conductors and composers, Bradley Cooper has already received backlash in first-look pictures for how his Jewish character will appear in the film. However, the movie is aided by a strong ensemble cast that includes Jeremy Strong, Matt Bomer, Maya Hawke and comedian Sarah Silverman.

Maestro will be available to stream on Netflix sometime in 2023.

Directed by Rightor Doyle (Bonding), the comedy Down Low chronicles the heavy circumstances of a sexually repressed man (Zachary Quinto) who receives a happy ending from a more uninhibited younger guy (Lukas Gage). The two form a bond that ultimately ruins the lives of those around them. Down Low is written by Phoebe Fisher (TV’s I Know What You Did Last Summer) and Lukas Gage (The White Lotus), with a cast that includes queer icon Judith Light as well as Audra McDonald and Simon Rex.

Down Low will be released sometime in 2023.

The television series Teen Wolf aired for six seasons from 2011 to 2017, opening the doors for other supernatural teen dramas. The television adaptation, which was based on the 1985 film starring Michael J. Fox, was noteworthy for flirting with homoerotic themes spliced together with violence and gore. To continue the show’s storylines, Paramount+ will stream Teen Wolf: The Movie, written by Jeff Davis and directed by Russell Mulcahy, both of whom identify as gay men. Since the television series first premiered, some of its original cast members have come out as queer, and the upcoming film version will see the return of some of them, like stars Tyler Posey and Colton Haynes. Other cast members in the movie version will be Crystal Reed, Tyler Hoechlin, JR Bourne, Shelley Hennig and Holland Roden.

Teen Wolf: The Movie will be available to stream on Paramount+ on January 26, 2023.

Knock at the Cabin

Good or bad, any time a new M. Night Shyamalan movie drops, it tends to be quite the event. This time, the horror director will take audiences on an apocalyptic psychological journey about the end of days. While Andrew (Jonathan Groff) and Eric (Ben Aldridge) are vacationing with their daughter (newcomer Kristen Cui) in a remote cabin, they are taken hostage by a group of doomsdayers led by Leonard (Dave Bautista). The family of three must make a sacrifice to stave off the impending apocalypse. As with much of Shyamalan’s work, there is bound to be a twist ending to this frightening tale.

Knock at the Cabin will be released in theatres on February 3, 2023.

Having premiered at the Melbourne International Film Festival in 2022, the Australian movie Of an Age will finally see its American and Canadian debut in 2023. Presented by Focus Features, the movie concerns a Serbian ballroom dancer named Kol (Elias Anton) who thrusts himself into a passionate 24-hour romantic entanglement with Adam (Thom Green), who happens to be the brother of Kol’s dance partner (Hattie Hook). Of an Age took top honours at CinefestOZ, where it won the Best Film Award, and is directed by queer filmmaker Goran Stolevski (You Won’t Be Alone).

Of an Age will be released in limited theatres on February 10, 2023.

While not the most obviously queer film to make this list, the likely campiness of this neon-decked-out movie will no doubt be a winner among the LGBTQ2+ crowd. Barbie stars Margot Robbie as the titular Mattel doll opposite Ryan Gosling as Ken in the franchise’s first live-action film. While the plot has been a secret for quite some time, Barbie is directed by Greta Gerwig (Lady Bird, Little Women), and co-written by Gerwig and Marriage Story helmer Noah Baumbach. Co-starring queer actors Scott Evans, Kate McKinnon and Alexandra Shipp as well as trans model Hari Nef, Barbie will feature a huge cast that includes America Ferrera, Simu Liu, Kingsley Ben-Adir, Issa Rae, Michael Cera, Will Ferrell, Emerald Fennell and Ncuti Gatwa.

MATTHEW CREITH is a freelance journalist based in Austin, Texas. He is a member of GALECA: The Society of LGBTQ Entertainment Critics, and participates in the association’s Dorian Awards. You may also know him for his work on Matinee With Matt, Screen Rant, and Giant Freakin Robot. You can find him on Twitter: @matthew_creith or Instagram: matineewithmatt.