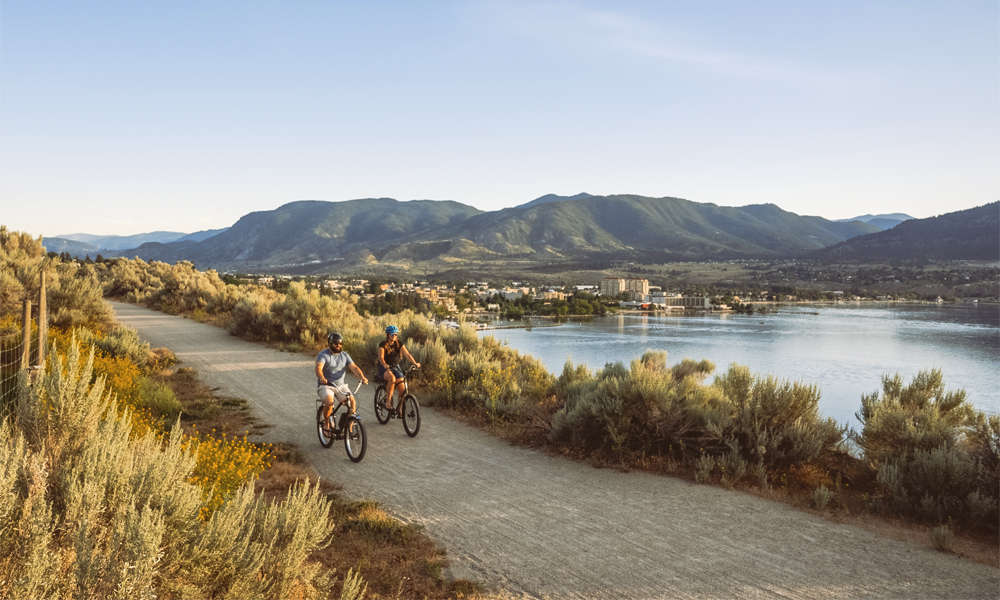 Eat, drink and be merry in the beauty of the Okanagan Valley…

If the past year and a half has taught us anything about travel, it’s that the ability to easily move around the world can disappear in an instant. While international travel is the first thing to get restricted when new variants arise, travelling within our own country can be a safer and less stressful alternative for ensuring our trips go ahead as planned (although, depending on conditions, you may still need to check to be sure there are no restrictions at your destination). The big Canadian cities are certainly options, but there are also some smaller hidden gems that have a lot more to offer than you might expect. Case in point: Penticton, BC.

Uniquely situated between two lakes, Penticton has hot summers and dry winters, and gets more than 2,000 hours of sunshine per year. It takes about an hour to fly to the Penticton airport from Vancouver (on two airlines), and you can get there from Toronto in under five hours. It’s a city with a small-town feel that is easy to get to and welcomes everyone, including the LGBTQ community.

There is a gay nude section at Three Mile Beach, but Penticton is mostly a destination for the queer traveller who enjoys everything from outdoor activities in beautiful nature to delicious food and drink from a variety of restaurants, wineries, cideries and especially breweries. Although it’s home to only around 35,000 people, Penticton has the highest brewery-per-capita ratio in Canada, and will be adding to this impressive number once the eighth brewery is completed this fall.

Perhaps the most obvious choice for where to stay while visiting would be the Penticton Lakeside Resort and Conference Centre. It’s in a perfect location right on the waterfront, with its own private beach area and easy access to the walking path along Okanagan Lake Beach. With 274 rooms, panoramic views, restaurants, lakeside patios and amenities like a gym, pool and hot tub, it isn’t hard to see why it’s such a popular spot to book.

When it comes to food, you would probably be surprised at the number of options available. Whether you want to take a sandwich on freshly made bread from the Joy Road Pop Up Bakeshop when you head out on an excursion, enjoy some top-rated maple bacon poutine on the Slackwater Brewing patio after a day out on the trails, or treat yourself to a farm-to-table dinner made from ingredients in the on-site garden at the upscale Bogner’s of Penticton, there really is something for every taste and mood.

There is also no shortage of options for adult beverages, many of which are locally sourced. The Naramata Bench has some of the highest acclaimed Okanagan wineries (more than 40 of them just within a 20-minute drive), and there is even one right in downtown Penticton (Time Winery) with a delicious food menu. Of course, you could also try the aforementioned craft breweries, and even some cideries – like La Petite Abeille, which is a great place to stop for a bubbly cider from their hand-picked fruits when you’re biking along the Kettle Valley Rail Trail with an e-bike from Hoodoo Adventures.

Keep in mind that this is the kind of city you could visit without a car, because so much of it can be explored virtually ‘fuel free’ by foot, pedal or paddle. So whether you’re looking for some outdoor adventure kayaking along the lake on a guided tour or just want to enjoy the flavours of the area in a welcoming environment, Penticton could be the perfect escape you never even knew you were looking for.

For more information check out www.visitpenticton.com.

JOSH RIMER is a travel writer and content creator based in Vancouver, BC. He may be best known for his video segments on YouTube and OUTtv, but he was also Mr. Gay Canada 2019. Follow him on social media at @JoshRimer.