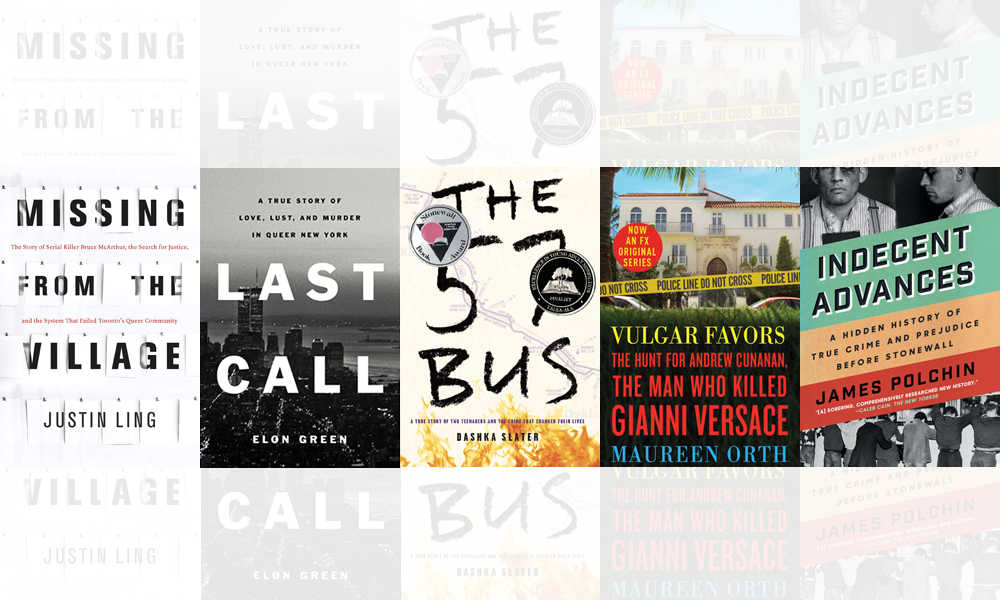 This month, we’re sharing some LGBTQ+ true crime books that belong on your must-read shelf. While there may be many ways to learn more about a case you’re interested in, a book can often provide a more well-rounded story especially when it’s written by a seasoned journalist or someone with first-hand knowledge of the case. If you’re a fan of true crime staples like Ann Rule’s bibliography, Michelle McNamara or Vincent Bugliosi, check out these books by writers who have worked hard to shed light on crimes in the LGBTQ+ community.

Missing From the Village by Justin Ling
Justin Ling had been investigating the disappearances of multiple men in Toronto’s gay village for three years before Bruce McArthur was officially arrested in 2018 and charged with three counts—and eventually eight counts—of first-degree murder. The time Ling spent digging into police reports and working on building relationships with the friends and family of the missing men made him uniquely qualified to host a podcast about McArthur—and then write a book.

Missing From the Village: The Story of Serial Killer Bruce McArthur, the Search For Justice, and the System That Failed Toronto’s Queer Community is about the McArthur case but it’s also about the strained relationship between the police and Toronto’s LGBTQ+ community. Ling simultaneously tackles the big picture of how crimes with LGBQT+ ties are investigated and the details of who each one of McArthur’s victim was as a human being. For anyone interested in understanding the mistrust of police within LGBTQ+ communities—and how to change it, Missing from the Village is a must-read.

Last Call by Elon Green
If you’ve never heard of the “Last Call Killer”, you aren’t alone. The case of Richard Rogers, the killer who preyed on gay men in New York City in the late 80s and early 90s was overshadowed by the AIDS epidemic in a time when homophobia was the norm. Elon Green’s new book Last Call: A True Story of Love, Lust and Murder in Queer New York City chronicles what NYC was like in that time, how Rogers managed to slip through the cracks, and most importantly who his four known victims were.

Like Bruce McArthur, the Last Call Killer was targeting middle aged gay men, often picking them up in gay bars. The bodies of at least four victims were found dismembered and wrapped up in trash bags in three different states, but the case didn’t get a lot of attention. With the help of fingerprint evidence and a lot of pressure from a family member of one of the victims, Richard Rogers, a middle-aged surgical nurse living in Staten Island, was finally caught in 2001. Unlike a lot of true crime that focuses on the killer, Green’s goal with Last Call was to give the victims the limelight and investigate how the system failed to catch the person who murdered them for over a decade.

The 57 Bus by Dashka Slater
One day in 2013, 18-year-old Sasha Fleischman was taking the bus home from school in Oakland, California as they always did. Sasha, who identified as agender—neither male nor female, had fallen asleep and 16-year-old Richard Thomas and two of his friends noticed Sasha was wearing a skirt. Security footage from the bus shows Richard holding a lighter close to Sasha’s skirt three times before it ignites. The skirt immediately went up in flames causing second and third degree burns to Sasha’s legs. Richard was arrested and charged with a hate crime, and the case made national headlines.

The 57 Bus: The True Story of Two Teens and the Crime That Changed Their Lives explores whether a teenager “playing a prank” as Richard described it should be considered a hate crime. A “hate crime” is defined as a “prejudice-motivated crime which occurs when a perpetrator targets a victim because of their membership (or perceived membership) of a certain social group or racial demographic.” While Sasha was clearly part of the LGBTQ+ community and what Richard did could be considered bullying or harassment—at what point does it constitute a hate crime? In addition to Sasha and Richard’s stories, The 57 Bus also sheds light on the unprecedented level of violence transgender people experience, the flaws in the justice system and more themes related to race, gender, and class.

Vulgar Favors by Maureen Orth
The murder of Gianni Versace in 1997 made headlines all over the world, but the suspected killer, Andrew Cunanan—who was gay—had already killed four people before that. Vanity Fair contributor Maureen Orth was in the process of reporting on Cunanan’s crimes and the manhunt in progress when news broke about Versace’s murder. Vulgar Favors: Andrew Cunanan, Gianni Versace and the Largest Failed Manhunt in U.S. History covers Cunanan’s life, family, and path towards becoming a murderer, as well as the lives of his victims.

Recently adapted by Ryan Murphy into the FX series American Crime Story: The Assassination of Gianni Versace, Orth’s book has been criticized for being inaccurate. While the Versace family says it is full of gossip and speculation, Orth and her publisher Random House stand behind the reporting and it is considered the most accurate account available of Cunanan’s three-month long killing spree. From how Versace and Cunanan met to the FBI’s disjointed investigation, Vulgar Favors offers a timeline of events pulled together from a wide range of sources.

Indecent Advances by James Polchin
For most people, what they believe about a crime, who committed the crime, and the victims is what they learn from the media. Spanning 50 years from the end of World War I to the Stonewall protests in 1969, James Polchin’s book Indecent Advances: The Hidden History of Murder and Masculinity Before Stonewall covers how the media, the psychiatry profession, and the legal system handled cases of violence against queer men.

Using examples of cases that employed the “gay panic defense”, Polchin illustrates how people who committed hate crimes were able to successfully turn the tables and blame the victim for their own murder. He also shows how the language used by the media pointed the finger at gay men blaming them for any violence they suffered. Polchin then explains how activists used the discrimination they experienced to build the gay rights movement and begin fighting back. Indecent Advances is the perfect read for history buffs with an interest in activism and the justice system.