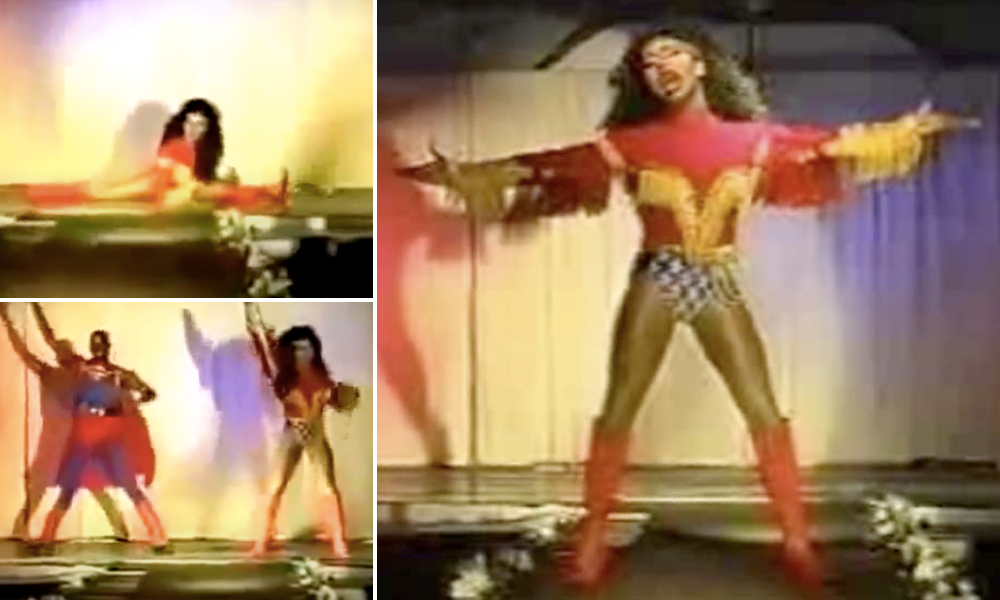 If you’re watching season 13 of RuPaul’s Drag Race you’re probably already in love with Pork Chop contestant Tamisha Iman. On Friday night’s episode (Phenomenon, the third episode of the season) almost every werkroom conversation revolved around Tamisha and she shared her two cents in the majority of the episode’s confessional interviews… probably because she’s fucking fascinating. The episode also highlighted Tamisha’s drag daughter, the late Tandi Iman Dupree and her very viral performance of “Holding Out for a Hero” at the 2001 Miss Gay Black America pageant.

You’ve seen the clips and the gifs… It’s been routinely dubbed as “the greatest drag queen entrance of all time,” now here’s a little more on the legendary queen and that epic drop.

Tandi Iman Dupree was born on August 14, 1978 in Memphis, Tennessee and from an early age Tandi had been interested in dance. In high school she was the co-captain of her school’s majorette squad and shortly after graduation she started competing at N-Cognito nightclub in Memphis.

Tandi made her presence known on the scene when she competed in the 2001 Miss Black America drag pageant and performed to Bonnie Tyler’s 1984 song “Holding Out for a Hero” (originally from the soundtrack to the film Footloose) alongside her dancing partner Dee St. James. As the opening notes of “Holding Out for a Hero” played over the waiting crowd, Dee in his sleeveless sequined Superman costume scanned the crowd and the stage searching for Tandi. Just as the song intro reached its crescendo, Dee exited the stage and Tandi wowed the crowd by unexpectedly dropping from the ceiling to the stage floor, landing in a perfectly timed split to Bonnie Tyler’s raspy first syllable. The crowd roared and for the next five minutes Tandi, in a fringed Wonder Woman costume, gave it her all with over-the-top choreography and perfectly executed lip-syncing.

Legend has it that Tandi actually broke her heel during the landing but still managed to give the performance of a lifetime.

Despite then becoming well known for her drag performances, Tandi was always a pageant girl; travelling from drag club to drag club all over: Texas, Florida, Washington D.C., and Atlanta, Georgia, to promote herself as an artist and as her dream of becoming Miss Gay Black America. But, four years after the “Holding Out for a Hero” performance she died from complications due to AIDS. Tandi Iman Dupree died on December 31, 2005 at the age of 27.

The creation of YouTube in 2005 meant massive changes for pop culture and performers in general. In the early days of the video platform a grainy video was uploaded of Tandi’s 2001 “Holding Out for a Hero” performance and it quickly picked up steam. To date, millions of people around the world have watched the legendary performance and it has been seen many more times than that in gifs shared on social media — an audience Tandi herself might never have dreamed of.

The legendary performance even made its way to mainstream TV. Dupree’s performance inspired a tribute on an episode of Glee in 2021, where Kitty Wilde (portrayed by actress Becca Tobin) began her campy dance performance to “Holding Out for a Hero” by landing on the floor in a split.

But, it was last night’s episode of RuPaul’s Drag Race that celebrated Tandi’s legacy that really hit home for LGBTQ viewers. Speaking to RuPaul Tamisha said, “If she was still alive, she would be one of your girls.” She further added that Tandi was a “true entertainer.”

She was, and will forever live in our hearts as a Wonder Woman and one of the most legendary drag performers of all time.