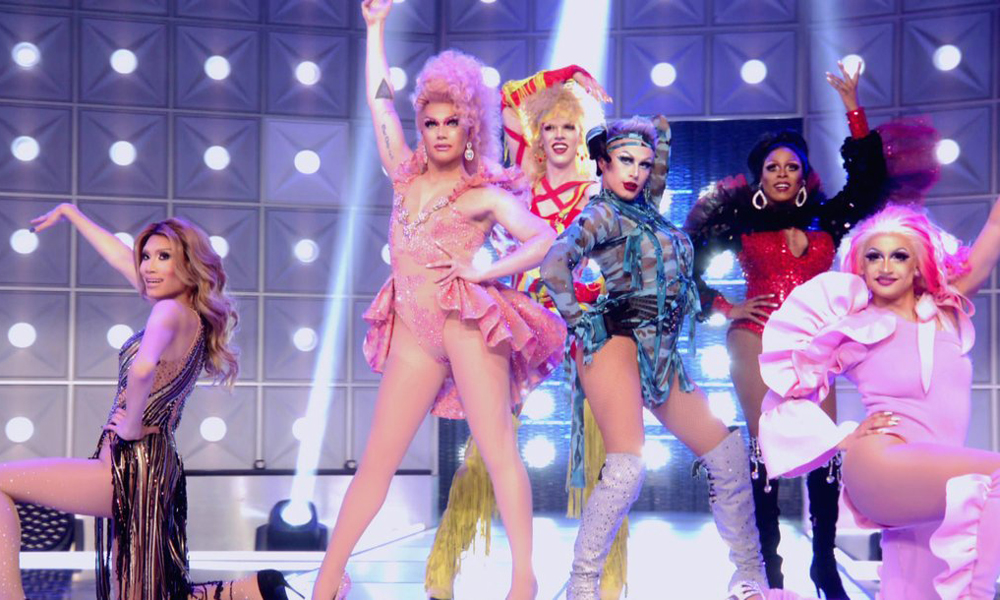 This week we get to know the almost-eliminated queens, as they get a second chance in the competition with a runway mini-challenge, and a Ru song maxi-challenge…

Last week we got to know the first half of our queens better. This week we’ll get to see the other half, and what they’re bringing to the runway. We’ve made it to the third episode of the season, and we still have yet to see anybody sent home. Does this mean we’ll be seeing more interesting eliminations later on this season? Ru has told us plenty of times that this season is full of twists and turns, and this season might actually live up to that promise.

This week’s episode starts in the werk room where our queens from last week going over the events of last week. The girls congratulate Symone for her first win of the season. LaLa Ri vows to work harder to get praise from Ru, Kandy and Tina are surprised that everybody is still in the competition as they thought it was going to be the two of them lip syncing to stay. Elliott says that after spending time with this group of queens it would be hard to send any of them home. That being said, she had no hesitation about sending anyone home from the b-list group that voted her off the island in week one.

Just like magic it’s a new day, and the b-list queens enter the werk room for the first time. They gather around the table and talk about how grateful they are for a second chance in the competition. Following the Ru mail delivery, Ru enters the room and introduces this week’s mini challenge (it’s the same as last week’s double look runway challenge). As the queens get ready for their first challenge, we find out that Kahmora usually takes a little longer than an hour to paint her face (it’s actually close to five hours). We know beauty can’t be rushed but running late on your first challenge back during a second chance is not a cute look girl.

The show goes on, and the first queen out on the runway during the Lady category is Denali, looking stunning in a dress of blue forget-me-not flowers. Joey Jay steps out in a fur vest, and no wig. It’s a signature lewk, but what will the judges have to say about it later? Rosé serves in an art-pop paper doll dress, and Tamisha Iman selling the rich Miami window fantasy in a magenta harem pant jumpsuit. Utica is giving us mod 60s glam with a camp twist, and last on the runway, running late is Kahmora. She’s giving us everything in a British inspired white coat dress that would surely pass the Balmoral test. For the Vamp category Denali steps out in a Moschino tribute, Joey Jay gives us Kahleesi 2021, and Rosé looks stunning in an Alexander McQueen inspired look. Tamisha Iman stuns in an Elvira inspired gown made of hair, and Kahmora serving us Cruel Intentions with that cross necklace. Utica shows up in another stunning outside of the box look that we’ve come to expect from her.

As the queens get out of drag, they talk about how they already feel a sisterhood bond forming. Tamisha is revealed to be the oldest in the room. But age is just a number, and she’s already proved she can step her pussy up. Ru re-enters the werk room and tells the queens they will be performing a song with their own original verse. It’s the same challenge as last week, but with new queens and a new song. As the queens get to writing their own verses, the girls with musical backgrounds start to show their talent, and confidence with the challenge. There are also a few dancers in the group. There are a few queens wanting to be the leader, and it might make rehearsal more of a power struggle. Denali is a professional choreographer, so she naturally takes the first lead. Tamisha Iman is also a choreographer but hasn’t told the group. She’s just following this very confusing lead (which has now switched to Rosé). Kahmora is struggling with the steps so the other queens decide to just carry her through the whole routine…literally. With a few minutes left in the rehearsal, Tamisha finally takes the lead, and delivers with steps everybody can follow.

The next day in the werk room the queens get ready for their man challenge, and they’re feeling quite confident in the routine they’ve come up with. Tamisha can appreciate the optimism, but admits she’s still scared to fully unpack her stuff. We love a realist. Kahmora is worried that she’s made a bad impression but thanks the other queens for supporting her because people at home aren’t always there for her. Tamisha Iman has established herself as the mother of the group, and talks about the legacy of her drag house, and children.

Out on the main stage Ru introduces the judging panel, as well as this week’s special guest judge comedian Nicole Byer. The queens perform Phenomenon with their original verses and with the majority of this group being dancers, the choreography is a lot more polished than the last group’s. This performance was well balanced, and each of the queens looked and sounded great. Out on the runway the category is “We’re Here, We’re Sheer. Get Used to it”, and all of the queens serve in their best sheer lewks.

Following the runway, we’re right into the judge’s critiques. They start with Denali, and love her versatility, and commend her talent in the performance. Ross loves Joey Jay’s sheer lewk, and Michelle loved watching her perform but does question the decision to not wear wigs. Ross says he loved seeing Joey without a wig the first time, but it did get old really fast. Michelle finishes saying she loves Joey’s look and message, and doesn’t want to change her, but she does want to see some versatility. The judges love Kahmora’s looks, but she’s lacking a strong personality. The judge’s loved Rosé’s fashion show looks, and she showed UP in the performance. Ru loves Tamisha’s dress, and even says it’s one of the most beautiful dresses that’s ever graced the stage. They love her fashion show looks and beg her to be a bigger presence on the stage. Utica is unique, and the judges are definitely picking up what she’s serving. They remind her to keep it weird, but also keep it together.

After the judge’s deliberate, Ru announces that Denali and Rosé are the top two queens of the week. While the rest of the queens are safe for the week. Just like last week, the top two queens will be competing for the winner’s spot, and a cash tip of 5000 dollars with a lip sync. The two lip sync for the win to Miss Britney Jean Spears’s If U Seek Amy. These two dancers give it their all, and after an inspiring performance to one of Britney’s most iconic songs, Ru declares Denali as this week’s winner. We’ve made it to the end of week three, and nobody has been eliminated! What does this mean for the rest of the competition?

Front runners of the week: Obviously Denali and Rosé brought their A-game to the competition this week, and it should not be ignored, but I can see queens like Tamisha Iman, and Utica rising to the top mid-competition.
Most memorable quote of the week: “A bitch is still scared to unpack… SORRY!” -Tamisha Iman on not being too confident going into a maxi challenge.
What we’ll see next week: The two groups finally meet up, and all the queens star in cheesy holiday movies during this season’s first acting challenge.
Need the story: You can read more on Tamisha’s drag daughter here: The Story Of The Legendary Drag Queen Tandi Iman Dupree And Her Epic “I Need A Hero” Performance
Missed a week?: Read our RuPaul’s Drag Race Season 13 weekly recaps right here!