Skip to Content
Home / Latest / Michelle DuBarry: Who You Callin' a Golden Girl? 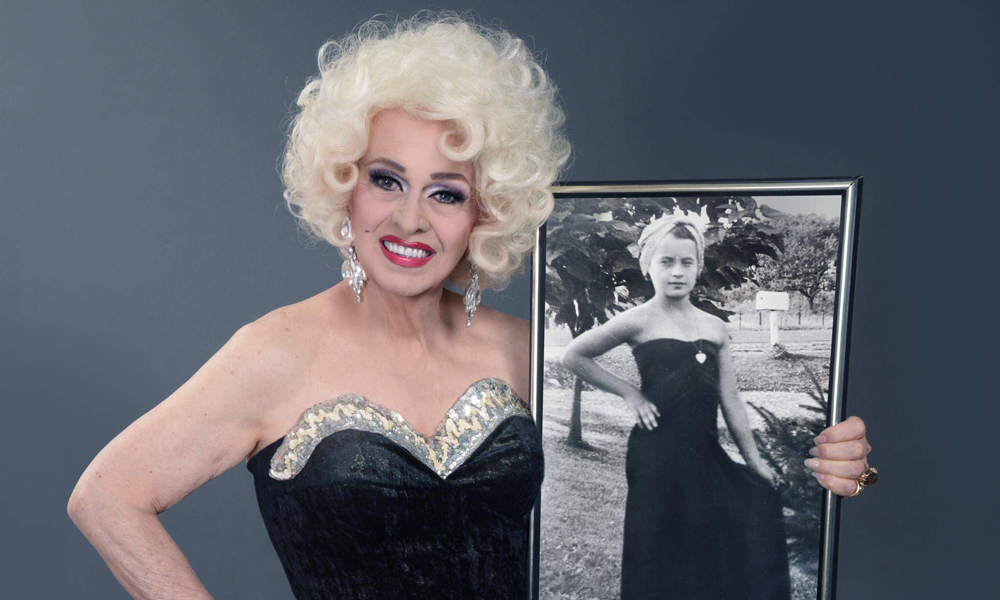 Michelle DuBarry: Who You Callin' a Golden Girl?

Many things have been said to or about Michelle DuBarry. Some chose to see a withered queen who has spent one too many years in women’s clothes. Others believes he’s a  living gay history time capsule; a glittering reminder which resuscitates an era of when female impersonation was full of costumes and pageantry.  Nowadays a growing tribe with almost like a cult-like devotion, both gay and straight, respect 84-year old Russell Peter Alldread (aka Michelle DuBarry) as a: icon, trailblazer and an international ambassador for Toronto’s drag  community.

Alldread was born at a time when as he quips, “There was no such word as gay.” Born in 1931 in small town Ontario he came from a supportive family with a mother and father that, “loved him dearly.” However a family visit to his cousins would rewrite his destiny. With the assistance of his female cousins’, in Bowmanville, Ontario at the age of eight he wore his first gown. “My cousins loved to play dress up and they thought it would be nice to do the same for me.” Little did Toronto and the world know, just like in Cinderella, a gown would change everything.

Several dresses, high school performances, appearances in drag including at a high school dance, a few relationships and one marriage to a woman (which ended in divorce) later; the stage beckoned him. In Toronto’s drag early years Alldread auditioned for club owners. Wearing sequins and heels he found many owners welcoming to female impersonation. In the process of stepping on stage at bygone clubs such as: 511 and The Music Room he was unknowingly developing a community from the ground up under the name Anita Mode.

He would never tell you this but on top of being an out-of-the-closet drag queen in the 1950s and 60s he put together one of Canada’s first drag troupes Façade. Once Alldread got a taste for the applause he put troupes together like: Phase One where one of the founders renamed him Michelle DuBarry and The Great Imposters.  With every dance step, shake and shimmy Alldread was not just entertaining he was he was writing not only local gay history but how many saw gender identity.

Though some, as you can imagine, did not care for drag and acted out their displeasure. As Alldread recalls some of  those reminders were unpleasant. “We were pelted with eggs and had things thrown at us as we entered gay bars,” says Alldread. “I wouldn’t let them get to me I would just go home put on a different wig and dress and go right back out.”  The small town boy was no longer a drag queen; he was an activist for Toronto’s drag and gay movement.

His activism and gumption would, later on, garner some very official accolades. A letter of praise in July 2005 from then City Counselor Kyle Rae, standing as Pride Toronto’s official Grand Marshall in 2007, and in 2012 he received  the first Lifetime Achievement Award from the Toronto’s Inspire Awards but that’s not all. Alldread embodies his mantra, “always be kind” by volunteering with charities such as: the Princess Margaret Foundation, or TICOT the Imperial Court of Toronto he’s not afraid help out. His refusal to “disappear” is inadvertently giving life to Toronto’s gay senior’s community by rewriting the adage, “gay men are supposed to vanish out of the scene over 80”. Leave it to Alldread to unknowingly break another unwritten taboo.

However, in  February 2016, Alldread, challenged the status quo one more time; by catching the eyes of to Credit David Hawe” width=”222″ height=”300″ />Guinness World Records with a nudge  from yours truly and his friends. After 84 years of raising the bar, never settling for no, fighting back, losing many friends to age and AIDS Alldread got the last laugh. He was awarded the Guinness World Record achievement of the World’s Oldest Drag Queen. At an informal ceremony at his home club Statlers Bar he reflected on his newest title, “There are so many people now gone. I’m really the only of my kind left. “ He accepted the certificate and afterwards did what he does best; performed in a glittering gown, heels and ushered in a new chapter in Toronto’s drag history.

The next day Alldread after the media cameras packed up and the last applause dissipated; his biggest worry was how he was going to answer the 600 or so emails of congratulations and Facebook wishes. I called him and teased if he considered himself a Golden Girl? He chuckled, “I wish; but I just don’t have the time.”

MAX MACDONALD is a media, PR, menswear and creative influencer who brings cool ideas to life. You can follow him on Instagram at: @andthentheresmax and Tumblr at: andthentheresmax.tumbr.com.