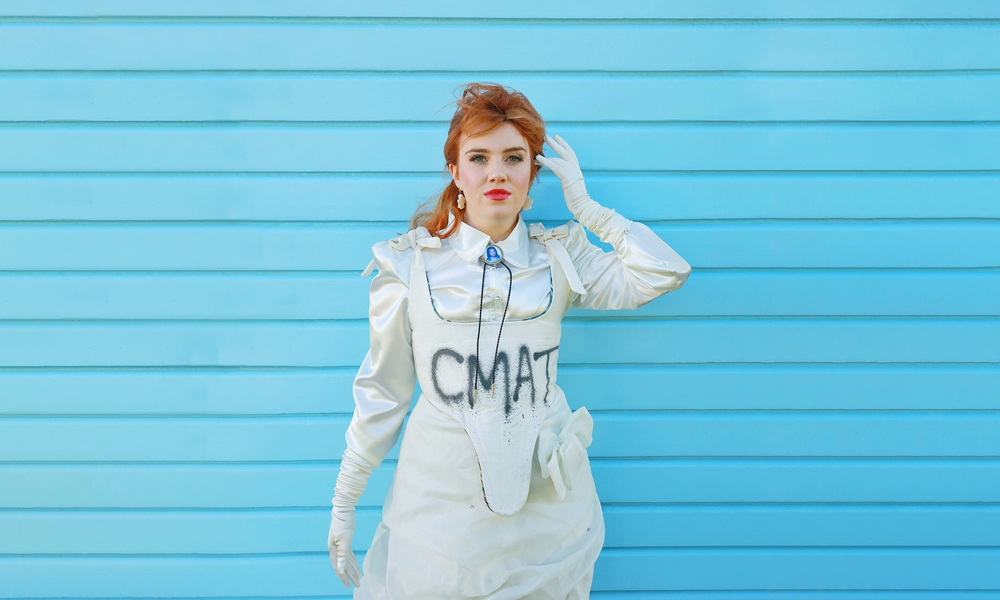 Why You Need To Add CMAT To Your 2023 Playlists

I first came across CMAT through the greatest music recommendation tool of the 21st century: TikTok. The video that popped up on my For You Page wasn’t promoting a new song, however, but was instead a charming Irish woman commenting on the music industry. Her magnetism intrigued me and within seconds I had opened Spotify and clicked on one of her top songs, “I Wanna Be a Cowboy, Baby!” Ever since her hauntingly beautiful vocals and witty lyricism hit my ears, I haven’t been able to get her out of my head.

I flew into an internet frenzy, consuming all the information I could about the new love of my life. I learned that Ciara Mary-Alice Thompson, also known as CMAT, is a self-proclaimed “Global Celebrity Teen Pop Sensation From Ireland” who has declared that everything she does is for the girls and the gays. Her debut album, If My Wife Knew I’d be Dead!, entered the Irish charts at number one in February 2022, and since then she has taken the world by storm on several sold-out tours.

CMAT’s concerts draw huge crowds of sparkling pink that swarm the stage. In Europe, she performs for throngs of people at outdoor festivals and large venues like the Royal Islington Club in London, England, and the Olympia Theatre in Dublin, while her (sold-out) Toronto show took place at the cozier Monarch Tavern. Though I loved the intimacy this offered to the Toronto fans, I couldn’t help but notice the difference in venue compared to the videos I’ve seen of CMAT’s performances across the pond. This proved my theory; most Canadians were ignorant of the illustrious power of this Irish import! Consider this your sign to succumb to mad CMAT disease before she gets so big that an Unnamed Ticket Site oversells her show during the presale.

CMAT’s music mixes infectious pop beats with honky-tonk charm, inducing the need to dance unabashedly under rainbow strobe lights. Whether it’s a pop bop or folksy ballad, you can’t help but sing along through tears as her melodic voice contemplates listlessness and loneliness. No matter how unassumingly fun CMAT’s lyrics may seem on the surface level, they have the ability to pierce straight through to your soul. For example, while her song “Nashville” may seem to be a melancholic goodbye as she moves away from her friends, the underlying emotional resonance hints at something darker. CMAT has spoken about her struggle with depression and how this song was inspired by someone who threw a going-away party so they could say goodbye to their friends and family before killing themself.

Perhaps it is her Irish sense of humour, but somehow CMAT is able to perfectly intertwine sorrow and cheekiness. Nestled between the swirl of emotions in her music, queerness peaks through her lyrics as a subtle wink to her comrades. In a love ballad to 1960s American actor Peter Bogdanovich, CMAT tells him, “If I wasn’t in need of a pawn to take the world, I’d probably be with [your wife].” On the other hand, “I’d Want U” is a song of adoration, if not love, for a girl that CMAT met at a house party.

What is more queer than a song about swearing off a particular Zodiac sign? In the music video for “No More Virgos,” CMAT pursues a mustachioed Virgo while her friend group of Irish drag queens – Lavender, Viola Gayvis and Maura Darragh – attempt to dissuade her from repeating romantic mistakes. Not only is the charade entertaining in its own right, it is a great example of how CMAT creates space to uplift other queer artists in her work.

CMAT’s music videos combine a Wes Andersonian attention to mise en scène with the messy camp of the ’80s. If you explore her YouTube channel, chances are you’ll come across puppets, group numbers with oddly mesmerizing dance moves, and hair “going high as heaven.” In the music video for “Peter Bogdanovich,” CMAT dresses in drag as the eponymous actor navigating an affair on a black-and-white sound stage, and dances with a puppet as the two women vying for his heart share a tender kiss.

Despite appearing charmingly chaotic, CMAT’s refined aesthetic emanates through every aspect of her art, from her music and videos to her funky style that pays homage to queer country icons such as Dolly Parton and Loretta Lynn. Josephine Baker was well known for pulling silly faces, or “mugging,” to inject humour into her performances and gain agency over the way she was viewed by onlookers, and this technique can be seen in both CMAT’s music videos and in-person shows. Her boldly coloured eyeshadow makes her eyes pop as she engages the audience with a story told by her overly exaggerated facial expressions and envelops them into her sense of humour and emotional journey.

Recently, CMAT was set to perform on the main stage at the All Together Now Festival in Ireland when she found out that a TERF had been invited to speak at the event. She took to Instagram and wrote a lengthy story saying, “the entire experience has been tarnished knowing that members of the trans community attending the festival have been made to feel unsafe and unwelcome.” CMAT discussed being unsure of whether or not she should perform, going on to say, “it is really not in my nature to cause problems for my team or festival organizers, especially while everyone in music is still struggling post covid, but i also cannot stand by while people are *literally* getting paid to bully members of the lgbt+ community. my community.” All Together Now then posted an apology on Instagram, and the next day CMAT performed to a huge crowd with a ginormous trans flag emblazoned behind her.

Back home last fall, the air of the Monarch Tavern crackled around me as I waited by the edge of the stage for CMAT to appear. I wore a cow-print two-piece set with a pink cowboy hat and boots to match – something ridiculous but chic enough to make CMAT proud. She came onstage in a tornado of verve and good vibes, throwing her all into every lyric and playing games with the audience between songs. She would later post an apology on Instagram for not meeting people after the show because she was feeling very ill from exhaustion and almost passed out during a number. If that was CMAT on low battery mode, my brain cannot conceptualize how much energy must pour out of that charismatic redhead when she’s feeling 100 per cent.

I realize I may be shooting myself in the foot by encouraging all of you to check out CMAT, and with every word I write I risk not being able to get tickets to her next show. However, I believe it is more important to share her infectious artistry with as many people as possible, as her wacky yet elegant art can resonate with anyone who is feeling down but still wants to dance. Just share your presale code with me.

ROWAN O’BRIEN is a queer writer and filmmaker based in Toronto who loves ranting about LGBTQ+ representation in media while creating their own queer stories. Their queer coming-of-age short film Crushed played at the Toronto Youth Shorts festival, and their next short film, City Limits, will be released this year.