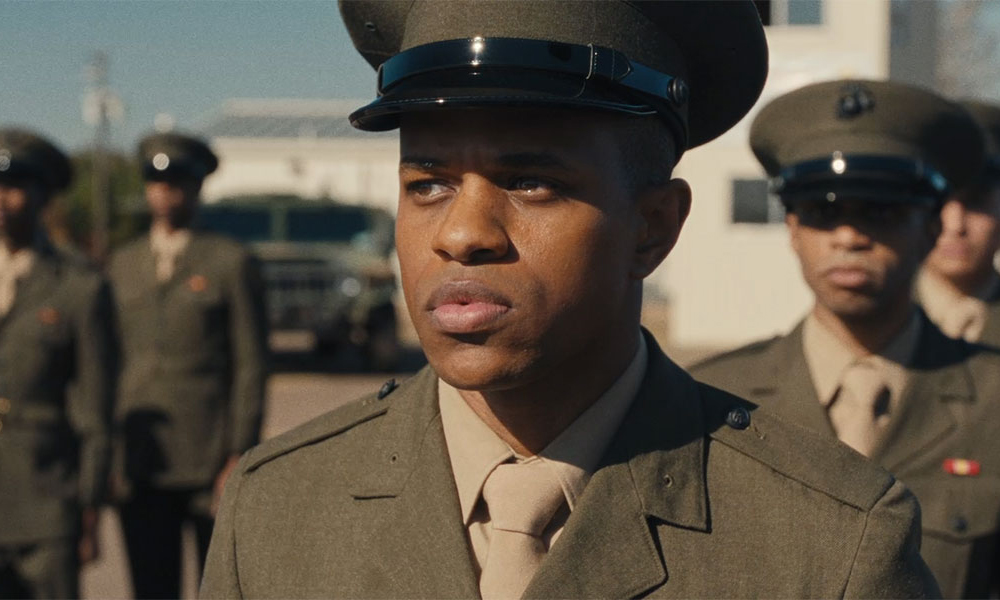 In the film, based on writer-director Elegance Bratton’s own story, a young Black man attempts to make amends with his mother and change his life by joining the Marines in the “Don’t Ask, Don’t Tell” era…

The Inspection, a powerful and moving film, is the first narrative feature of filmmaker Elegance Bratton. Inspired by Bratton’s personal life story, the film follows a young gay Black man who was kicked out of the house at age 16 by his homophobic mother. After struggling on the streets for years, he decides to join the Marine Corp in a desperate attempt to get off the streets and also to win back his mother’s approval. Jeremy Pope of Broadway fame (he was nominated for two Tony awards in separate categories during the same year) gives a passionate and nuanced performance as lead character Ellis French.

The film had its world premiere on the first night of TIFF as part of the Discovery Program at the iconic Royal Alexandra Theatre. Bratton, his collaborator husband and several cast members were present, including Gabrielle Union, who plays his mother and also served as a producer on the film.

During the Q&A after the film’s premiere, Pope joked about how real the boot camp training was in preparation for the film. “I said to Elegance, ‘You know we’re actors, right?’”

Union talked about how difficult it was for her, as someone who supports the LGBTQ community, to play such a homophobic role.

What comes through in this film is Ellis’s pain at being rejected by his mother for something beyond his control. We don’t fully know why his mother had such a difficult time with his homosexuality, but in one scene, where he comes home to get his birth certificate and announces that he is joining the Marines, there are religious artifacts around the apartment. The viewer gets the sense that the mother’s religious convictions have led to her homophobic stance.

During the Q&A, Bratton mentioned that his own mother had not received unconditional love in her life and did not know how to give it. Some of the most powerful moments in the film happen when Ellis realizes that you can have love without acceptance. He indicates that he will always love his mother and be open to hearing from her. The unconditional love he has for her is heartbreaking. “No matter what, I am not giving up on us,” he tells her.

The film is dedicated to Bratton’s mother, who died in 2020. In real life, sadly, he was never able to reconcile with her.

Ellis shows his humanity throughout his arduous experience of boot camp with his fellow recruits.There is the typical over-the-top sergeant (played with fervour by Bokeem Woodbine), who creates dangerous situations, trying to force the obviously gay recruit to quit. We are exposed to the brutality, homophobia and racism that are traditionally part of the military experience.

As the film was set during the “Don’t Ask, Don’t Tell” era, the leaders know they can’t kick Ellis out for being gay unless he admits to it, but they try to drum up hostility among the unit members. Ellis is supported by a sympathetic instructor, Rosales, played by Raul Castillo, who encourages Ellis to stay even after serious attacks. Rosales indicates that if all the homosexual people were to be kicked out, the military would be depleted.

Even though recruits go through hell, the movie’s message is that there are benefits of being a full-fledged Marine, such as a sense of belonging and acceptance – not to mention the free health care, food, a place to live and free education. Bratton certainly made the most of his time there: he first picked up a camera while he was in the Marines, and that led to his journey as a talented filmmaker. In fact, his growing success today can be traced back to his military experience.

In spite of all the pain Ellis goes through in this film, there are elements of humour and sensuality, and an uplifting message of hope. Even after family rejection and intense struggle, the answer lies in belief in one’s self. This is a crucial message for anyone who has had a painful upbringing.

Bratton’s debut film shows great skill in his work with actors, all of whom give realistic and emotional performances. Knowing that it is autobiographical adds to the empathy the audience feels for the raw recruit throughout The Inspection. Elegance Bratton is one to watch, and I look forward to his future films.

This review was filed from the 2022 Toronto International Film Festival. The Inspection opens on November 18.

NEILIA SHERMAN-WATERMAN is a social worker and freelance writer whose work has appeared in hundreds of publications including the Toronto Star, Star Week Magazine, NOW and Canadian Living. Specialities include personal essays, film reviews and travel pieces. Follow her on Twitter @writer2sworker.