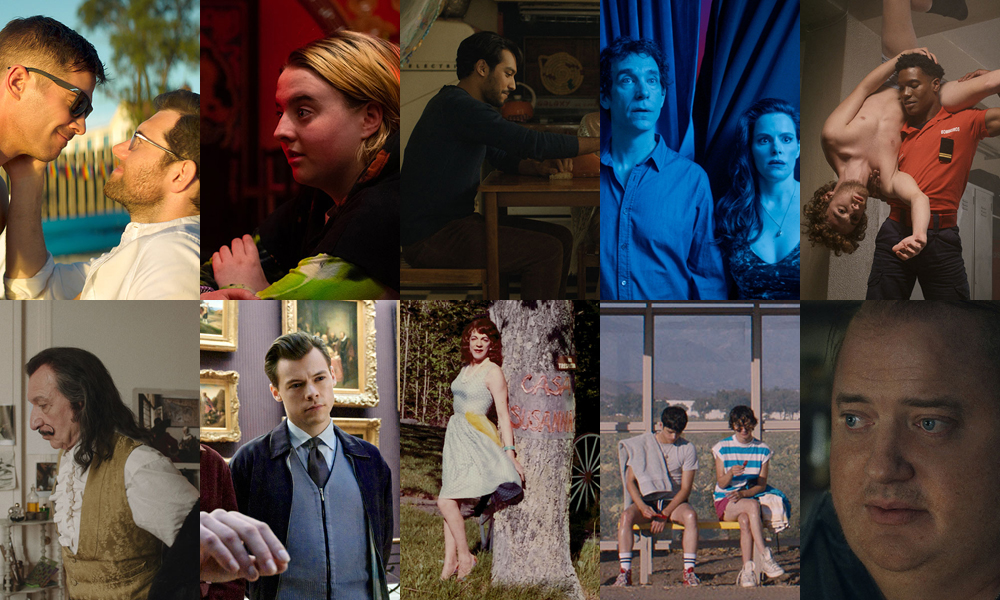 Another season of the Toronto International Film Festival has arrived this week. With 11 days of international and Canadian movies to enjoy, TIFF is promising an eclectic set of films with diverse casts as it welcomes attendees back to an in-person festival. Whether you are attending the festival or are interested in catching all of the event’s glamour, here are some of the Queer films premiering at TIFF that should be on your must-watch list.

The high-profile depiction of modern-day queer love, Billy Eichner takes the world through a journey of self-discovery when swiping right on an app could mean life or death in the dating world. Billed as the first major studio movie to feature an all LGBTQ2+ principal cast playing heterosexual roles, Bros presents the story of commitment-phobic men trying to date one another in an ever-growing world of sexual confidence. The movie stars an ensemble group of actors, including Luke Macfarlane as Aaron, the boy-next-door love interest to Eichner’s Bobby.

A story about how one person can change everything, Queens of the Qing Dynasty explores the relationship between a small-town teenager who tries to commit suicide, only to find a soulmate in an atypical student from Shanghai while recovering in a hospital. Helmed by Canadian director Ashley McKenzie, the film promotes individuality and focuses on two people who would usually be dismissed for how strange they might seem to others. While one character is comfortable in their own queer skin, another is finding their footing in a world where they didn’t know they belonged.

After premiering at this year’s Cannes Film Festival, The Blue Caftan comes to TIFF to tell a story of a woman desperately trying to understand her closetedly gay husband. The Moroccan pair run a caftan shop in Salé when a good-looking man comes to work for them. As Halim (Bakri) mentors the young apprentice (Missioui), something comes to life within Halim, and the two embark on a journey of self-discovery and sexual identity.

A comedic peak into the lives of a married couple desperately needing a little alone time, The End of Sex breathes new meaning into the tedious complications of marriage. With their daughters off at camp for the winter, Josh (Chernick) and Emma (Emily) discover they can’t necessarily rekindle the white-hot passion they once had by themselves. Adding a little spice to their time together, the couple invites another woman into the mix, sparking something inside them that is entirely unexpected. Canadian filmmaker Sean Garrity brings another soulful comedy to TIFF, similar to his 2012 entry My Awkward Sexual Adventure.

Daliland is a controversial depiction of the turbulent marriage between famed Spanish painter Salvador Dali (Kingsley) and his wife Gala (Sukowa) set in 1973. During their later years in Manhattan, the movie comes from the perspective of a young gallery assistant (Briney) as he starts working for the iconic couple, only to discover corruption and greed everywhere. The film traverses Dali’s sexuality and exploration of himself while dealing with complicated relationships that helped forge his brilliance.

Pop superstar Harry Styles leads an all-star cast in My Policeman, a gripping tale of sexual identity and a heart-wrenching look at how intimacy can sometimes disturb the balance of relationships. Based on the novel by Bethan Roberts, this movie follows Tom (Styles), a young police officer in 1950s Britain who falls for Marion (Corrin). They soon meet a museum curator named Patrick (Dawson), who enters into a forbidden relationship with Tom. The love triangle unravels when the film cuts to each character’s older selves, as their shared history becomes a present-day complication.

A joint effort between France and the United States, Casa Susanna is a unique documentary highlighting the vibrant underground group of cross-dressing men and transgender women seeking sanctuary and community during the 1950s and 1960s. Bonded together in a house in the Catskill Mountains, the history of Casa Susanna is subtly and substantially presented by director Sébastien Lifshitz with eyewitness interviews and well-preserved archival footage. Kate and Diana are two key individuals that describe what Casa Suanna meant for them as they faced criminal prosecution for living the lives they were born into when gender nonconformity meant almost certain isolation from the rest of the world.

Based on the book by Benjamin Alire Saenz, Aristotle and Dante Discover the Secrets of the Universe explores the friendship between two teenage Mexican-American introverts in 1980s West Texas. This coming-of-age drama surrounds itself with themes of social anxiety and family trauma, set against a backdrop of conservative politics at a time when being queer meant repressing feelings. Ari and Dante find commonality in being ostracized from loved ones, discovering themselves and the bond they share in the process.

Already gaining buzz at the Venice Film Festival this year for what many refer to as a career comeback performance for Brendan Fraser, The Whale is a deep and heart-wrenching look at loss. Adapted from the stage play by Samuel D. Hunter, Fraser embodies the obese Charlie as he has isolated himself from the world around him after the death of his lover. Charlie had abandoned his family to live life as a gay man, only to binge eat his way out of the suffering he endures on a daily basis. His attempt at reconnecting with his 17-year-old daughter (Sink) may be his only path to redemption.