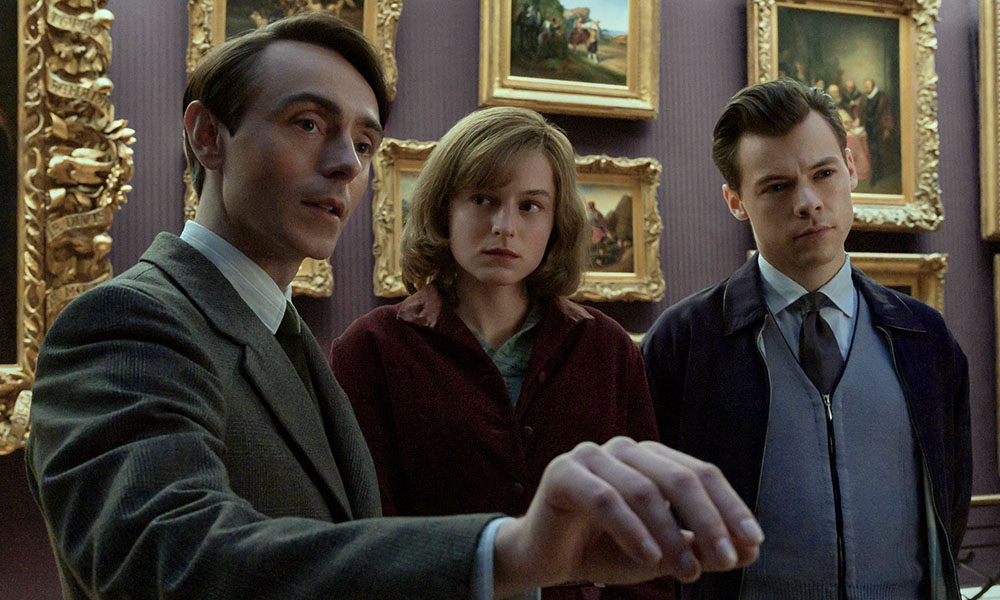 ABOVE: David Dawson, Emma Corrin and Harry Styles in My Policeman

The film, based on the novel by Bethan Roberts, and its tragic love triangle fails to deliver…

“This love is all consuming. I pity people who don’t know what it’s like to be this in love.”

In a time when representation from the LGBTQ2+ community seems to be at an all-time high, queer love stories are breaking through like never before. Major Hollywood studios are now producing romantic comedies like Bros featuring large casts that will no doubt be successful at the box office, particularly with Judd Apatow’s name attached. But not all stories get the Apatow treatment, and many actors seem to be begging to play roles that can demonstrate their range and promote narratives that haven’t been seen on film in quite some time.

The newest effort on this front comes from My Policeman, based on the novel of the same name by Bethan Roberts. Premiering at the Toronto International Film Festival, My Policeman is a compelling story about sexual identity that becomes a heart-wrenching look at how intimacy can sometimes affect the balance of relationships. At its core, it is a tragic love story between three people, but it deviates tremendously into dark waters by introducing indecency laws that plagued the United Kingdom during the 1950s.

Pop superstar Harry Styles stars as Tom Burgess, a police constable in 1957 Brighton, England. After connecting on a beach during the summer, Tom falls in love with Marion (Emma Corrin), a well-read schoolteacher interested in art and culture. Tom introduces Marion to a museum curator named Patrick (David Dawson), whom Tom recently met and has become enamored with Patrick’s knowledge of art. Marion and Patrick seem to hit it off based on their shared interests, and the three happily spend time together learning about fine art. Not all is what it seems, as behind the scenes, Tom and Patrick are carrying out a forbidden love affair that could upend the fabric of all of their lives.

My Policeman jumps back and forth between periods quite frequently, often highlighting instances in the 1950s when the burgeoning love triangle is shaping up to the 1990s when everything has seemingly unraveled. When the film cuts to each character’s older selves, their shared history becomes a present-day complication as Patrick (Rupert Everett) has a stroke and needs to be cared for. Marion (Gina McKee) takes Patrick into their home, despite the fervent objections from her now husband, Tom (Linus Roache). It is not revealed until later in the film why the conflict is so strenuous in their later years, but the tension is ever-present. It is not just a queer love story. It’s a complicated peak into marriage and confronting past traumas.

Directed by Michael Grandage, My Policeman is a torrid love affair wrapped in too dull of a box. Grandage depicts an older version of each character striving for redemption while coming to terms with regrets from their shared past, set against a backdrop of crashing waves on the seaside of Britain. Emma Corrin and Gina McKee are splendid in their portrayals of a wife trying to understand her husband’s actions, constantly doubting what is right and wrong. But, it’s Styles’ performance as Tom that shapes up to be quite bland in its execution, even though he is the name most people are going to see this film for.

My Policeman is terribly melodramatic. If similar movies like Brokeback Mountain didn’t exist, this film might be more effective. However, we already have examples of better stories with two gay male leads pushing and pulling themselves in an era that didn’t accept their love. My Policeman feels like a second-hand version of that, complete with a wife catching her husband in lie after lie and attempting to reconcile with the conflict of what her heart and brain are telling her. Most of all, don’t let the nudity and depiction of gay sex between Harry Styles and David Dawson distract from the flat performance on Styles’ part.

At the press screening for My Policeman at the Toronto International Film Festival, Michael Grandage spoke about what drew him to the characters and story presented in this movie. He commented that as a gay man himself, he was “Born into the England represented in this film.” It’s an England that saw thousands of queer people arrested for the crime of being a homosexual in public, for kissing their partners, for loving someone of the same sex. Harry Styles discussed the idea that Tom has lived with heartbreak and heartache for nearly forty years, and his character is “Frozen in time while others around him grow and change.”

Yes, it’s a love story that should be told, but My Policeman fails to make that story and the consequences of that love authentic.

This review was filed from the 2022 Toronto International Film Festival. My Policeman opens on October 21.