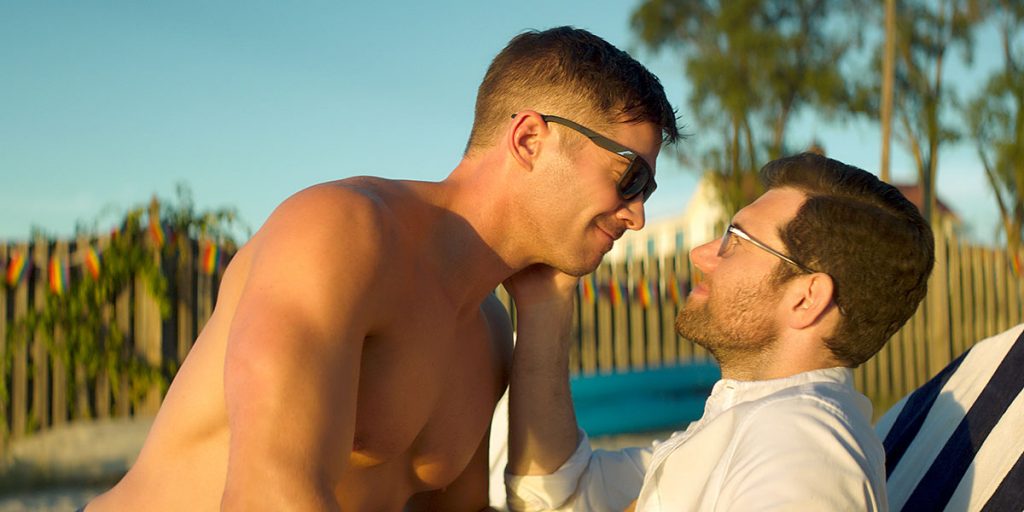 ABOVE: Luke Macfarlane and Billy Eichner in Bros

Bros, co-written by and starring Billy Eichner, is the buzzy depiction of modern-day queer love that has been touted as the first mainstream Hollywood studio-backed rom-com to feature gay men as the leads…

For lovers of romantic comedies, there may be no better era than the 1990s and 2000s. A time when You’ve Got Mail proved that business rivals could fall in love over America Online despite hating one another for most of the movie. We were given Pretty Woman, where a glorified prostitute and her wealthy client fall in love on the streets of Hollywood, California. There was even that time when Kate Hudson tried her best to lose Matthew McConaughey in less than ten days, only to discover they were meant to be after a week and a half together.

Romantic comedies are full of nonsense. They are beacons of hope for those who suspend their disbelief on the off chance that the two main characters might end up together, even if they presented a very different saga for two hours of screen time. But that’s what makes romantic comedies so enticing: They are free of rules in a world where “love is love,” and that feeling shouldn’t be challenged.

Up to this point in cinematic history, the LGBTQ2+ community has rarely been considered part of the romantic comedy genre. Sure, there has been some progress along the way. We’ve had compelling stories from writers like Michael Lannan, who brought Looking to HBO and presented authentic gay characters striving to be loved in San Francisco. There’s the case of Kissing Jessica Stein, an independent feature that challenged the romantic comedy angle by having its central female character decide she wants to start dating women rather than men. Recently, Joel Kim Booster brought us Fire Island, a take on Pride and Prejudice straight-to-streaming movie about a group of gay men on an annual trip to find sex and possibly true love.

Now, the world is lucky enough to be introduced to Bros.

Standing on the shoulders of giants that came before it, Billy Eichner’s Bros is a masterful step in the right direction for romantic comedies that needed a little, dare I say it, flamboyance. Bros is the high-profile depiction of modern-day queer love, premiering this year at the Toronto International Film Festival. Eichner wrote the script and stars in a movie that takes the world on a journey of self-discovery when swiping right on an app could mean life or death in the dating pool.

Bros takes a typical romantic comedy, produced by Judd Apatow no less, and spins it on its head. Presenting a story of two commitment-phobic men trying to date one another in an ever-growing world of sexual confidence, Luke Macfarlane stars as Aaron, the boy-next-door to love interest Bobby, played by Eichner. Aaron is an attractive, country music-loving former hockey player who spends more time at the gym than reading a book. Bobby is a podcast host, expert in gay history, and head of the National Museum of LGBTQ+ History & Culture. Aaron is often described as a boring and unattached lawyer, while Bobby is an assertive, annoying, horrific flirter tired of swiping on Grindr. At one point, Bobby quips to Aaron, “You’re like a grown-up gay boy scout, and I’m whatever happens to Dear Evan Hansen.” They are polar opposites, yet they attract.

Aaron and Bobby’s trajectory is not as simple, similar to other good romantic comedies. They kiss, have sex, get pulled apart, and fight. The hope is that despite their flaws, they somehow end up together. Bros often plays on typical tropes of the genre, making fun of other romantic comedies, Hallmark Christmas movies, and its own place in movie history.

Because at the end of the day, Bros is making movie history. Refreshingly honest and sexy, it is the first major studio movie to feature an all LGBTQ2+ principal cast, with some actors in heterosexual roles. To watch a film and know that every single actor on screen is part of the LGBTQ2+ community is mind-blowing, to say the least. Save for a few celebrity cameos, it should not be understated how important a movie like Bros is to that community and the representation it has strived for.

But let me be clear, this isn’t your straight man’s queer love story. The Love, Simons of the world do not exist in Eichner’s compelling and immersive romantic comedy brain. There is no first kiss on a Ferris wheel. It’s been replaced by group sex scenes that will likely make some heterosexual moviegoers squirm. The fights Aaron and Bobby find themselves in most likely do not exist in many straight relationships, like introducing the idea of having an open relationship at the beginning of dating. Bros is infectious for its updated take on said relationships, hilarious in its execution, and historical in a year alongside groundbreaking movies like Fire Island. Aaron and Bobby’s sex scenes are primal, uproarious, and accurate to the many facets of gay male lovemaking.

For someone like myself who didn’t come out until I was in my 30s, Bros speaks to an audience that never truly fit one specific stereotype of non-heterosexual people. Aaron is not the typical gay man in the sense that straight people tend to view them. He is confident about his body but not about his job. You wouldn’t catch him on a Pride Parade float, and Aaron likely knows nothing about the Stonewall riots. He has dreams but not enough faith in himself to live out those dreams. Bobby is very different. He is well versed in gay culture and complains about what it’s done to modern dating. Bobby knows he’s not the hottest guy in the room but has an allure that commands otherwise. He is the cliched loud, gay voice that stereotypes are born from, but his attraction to Aaron distracts him from being self-reflective. These two characters strive to be taken seriously, even when their antics become anything but serious.

Bros stands alone as an honest and funny depiction of two cis gay men not sure of what they’re looking for. They just know they don’t want to do it alone. It is laugh-out-loud funny at a time when we desperately need to be laughing in a movie theater again. While it tells one couple’s tale and does not reflect every story that can be depicted from the broad and diverse LGBTQ2+ community, it is a huge step up for a genre that has many steps left to go. Bros will likely gross millions at the box office, further introducing a wider audience to the inner workings of queer love. The movie may change the landscape of what the genre is built upon, opening doors for more stories from varied perspectives. It is one part romance, one part gay history lesson, and all things ridiculous.

Just as a romantic comedy is meant to be.

This review was filed from the 2022 Toronto International Film Festival. Bros opens on September 30.