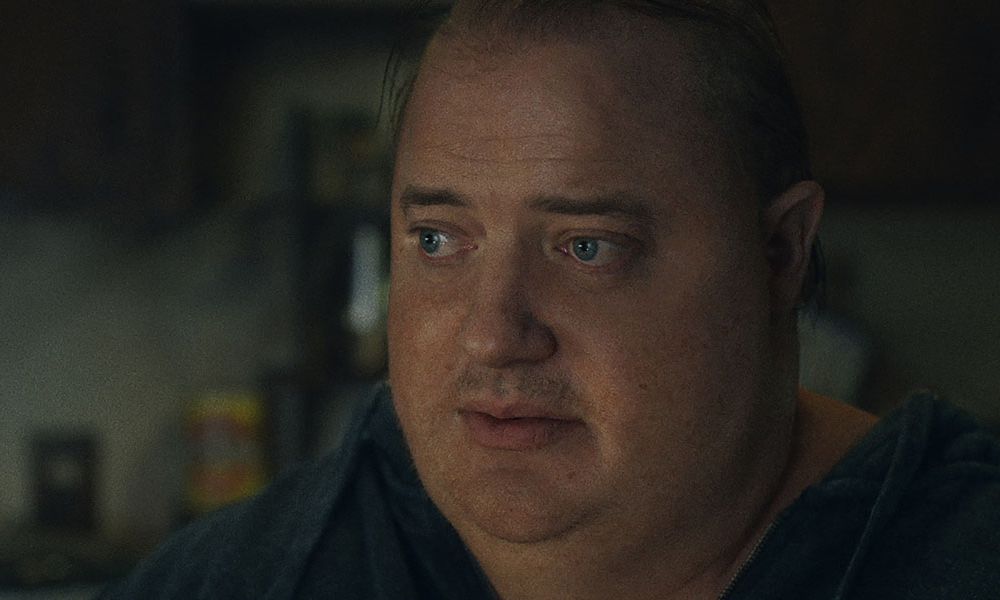 The North American premiere of The Whale screened at the Toronto International Film Festival last week, and Brendan Fraser’s comeback performance in it will surely lead to an Oscar nomination and quite possibly a win.

Like much of the audience at the Royal Alexandra Theatre, I was sobbing for the last minutes of this multi-layered film. The story, originally a play written by Samuel D. Hunter, was painstakingly transferred to the screen by director Darren Aronofsky, who is known to pull out all the stops while staying true to his vision. The Whale is no exception.

Unusual is the fact that the entire film takes place in the apartment of Charlie (Fraser), a man who has become housebound due to extreme weight gain. All of the interactions with the secondary characters take place in his home, and I felt this worked; it gives the viewer a sense of the claustrophobia and loneliness this character is enduring.

Although the film is – purposely – visually muddy, I was transfixed by Charlie’s interactions with all of the visitors to his home, including a Christian missionary, his nurse/close friend, his estranged daughter and his ex-wife. We learn that Charlie has gone up to 600 pounds in recent years. He left his family eight years previously after falling in love with one of his male college students. His partner’s death led to depression and compulsive eating. By the time we meet Charlie, his condition is severe – in fact, he seems to be on the verge of death – yet he is still teaching classes online (with the camera off) and he manages to convince his daughter to visit him, even though he has not been in her life for eight years.

His daughter, Ellie (deftly played by Sadie Sink of Stranger Things fame), is angry: that her father chose his lover over her and her mother, that she only gets to see her father now that he is immobile and near the end of his life, and that her mother drinks and is distant. In order to get her to return, Charlie has to offer to pay her and to rewrite her essays, as she is flunking out of school.

The characters grapple with issues such as the impact of Christianity on the lives of queer people, and how religion and the Bible offer salvation at the cost of non-sanctioned love and intimacy. Charlie’s friend Liz (played superbly by Hong Chau) has been raised by adoptive parents who are obsessed with a Christian group called New Life; Liz has furiously rejected religion, which she sees as responsible for causing family rifts, including the loss of her brother. She brings humour and pathos to the role through her interactions with Charlie, which alternate between vigorously trying to save his life and just loving him as a friend.

Tyler, the missionary, is desperate to help Charlie by “saving” him. He expects him to rise above the sins of the flesh, a concept he takes from the Bible. His conversations with the other characters often turn into debates about religious life. Even if Charlie is dying, Tyler thinks he can “save” his soul.

The Whale graphically and realistically shows what life is like for someone who is morbidly obese. Fraser plays the role with the use of heavy – and realistic – prosthetics, which affect his performance in the way he attempts to stand, walk, eat and speak. Aronofsky does not spare us from the more disturbing visuals that are meant to show us exactly what life is like for this ailing 600-pound man. I was not offended by the portrayal, which some critics have called “fat-shaming.” Just as films about anorexia show extreme thinness, an honest portrayal was necessary to give the audience a true understanding of what this character endures on a daily basis.

Yet although Charlie’s physical struggle is great, we come to know that, despite the looks of his life, he is an eternal optimist who always wants to see the good in people, whether it is his students, his daughter or his sharp-tongued friend.

The emotional impact of the film comes from the fact that even a good, loving person like Charlie can be so self-destructive and hurt people in the process. He unabashedly loves his daughter and tells her she is amazing no matter how callous she is towards him. He encourages his students to just write him an honest fact instead of an overwrought essay on Moby Dick. He believes in honesty and truth above all else – even if it is ugly and it hurts.

Charlie refuses to go to the hospital, even though he is dying – perhaps the slowest suicide possible. His friend Liz laments that he is putting her through having to care for him and watching him eat himself to death. But there is something so warm and human about Charlie that everyone keeps coming back and wanting to save him. As we all learn at one time or another, we can’t save someone who doesn’t want to be saved…but we sure do wish that wasn’t true. That is where the emotional reaction comes from. These relationships deserve to thrive, but they won’t.

Fraser, himself, was quite humble and emotional during an extended standing ovation that took place after the TIFF premiere of The Whale. He was on stage with the writer, director and some of his castmates, and the audience could feel the love and respect in this collaboration. Fraser took a risk and delved into a physically and emotionally devastated character, and he did it with heart and commitment. Seeing his comeback almost makes up for the pain that we feel while watching Charlie’s journey.

This review was filed from the 2022 Toronto International Film Festival. The Whale opens on December 9.

NEILIA SHERMAN-WATERMAN is a social worker and freelance writer whose work has appeared in hundreds of publications including the Toronto Star, Star Week Magazine, NOW and Canadian Living. Specialties include personal essays, film reviews and travel pieces. Follow her on Twitter @writer2sworker.