A plant-filled park in Ottawa with a gleaming thunderhead sculpture at its centre will honour victims of the LGBT purge, which took place between 1955 and 1996…

A national LGBTQ2+ monument — inspired by a dramatic thundercloud — has been approved and is set to be built in Ottawa by 2025. The $8-million monument features a silver mirrored mosaic interior influenced by a thunderhead cloud and disco balls and will include a viewing platform, stage, herb garden, healing circle and seating areas.

It was designed following consultation with members of the LGBTQ2+ community, including two-spirit Indigenous people and will stand in a grassy area on the Ottawa end of the Portage Bridge, which connects Ontario and Quebec over the Ottawa River, just west of Parliament Hill.

The design was described as “inclusive, innovative and thoughtful” by Heritage Minister Pablo Rodriguez who added that it is vital to remember Canada’s history of institutionalized homophobia and transphobia.

“The concept truly expresses the monument’s objectives to educate, memorialize, celebrate and inspire and provides a safe space for both celebration and reflection,” Rodriguez said. “It will forever serve as a testament to the strength, courage and determination of the LGBTQ2+ community in Canada.” 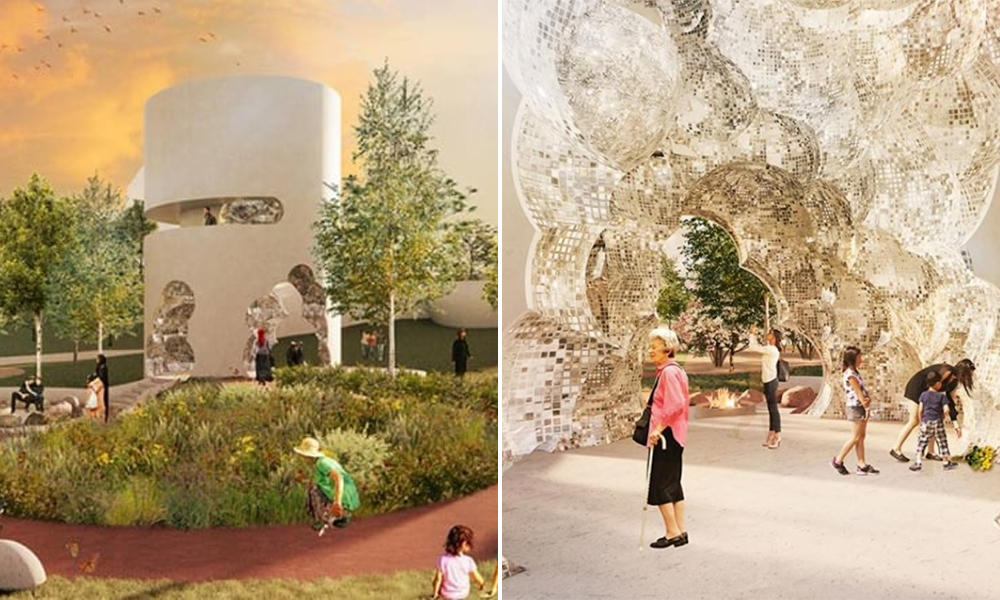 Above: Artist renderings of the national LGBTQ2S+ monument in Ottawa

The LGBTQ2S+ National Monument, which will give visitors views of Ottawa and its namesake river, will be paid for by the LGBT Purge Fund, which was created with the money from the settlement of a class-action lawsuit against the Canadian government. That lawsuit was born from the so-called gay purge, during which several thousand of lesbian, gay, bisexual and transgender members of the Canadian Armed Forces, RCMP and federal public service were investigated, sanctioned and sometimes fired between 1955 and 1996.

In 2017, Justin Trudeau formally apologized to Canadians who were criminally charged or fired from the military or Canada’s public service because of their sexual orientation.

“Our design embodies the strength, activism and hope of the LGBTQ2+ community, and is a lasting testimony to the courage and humanity of those who were harmed by the purge, homophobic and transphobic laws and norms, and Canada’s colonial history,” said Team Wreford, the team behind the winning design that was chosen from a pool of five potential designs that had been released back in November 2021 for public feedback.

“It rises up as our community has risen up to say, ‘We demand change.'”

Visual artist Shawna Dempsey, one of the design team members, said the “110-per-cent queer” monument was meant to be used by everyone.

RELATED:
– ‘We were wrong. We are sorry.’: Read Trudeau’s Full Apology To The LGBTQ Community