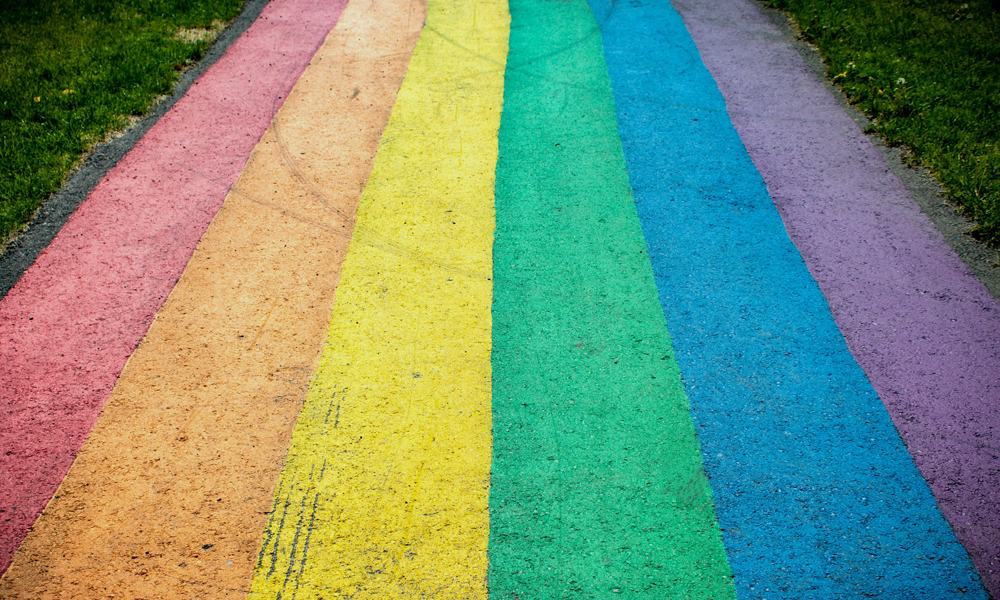 Reflecting on Pride celebrations outside of the big city…

In times like these, sometimes the tonic you need is a seven-foot drag performer in a sequined nun’s outfit, lip-synching to a dance mix medley of songs from the film Sister Act. Drag has been a saving grace for me during the pandemic — a wonderful reminder of the power and whimsicality of queer liberation —and I’d travelled an hour and a half from Toronto to attend drag brunch in St. Catharines.

The trek was further than I normally would have considered, but the host for the brunch was one of my favourite restaurants, Dispatch, and I’m not one to turn down the chance to put delicious things in my mouth. As the drag hostesses Macy Manolo and Claudia Silva camped and vamped it up and down St. Paul St., I reflected on how little I’d thought of Pride celebrations in smaller towns.

Of course, a city of 140,000 perhaps can’t be defined as a small town. Not compared to the ones featured in a new documentary, Small Town Pride, directed by Chelle Turingan and Riley Sparks. The film, the first feature-length documentary from Xtra, travels between three small towns in Alberta, Nova Scotia and the Northwest Territories over the summer of 2019, sharing the triumphs and setbacks of the people planning Pride celebrations there.

The documentary is careful not to villainize nor stereotype small towns, as the adult organizers genuinely love and choose to live in them. The people in the film have their own reasons for moving to or staying in Taber, Alberta (population: 8,711), or Annapolis Royal, Nova Scotia (population: 491), or Norman Wells, Northwest Territories (population: 800). They marvel how, at once, things seem to have changed so much for queer rights, and yet some things remain the same.

That’s not to say that things are perfect. As Ava Pope, a high school student in Norman Wells, notes, being out can be tricky, since once you tell one person, it can spread “like wildfire” in a small town until everyone knows. And bringing change can be hard, as people believe “everything here is good, and we don’t need to change anything, no matter what.”

High school is difficult already with its hierarchical structure and limited mobility, but it’s even tougher when there is literally only one school. Students try to make the gender and sexuality alliance, or GSA, a safe space, when in the moment it can feel like there are so few options. “One of our biggest focuses in our GSA is being there for people who feel like they don’t have anyone there for them,” says Pope in the film. “It’s not like you can have friends from another school or go somewhere else. This is it.”

During the film, I lean in closer as Dora Grandjambe, a teacher at the school, speaks, crediting the young people as the beating heart of the organizing. She acts as a safe harbour for the students, and relates it to her own experience as a residential school survivor. “All of those years, we didn’t have anybody,” she says. “We all had to act the same, but today, young people…they believe in including everybody.”

Change is a recurring theme of the film, and it’s something we in the queer community believe in, and strive for. The film’s origins are also rooted in the power of change. Chelle, writing in Xtra, tells the story of the spark of inspiration:

“My partner grew up as a closeted queer teenager in the 1990s, in a small town nestled in the Ottawa Valley. This was before GSAs existed in high schools or the internet and social media made it easier for us to connect with each other. In 2018, her hometown of Smiths Falls celebrated its very first Smiths Falls Pride. The event moved her to tears, and she said to me, ‘I never thought I’d see this happen in my hometown.'”

That same feeling is echoed by the queer residents of Taber, in Alberta, who struggle to have city council allow them to raise the rainbow flag. In 2018, the first time the flag was raised, it got stolen. A second attempt saw the flag incinerated. Part of me thinks how the actions of a few vandals can create such a massive feeling of unsafety in people, but I realize it’s also how afterwards so few townspeople seemed to care about the homophobic actions.

The film interviews the mayor, who hasn’t shown up for any Pride celebrations because of existing commitments, which immediately sparked echoes of why the one-time Toronto mayor Rob Ford also chose to skip out on participating in Pride. It’s frustrating, but it also draws pity out of me. Maybe because I’m getting older myself, I don’t see them as authority figures or community leaders, but as scared human beings, who’ve discovered the limit of the worlds they want to know.

I get the sense that, for some people, life is safest within very closely drawn lines, and anything outside of that is too weird, too destabilizing — and that makes a town small, no matter the size of the population or the length of its perimeter. What’s magical is when those things that seem foreign turn out not to be scary, when difference is a thing worth celebrating, such as when in 2020 Taber’s mayor sent a message on Facebook during its virtual Pride celebration. People can change.

Thinking of small towns, I drift to one of the most famous fictional small towns in Canada: Schitt’s Creek. At the 2018 Vulture Festival in Los Angeles, Dan Levy explained that there wouldn’t be storylines of homophobia in Schitt’s Creek simply because he has “no patience for homophobia.” Instead, he said: “We show love and tolerance. If you put something like that out of the equation, you’re saying that doesn’t exist and shouldn’t exist.”

Showing a hopeful world like that changed viewers, who began to question their own worldviews. “The letters we’ve been receiving are from people who realized their beliefs were biased or homophobic or bigoted, and we created a space where love and acceptance is paramount,” Levy said. “We’ve watched the growth and comfort of people who outwardly live their lives and aren’t being feared of being targeted. And it has a ripple effect into people’s homes.”

The pandemic showed us that we are more interconnected than we could imagine. And, through the power of the internet, you can watch Schitt’s Creek nearly anywhere, in towns big and small. I hope with time these small town prides bring their participants a level of safety and opportunity and sense of feeling seen. I think about how those of us with established Prides can better support others, especially as a reminder for how important these gatherings can be.

A few weeks after the drag brunch, I find myself travelling again: this time to Montreal. On the train ride home, I strike up a conversation with a few of the other passengers. I mention this article that I’m writing, and a man a few seats ahead mentions that he grew up with so few opportunities to see how wonderfully diverse the world could be. Now there’s even a rainbow crosswalk in the town he lives in, Prescott. When one of his teenaged daughter’s friends came out, it felt celebratory, happy that she was finding herself. Not too shabby for a town with a population of 4,222.