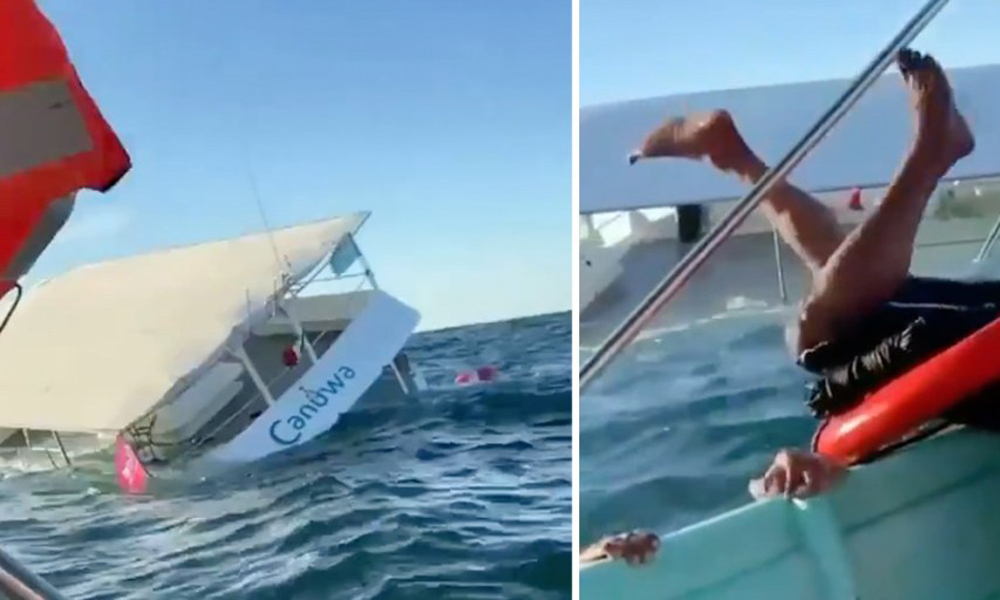 Getting over getting “over it”…

For decades, gays have been known for craftiness with hair, makeup, fashion and décor. In the digital age, gays have also demonstrated a craftiness with memes…and the memes mocking a defiantly non-socially distanced cruise loaded up with 60 partying gays that capsized off the coast of Puerto Vallarta, Mexico, were delicious.

My favourite was a comic strip featuring a cartoon hand labelled “Social Media” that, in the first panel, looked like it was reaching to grab the hand of a person submerged underwater but then gave the drowning person a high five. Every shirtless gay on TikTok had an opinion. “I’m just confused how people can travel to Puerto Vallarta during a pandemic,” said @ericwillztt, “but meanwhile if I go to the grocery store and someone gets too close to me in the cereal aisle, I’m all like: [clip of hysterical Charlotte York-Goldenblatt pulling Carrie Bradshaw away from Mr. Big in the first Sex and the City movie].”

The ill-judged cruise was part of a series of New Year’s parties organized by Los Angeles-based Jeffrey Sanker, sometimes referred to as “the high priest of gay parties,” specifically circuit parties. Though the roots of circuit parties go back to before Sanker set up shop, he can be given credit for helping define the circuit aesthetic: pounding music in huge rooms filled with buff, shirtless men who rely on the music, and often drugs, to strip away sexual inhibitions and transport themselves to another state of being. The peer pressure to have a gym-built body, plus the high cost of tickets and travel, means that circuit boys tend to be in their 30s or 40s, with good incomes and the freedom to jet off on long weekends.

Because circuit boys mostly tick all the privilege boxes, and because of the conformity of their hedonism, they are often the bête noire of the LGBTQ community, easy targets used to symbolize what’s deplorable in gay life. At least for the “good” gays. Because if Puerto Vallarta’s boating accident has taught us one thing, it’s that LGBTQ people can be more reckless – but also more uptight – than straights. We can be kinder but also meaner, more accepting but also more unforgiving. The global pandemic turned up the volume on this Jekyll and Hyde nature of gay culture. You’d think both sides would know better.

“Disgusting you give us gay people a bad name,” wrote one commenter on a sexy Instagram photo of a West Hollywood nurse who posted photos from the New Year’s parties in Puerto Vallarta. “You’re truly nothing more than a plague rat.”

This quote struck me as something that might have been uttered in the early days of the AIDS epidemic. Back then, it might have been said by a homophobic straight person who saw gay sex as disgusting, but it might also have been said by a gay man who, without fail, was celibate, monogamous or practised safe sex, and severely judged those who didn’t exercise the same self-control. For this “good gay,” anyone who did not exercise unfailing self-control was engaging not only in self-harm, but in a greater attack on the gay community.

This urge to assign blame attached itself to HIV/AIDS right from the start, and through the years HIV/AIDS organizations and educators around the world have dedicated resources to fighting this stigma and shame, including trying to change the behaviour of gay guys who treat HIV-positive peers as something to be avoided. Shaming not only harms the quality of life for people with HIV/AIDS, but various studies suggest that it hurts health outcomes – it doesn’t make people behave differently, it just drives the behaviour underground. “Individuals go to great lengths to avoid or circumvent acute shame and potential instances of shameful exposure, even when this avoidance might mean harming the self or others,” Barry Lyons and Luna Doleza wrote in a 2017 paper out of Trinity College Dublin and the University of Exeter.

I know, the differences between COVID-19 and HIV/AIDS are too numerous to list. One is usually spread in situations where consent can be more readily discerned than someone breathing contaminated air. One disproportionately affects certain groups (gay men, drug users), while the other affects anybody who breathes, though it is more deadly for certain groups (the elderly and those with pre-existing health conditions). One can be mostly prevented by using condoms and clean drug paraphernalia, while the other is transmitted though the most casual of social contact. One is a chronic illness, while the other, for most people (though sadly not all), goes away in a few weeks. But when you compare attitudes about HIV/AIDS in its early days to these early days of the COVID-19 epidemic, there are echoes: bogus theories about how it’s spread, bogus theories about how to prevent it and cure it, blame, confusion, denial and, most importantly when it comes to meme production, anger.

Recalculating the risk factor
After almost 40 years of the disease, we’ve gotten better at thinking about HIV/AIDS – analyzing risk factors, preventing it, improving quality of life for people affected by it, seeing how it affects the LGBTQ community as a whole. People internalize all this learning. So it’s possible that gay men who have taken risks during the COVID-19 pandemic – who have embraced forbidden means to socialize, have sex and feel connected – are not such carefree scofflaws. Perhaps because they’ve been wrestling with HIV/AIDS for so much of their lives, they’re deeply engaged in harm-reduction strategies. They’re sophisticated in getting what they want while minimizing, if not eliminating, risk. In fact, they’ve become too savvy for public health experts, who, stumbling through a fast-changing crisis, must give every person the same, simple advice: “Stay home, wear a mask, wash your hands.” By contrast, gay men of a certain age have come to think of risk as personal, something that can be negotiated.

There’s a problem with this. While one-size-fits-all rules are often unfair, creating unhappiness without discernable public health results, personal calculations do open up a margin of error that can be frightening. A to 40.8 per cent. For some, in the era of PrEP and medications that ensure HIV-positive men can’t transmit the virus, these numbers don’t look so bad, even if a forgotten pill causes a new case once in a while. But to apply strategies about sexual health to a still-mysterious airborne disease is a failure to read the room.

Judgy “good gays” scoff at the circuit boys’ compulsion to take off their shirts and dance in crowded rooms, suggesting that they are too shallow to be capable of passing the time in other ways (presumably by reading novels and baking cookies). But you can’t expect someone who’s built a particular lifestyle – even if it’s one focused on drinking, drug use, casual friendships and casual sex – to reinvent himself overnight as a homebody. Particularly when that lifestyle was adopted, in many cases, as armour against oppression and the insecurity that can come from growing up gay in a homophobic society.

Which isn’t to say that circuit boys are victims – or at least bigger victims than other LGBTQ people. But there’s no sense in condemning the party lifestyle as unsustainable in a pandemic because, well, which human being born since the 1918 Spanish flu lives a lifestyle that’s sustainable in a pandemic? If we don’t blame the grandmother who dies of COVID-19 because she couldn’t resist going to a party to see her grandchildren, then isn’t it homophobic to blame a gay man who can’t resist seeing his friends? Are only wholesome people, people who have spouses and children, allowed to assuage loneliness without shame?

“I’m already staying at home. I can’t stay at home any harder,” complained one of the “good gays” on Twitter. But if the shoe was on the other foot, and a virus went after those who failed to regularly stay out past midnight, could this “good gay” manage to haunt the clubs any harder? Just like blue-collar workers have had a tougher pandemic than white-collar workers, certain people have had to make bigger sacrifices – and sometimes dangerous compromises – to get themselves through this awful time. Calling them rats doesn’t make the virus go away any faster. And it probably won’t make them smarten up.

PAUL GALLANT is a Toronto-based writer and editor who writes about travel, innovation, city building, social issues (particularly LGBT issues) and business for a variety of national and international publications. He’s done time as lead editor at the loop magazine in Vancouver as well asXtra and fab in Toronto.