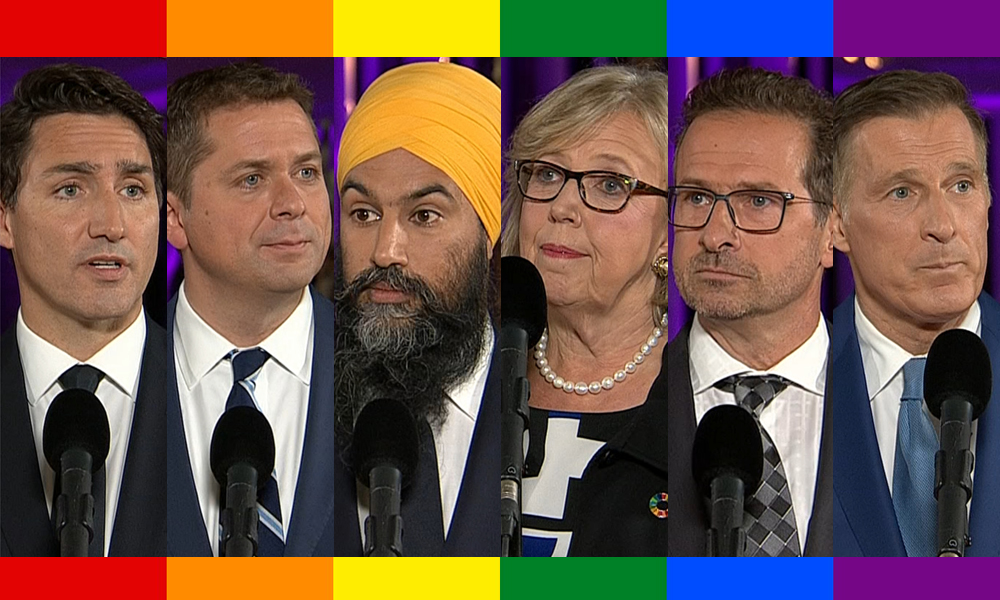 It’s almost time to cast your vote: The next Federal election date is Monday, October 21, 2019…

Election 43 has been a campaign that has really gotten down and dirty. Needless to say there’s been a lot of noise and drama and that has been drowning out the actual issues. So we went looking for where the six federal parties and their leaders (the Liberal party and leader Justin Trudeau, the Conservative party and leader Andrew Scheer, the NDP’s and leader Jagmeet Singh, the Green party and leader Elizabeth May, the Bloc Quebecois’ and leader Yves-Francois Blanchet, and the People’s Party and leader Maxime Bernier) stand on LGBTQ2 issues. While we encourage you to read the platforms and make an informed decision, here’s a quick overview of some of the most important topics facing Canada’s LGBTQ2 community.

Blood donation has been a contentious issue over the years for men who have sex with other men. There used to be a lifetime ban. That ban was lifted in 2013; the Liberals further reduced the ban. Men who wanted to donate blood had to abstain from sex for a year, which was reduced to three months. Justin Trudeau’s Liberals have recommitted to ending the ban.

The Conservatives have said that they would support giving LGBTQ people the same rights as other Canadians when it comes to donating blood. Andrew Scheer has also said he will consult and listen to medical experts.

The People’s Party of Canada and the Bloc didn’t say anything specific on blood donation. In fact, the Bloc didn’t put out any specific policies or promises regarding LGBTQ people. They said that they will continue to support LGBTQ2 rights as they always have.

All the parties agreed that same-sex marriage was no longer an issue in Canada. Scheer has said that he and society has moved on. (He still hasn’t commented on whether his personal views have changed and there is a Conservative candidate Ghada Melek who has apologized for her anti-LGBTQ2 posts) The NDP and the Liberals haven’t addressed any specific same-sex legislation. The PPC’s Bernier has said that he doesn’t plan on touching issues such as same-sex marriage or transgender rights. He also said that party candidates can express their own opinions on these issues.

Speaking of transgender issues, the NDP has promised equal access to gender-confirming surgery. They’ve also promised that related costs will be covered by public health plans instead of out of pocket. The Greens have promised something similar. They have also promised to allow non-binary, Two-Spirit people and trans people to change to their sex designations to match their gender identity on federally issued documents.

The Liberal, Green and NDP parties have promised to end conversion therapy.

The Greens and the Liberals have pledged more funding for LGBTQ2 organizations. The Liberals have pledge $10 million a year over three years with an additional $2 million for mental-health and sex-ed support hotlines. The Greens didn’t put out a specific number but they also want to fund LGBTQ2 youth programs focusing on awareness, promoting better understanding of gender and sexual identities.

The advance polls are closed, but you can get out and vote for your party of choice on Monday, October 21, 2019!