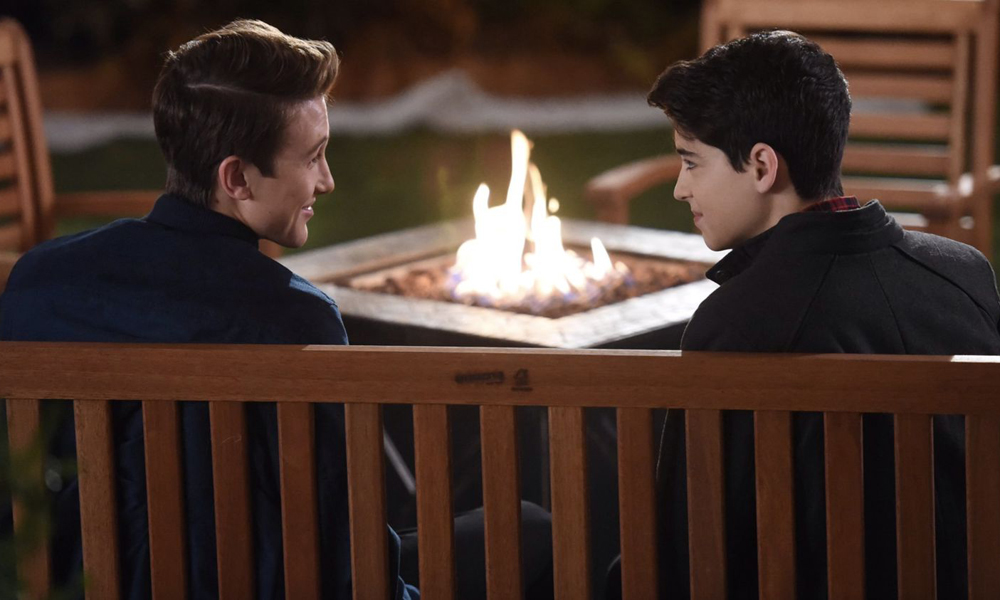 Considering how rarely any show depicts a pre-teen same-sex romance, this is a pretty big deal and exactly the sort of media representation that young queer people need to see…

It was announced in April that the popular pre-teen drama’s third season finale would also serve as its series finale.

Andi Mack made history and headlines back in October 2017 when Disney Channel aired a touching coming out scene during the season two premiere, a first for an original series in the network’s 34-year history. In the pivotal episode 13-year-old Cyrus Goodman (Joshua Rush) finally admitted to himself that he has a crush on Andi’s (Peyton Elizabeth Lee) new boyfriend Jonah Beck (Asher Angel) and confided in his BFF Buffy Driscoll (Sofia Wylie). The series made history again in February 2018 when Cyrus became the first Disney Channel character to say “I’m gay.”

In the final episode, which featured a group singalong of Lady Gaga’s LGBTQ anthem “Born This Way,” Cyrus reunited with friend TJ (Luke Mullen), the once-arrogant captain of the basketball team. The young men shared an intimate moment at a party that indicated they would began dating.

You can watch the scene below:


Andi Mack creator and showrunner Terri Minsky spoke to Paste magazine about the special moment—and why Tyrus didn’t share what would have been a historic TV kiss:

“I feel like… they’re still in middle school, you know,” she explained. “And I know that people do things in middle school, but I guess I feel like it’s so. much. for, you know, the captain of the basketball team, to hold hands with a boy in the middle of a party. Like, the look on his face? I feel like a kiss, in a way, would have not been realistic to these characters.”

“A lot of that story, a lot of that journey between Cyrus and TJ was subtext, and I think that whatever they were saying to each other, they weren’t actually saying in words,” Minsky continued. “And even that final conversation isn’t explicit. I love that they have that moment reaching for each other and holding hands, in my mind, in the world that we live in, in the story of this relationship, that is a lot.”

“In terms of the story, it didn’t need a kiss. Adding a kiss would have been doing it just to do it, to be first, and I didn’t want that. I would love if we were going to go on and have another season or another story, I would love to have the first LGBTQ kiss on Disney.”