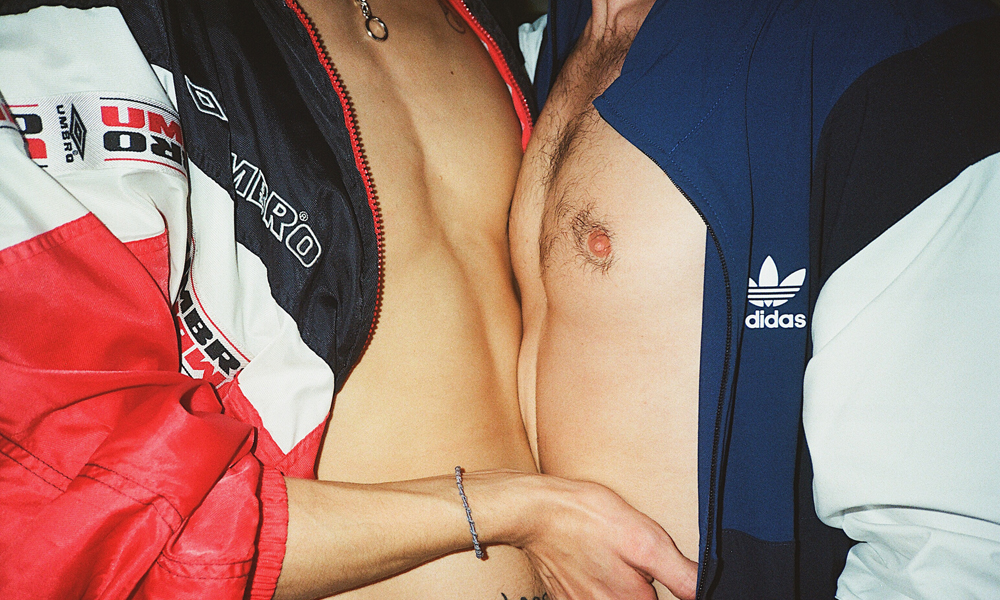 The anonymous hold more power than ever, chronicling their experiences without bias. One of that army of the anonymous, Christopher Sherman, has operated as a guiding force in Canadian fashion over the past 15 years, his anonymity protecting the credibility of his invasive portraiture.

“The greatest collaboration is between me, my camera, the lm and the subject,” Sherman says of his reactionary analogue photography. Film portraiture that feels deeply intimate evades the construction of the self-chronicled on apps like Instagram and Grindr. Although they resemble sexual experiences, the vulnerability of these platonic encounters transcends pornography as a consensual photo-documentary.

Diversity is a clear component of Sherman’s visual narrative. He confronts the traditional depictions of queer-positive body images, as racial and beauty standards are disregarded in the casting process. “Sherman has a great way of making anyone sexy, no matter their shape or where they come from,” says Oly Innes of Daddy Issues, who recently published a queer-positive zine with Sherman’s NSFW photography.

Spike Jonze for American Vogue, Dries Van Noten in his studio, a portrait of Annie Leibovitz, collaborations with gender-bending designer Palomo Spain, to room service with Aurora James of Brother Vellies extend beyond the queer content resonating with audiences on Sherman’s Instagram.

Sherman’s Instagram story (follow him at hellochristophersherman) can best indicate his location, as he has an exasperating schedule scaling the creative between Toronto, New York and the world. IN magazine acquired a rare sit-down interview with the force to discuss his process, rise to acclaim, upcoming self-driven book and exhibition.

Why do you choose to take pictures using 35mm lm instead of digital?
When people are aware of a professional digital camera in an environment, they act very differently. They are prepared to model and put on a show for the camera. I only use point and shoot; you can’t change anything about the camera. You point, shoot and get whatever picture the camera decides to collaborate with you and produce.

What is your relationship with Instagram, which acts as your live portfolio?
My work is the anti-Instagram, or anti-instant. You have to get through a roll of 36-exposure, then go to your trusted photo store to have it developed—and nothing about this is instant.

After being developed and scanned, you then have a window of time to mentally process the image you’re putting into the world. In this horror of instant grati cation, it allows you time to spend with your work and decide what story you want to tell today. 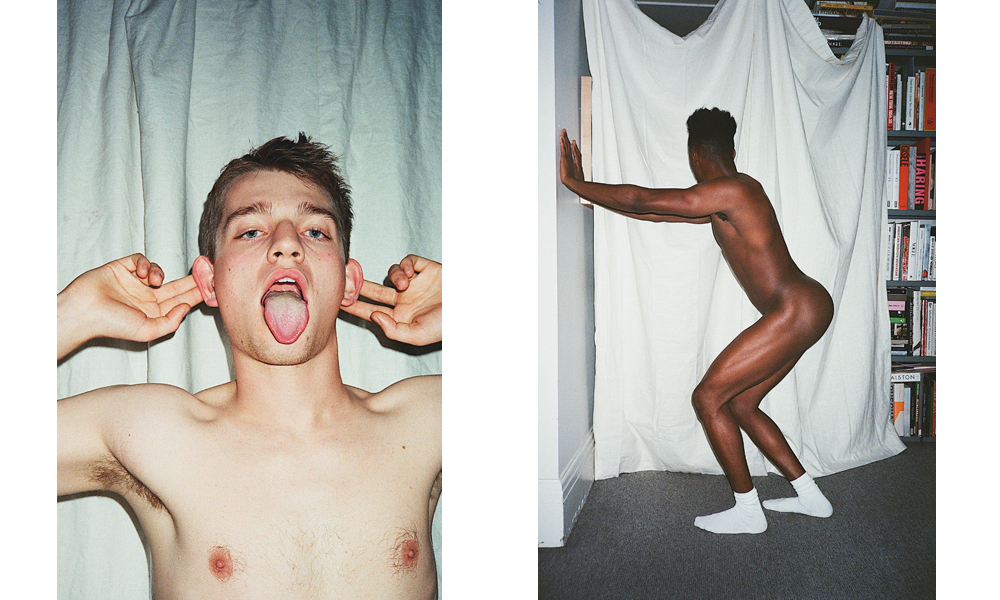 How have you responded to the praise your photography is receiving online?
I truthfully do not care about any of the things associated with Instagram success. I never took a picture for anyone but me.

Casting a diverse range of body types and ethnicities, what do you look for in your subjects?
It’s never been a conscious decision. I think the same is boring. I have days where I think six-pack abs are sexy, I have days where I think love handles are gorgeous, some days I’m inspired by pubic hair or thick thighs. I don’t think life is very exciting if you’re only focusing on appreciating one kind of person.

What process do you go through to cast your subjects?
Very early on I had to beg friends to photograph them, naked or scantily clad. If you look at my very early work, it’s all dear friends. I was very lucky to have a few key people who saw the potential and vision in my work. Now it’s a lot of Instagram, email, conversations with people or meeting people on my travels that both capture my style of photography and your aesthetic. 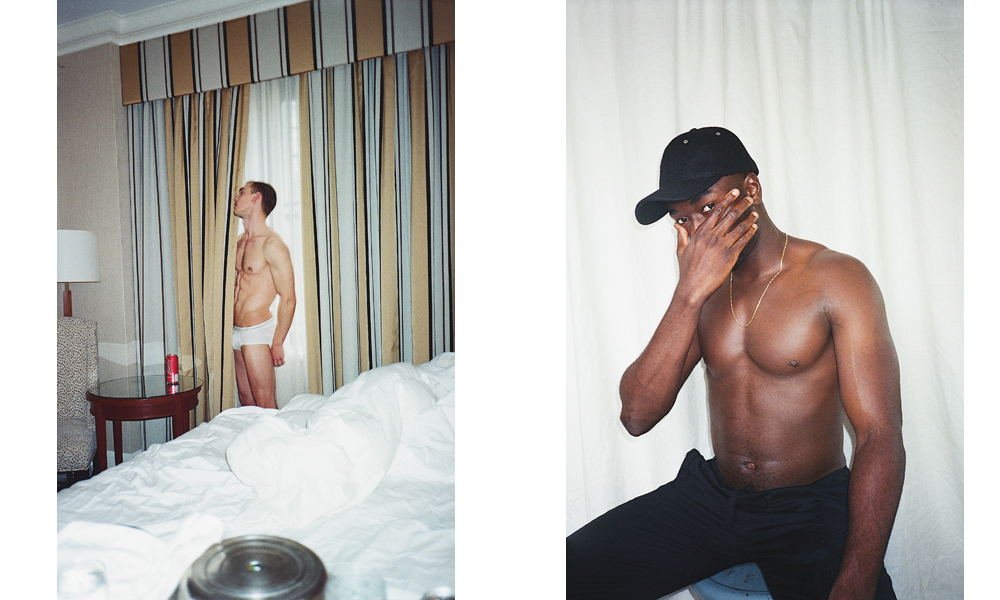 Are you intentionally confronting stereotypes of beauty and sex standards?
I have never seen my work as evaluating or changing standards. I take the photographs I want to take. You will notice there are some people who are naked, in underwear and jumpsuits. It always has to be collaboration. I do not believe in projecting my idea onto someone else. Collaboration is brutally important.

Do you see your photography as promoting queer values?
This is personally how I see sex and sexuality. I am a proud gay man, I always have been, and it was always a non-issue. The dialogue of sex in any form is exciting, challenging and exciting to have. I am a gay man, seeing this through a gay man’s fantasy and energy in life. In turn, it is a story of being gay and a gay perspective.

You maintain a very private identity. Why do you refrain from interviews and being a public gure?
I am not doing any of this for likes, follows or comments. I am taking photographs people understand, relate to and are inspired by. My photographs say everything I want to say. I am really uncomfortable doing interviews and talking about my work. It’s not natural for me. And it doesn’t interest me. 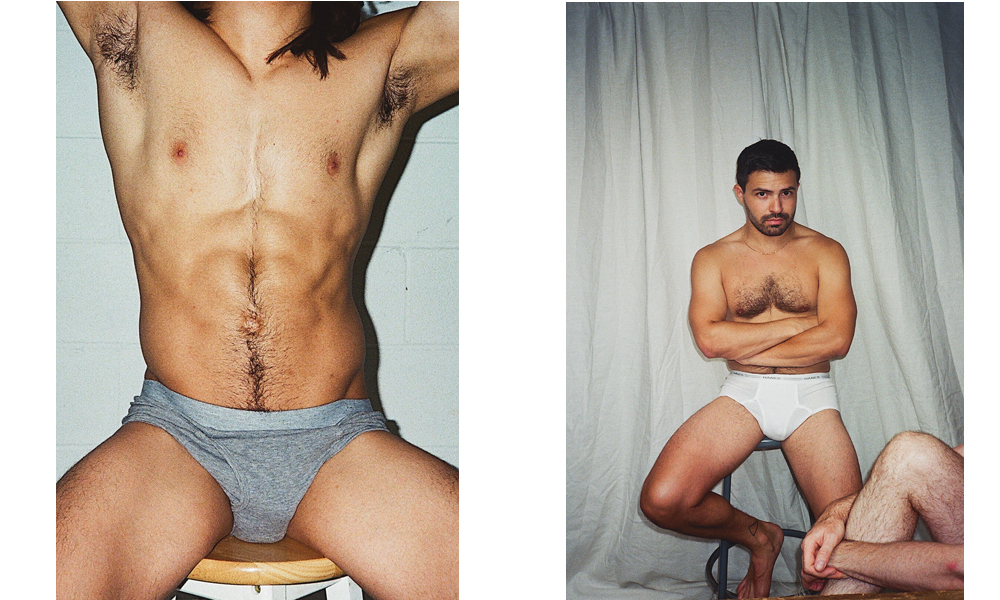 As a Canadian working abroad, do you see a correlation between culture and the experiences these men take you on?
The only things that I nd separates us from the places I’ve shot—from Berlin, Mexico City, Cuba, Hollywood to Toronto—is distance. We are all living in a Kim Kardashian-West world. When it comes to ideas of sex and sexuality, the world is more connected then ever before.

Where do you see this cultural relationship with sex stemming from?
The ideas, posture and movements of what is sexy and sexual is the same in Hollywood or Toronto. We can thank Calvin Klein for this. We’re raised on this iconography and imagery of what sexuality is and how we wish to express it.

What can we expect from your recently announced exhibit and book?
The project is called Thank you for Cumming, based on my favourite bag in New York City, and will be released in 2018. The spelling of ‘coming’ is intentionally changed. It’s focused on my work and collaborations with male subjects. This is still my most inspired and creative work to do with friends, models and people I am lucky to collaborate with. It is a way for me to give back—the proceeds from the works sold at the shows in Toronto and Brooklyn will be donated to local AIDS charities. This is part of the story of sex. There will also be an accompanying special-edition book, treated as artwork instead of mass distribution, with 100 copies to celebrate the collaboration.

MAXWELL N. BURNSTEIN is a Canadian artist and writer who has developed exhibits worldwide, done cover for Elle Magazine to Harper’s Bazaar, and contributed articles to V Magazine and VMan.