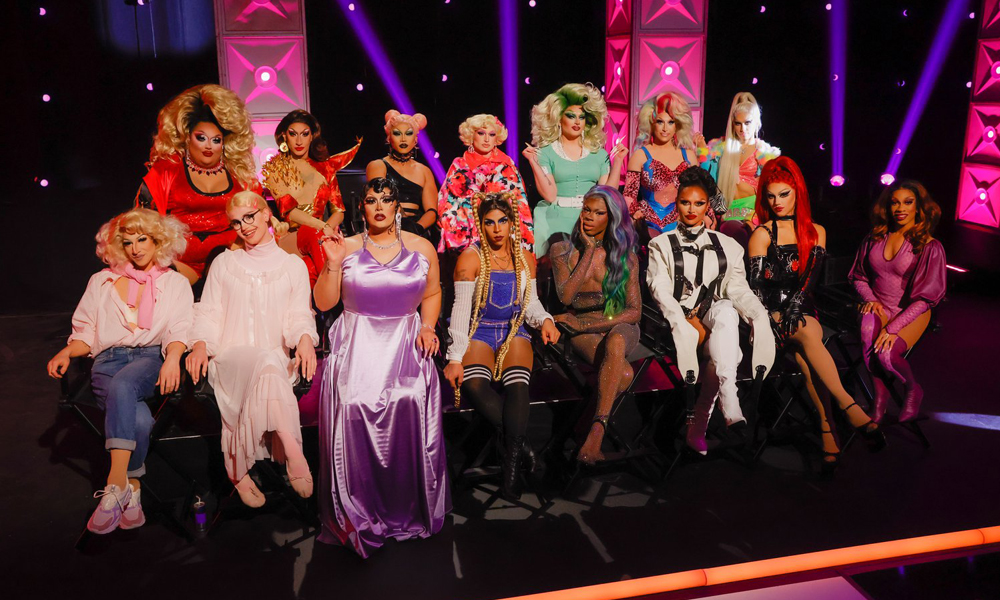 A fresh season kicks off with a new crop of sickening queens and a back-to-back double episode premiere night, featuring a WICKEDly talented guest judge…

It seems like it wasn’t that long ago that the kooky Willow Pill was crowned and it’s already time for us to be introduced to a whole new cast of queens we will all become obsessed with over the coming weeks. Tonight we’ll meet all of the new dolls, see how they perform under the pressure of their first main challenge, and an extra special pop star is our first guest judge. Let’s get into it!

Season 15’s first episode begins in the werk room and the first queen we’re introduced to is Irene Dubois, the alien queen from Seattle. Her drag is inspired by sci-fi fantasy and Bosco is her drag sister, cute! Next up in the room is Luxx Noir London from New Jersey and her aesthetic is stunning diva superstar. The third queen in the room is Aura Mayari. She’s a high-energy dancing queen here to serve performance. Next in the room serving vintage camp is Marcia Marcia Marcia with a nose bandage and all. She’s a trained singer, dancer, and actor, so performance is in her wheelhouse. Anetra is next up and her drag is edgy, sexy, and glamorous. She claims to be a stunt queen, so you know she’s going to bring it to lip syncs. Malaysia Babydoll Foxx from Miami (and the first queen from Miami on the show). She’s a hairstylist and makeup artist when she’s not in drag. Up next in the werk room is Princess Poppy who has a girly and flirty drag aesthetic that clashes with her raunchy performance style. Sasha Colby makes her grand entrance and everyone is eating her up (rightfully so). She is a warrior princess, Kerri Colby’s mother, and this drag legend is ready for battle. Ornacia walks into the room, unzips her jacket, and it’s revealed to be pop superstar and Drag Race superfan Ariana Grande!

Marcia Marcia Marcia is immediately speechless after saying Ariana was one of her biggest inspirations literally moments ago. Ariana thanks the queens and gives them a pep talk before Ru enters the room to formally welcome the queens to the competition. Ru promises that the stunts and shenanigans are just getting started. This season the cash prize is doubled to two hundred thousand dollars, and these queens are fired up. For their first ever mini challenge the queens will pay tribute to season one’s first mini challenge. Ariana makes her exit (until the main challenge) and the mini challenge begins outside. One by one, the queens pose for photos in front of a vintage Mustang while they’re being drenched with garden hoses. Following the photoshoot, the queens de-drag for the first time and get a good look at each other.

They gather round and throw a little bit of shade before Ru re-enters the room and announces the winner of the mini challenge is Irene Dubois much to the dismay of Luxx Noir. For their first maxi challenge the queens will be headlining a talent show to wow the judges with their star quality. But first, they need to show they can work together with a self-choreographed opening number. Out on the main stage the queens get to putting their routine together. Marcia Marcia Marcia and Sasha both out themselves as dancers, and they want to take the lead with creating the opening number. Aura kind of takes over which Marcia doesn’t love and drama ensues.

Back over in the freshly cleaned werk room Salina EsTitties enters and becomes the first of the second group to come to the competition. Amethyst from Connecticut enters and she’s a Y2K-clad comedy queen famous for going viral on TikTok. Jax enters next and she considers herself to be the Simone Biles of drag. She’s an athlete mama, so you know she knows how to compete. Loosey LaDuca is a construction worker by day, but a campy drag queen by night. Loosey is the third queen from Conneciticut in a row to enter the werk room. Mistress Isabelle Brooks from Texas, kitten heels and all. But they’re a safety precaution. No broken ankles this season. Robin Fierce (also from Connecticut) enters, and is it just me or are there a lot of Connecticut girlies this season? Robin and Amethyst have a romantic past that both of them dance around in confessionals. Next in the werk room is Sugar and Spice who are also the first twins to compete against each other on the show. Sugar and Spice though sickening, are strictly social media queens, which means they already have a reputation from the performance veteran queens. Ornaicia makes her second entrance, but this time it’s actually Vivacious.

Ru enters the room and welcomes the second batch of queens to the competition. For this group’s mini challenge the queens will sit on a motorcycle and strike a pose while getting blown away by powerful fans a-la season two premiere. All of the queens take turns straddling the bike, and back in the werk room the other queens talk about how inexperienced Sugar and Spice are and whether they bring enough to the table. Following the photoshoot the queens get out of drag and Ru re-enters the room to announce that the winner of the first mini challenge is Lucee LaDuca. Ru announces the same maxi challenge and the second group heads out to choreograph their own opening number. Back with group one the queens are still rehearsing and Ru enters their space to tell them to eight more dancers (aka the eight other queens). Dun dun DUNNNNN.

The second episode begins where the first left off. Ru leaves to let the two groups get acquainted with each other. They all sit around and kiki, get annoyed with Sugar and Spice and decide to work together to choreograph the rest of this number together. There are officially too many cooks in the kitchen and some of the queens are getting frustrated. Mistress and Irene go at it and everyone eventually gets back to work.

It’s talent show day and the queens enter the werk room to unpack and claim their stations. They start to get ready, compare drag stuff. Irene and Mistress choose stations next to each other because they’re technically friends, and one of the twins calls Mistress the “Mayor of Dragville”. Some of the other queens talk about what they’re doing for talent, and I’m just hoping there aren’t too many “original songs”. All of the queens are pretty much ready, but the twins are trying to track down their wigs while sifting through boxes…it’s pure chaos.

Out on the mainstage Ru introduces this week’s panel of judges, Michelle, Ross plus wedding ring, and this week’s extra special guest, Ariana Grande. The queens take the stage for their big opening number and it goes really well. Up first is Malaysia Babydoll Foxx performing…and original song. Next up is Spice performing another original song which starts in a coffin. Luxx Noir London is next performing…you guessed it, an original song with some choreography. Mistress takes the stage next performing yet another original song. Loosey is next with surprise! Another original song but she’s singing live which was definitely a choice (not the right one) It’s giving… find your pitch. Marcia X3 is back with an interpretive dance dedicated to one Ross Matthrews that breathes fresh life into the talent show. Robin does a dance routine to an R&B classic that doesn’t disappoint. Irene takes the stage to give a tutorial on how to make a glass of ice water…which got no laughs and fell really flat. Anetra has her moment in the spotlight with a performance to an original song that certainly sets itself apart from all of the others thanks to the martial arts moves she’s mixed into it.

Sugar performs another original song and the routine is looking really similar to her twin’s, just in pastel. Princess Poppy performs a duet with a puppet of a parasite. Salina starts her talent of another original song by walking a red carpet but she does have an outfit reveal, so bonus points for that. Amethyst’s choice to perform her comedic lip sync in sneakers is confusing some of the other queens. Aura dances and lip syncs to a BlackPink song and it’s sickening. Sasha performs an interpretive performance to Zombieby the Cranberries and I for one, am gagged. Finally Jax lip syncs and uses her hair to jump rope to Attitude filled with lots of flips and stunts to end the talent show with a bang.

Following the talent show the category on the runway is “who is she?” and the queens each strut in showstopping lewks. Based on their performances and runway, Ru calls Lux, Aura, Malaysia, Princess Poppy, Sasha, Salina, Mistress, Sugar, and Spice forward to tell them that they are all safe. The rest of the queens represent the tops and bottoms. Critiques begin and Irene is up first. Michelle says her talent started promising but all of the judges agree it fell flat. However, all of them love her look. Ross thanks Marcia for her sweet and brave performance. Michelle gives her props for staying in character but the judges clock her for minimal makeup. The judges are gagged with Anetra and Ari calls her “damn talented”. Michelle says the idea of Amethyst’s performance but she gave away the punchline too fast. The judges loved Jax’s performance and love her attitude and look on the runway. And finally, Michelle compliments Lucee on her body but tells her that her live vocals completely took down her performance. Lucee becomes the first queen to cry on the runway.

Following the judges deliberation Ru announces that the winner of the first maxi challenge is Anetra! Jax, Marcia, and Lucee are all safe. Irene and Amethyst are the first bottoms of the season. The two queens lip sync for their lives to 7 Rings by Ariana Grande. Ru announces that Amethyst will get to stay in the competition while Irene Dubois becomes the first queen to sashay away this season.

Next week on Drag Race: The queens introduce us to their version of heaven in their first acting challenge. Country superstar Maren Morris is a guest judge.