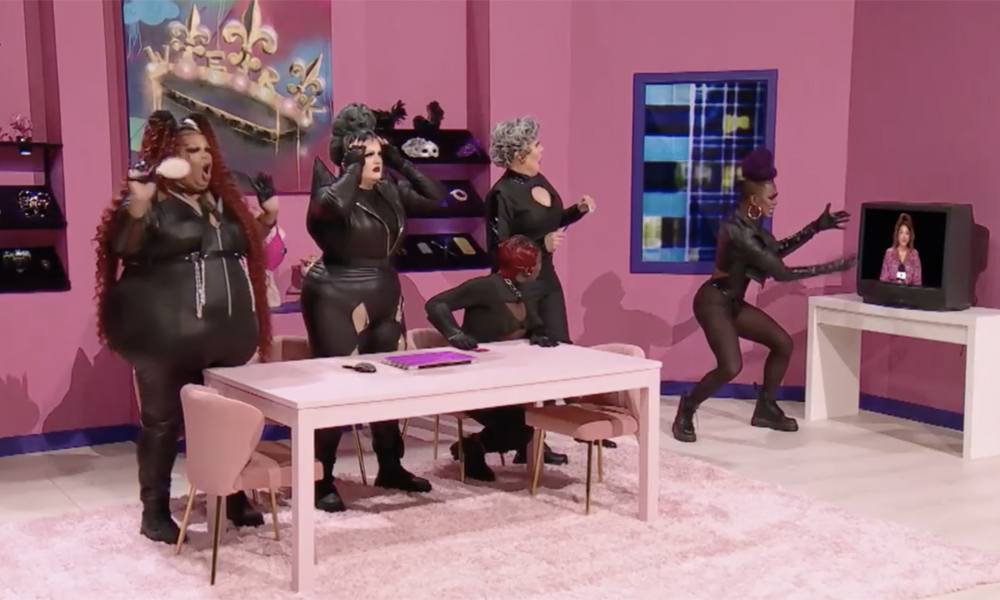 The final five queens become spies in their first acting challenge of the season. Celebrity stylist Joe Zee is a guest judge…

Last week Canadian queen Icesis Couture left the competition to focus on her mental health, meaning none of the other queens were eliminated after their stand-up comedy challenge on the main stage. This week the queens will overact for the camera for their first acting challenge. Let’s get into it!

This week’s episode begins in the werk room following Victoria and Silky’s lip sync: the sequel. The queens gather on the couch and congratulate Victoria on her win. They talk about how much of a rollercoaster that day in the competition was. Both Vanity and Ra’Jah are feeling grateful for Icesis’s sacrifice. Victoria reveals that she had chosen Vanity’s lipstick, but states she is so happy they’re both still here. Silky says for her mental health she will not be revealing who she chose to go home. They all celebrate being in the top five. In private Silky gives Vanity her lipstick and they have a quick heart to heart…there are no hard feelings as both queens have a lot of respect for each other and Vanity says this only lit a fire under her ass for the coming challenge.

It’s a new day and the remaining five walk into the werk room and gather around the table to talk about their track records in the competition. Ru interrupts with a video message about looking for an international women of mystery along with a lot of 007 references which could only mean one thing…Traci enters the werk room and tells the queens that for their next mission this week’s maxi challenge the queens will follow in the footsteps of Canadian spy stars as they act in a movie trailer for Spy Queens. As Victoria is the winner of last week’s lip sync, she will get to assign the roles.

The queens gather on the couches and Victoria says she wants to cast it as fair as she can because she wants the outcome to be good. They read through the characters and Victoria matches each queen up with their roles. Much to Victoria’s excitement, she gets to kiss Silky again this week. All of the queens want to turn it out for their performances and shine on camera. Out in the green screen studio the queens arrive in their costumes ready to ACT. The queens start with shooting solo character intros. All of them ace their first shots. Things move to the actual set and Ra’Jah and Vanity both stumble over their lines but pull it together for the rest of the scene. Silky is acting as herself, which some of the other queens think might hurt her in the long run. In the next scene Vanity keeps forgetting her line and saying it with her back to the camera. Yikes. She certainly isn’t showing the fire she said she would earlier in the episode.

It’s elimination day and the queens talk about how they think their performances were in the acting challenge. They talk about their partners and how their support of them back home helps them in the competition. They also talk about support from their sisters from their seasons of the show. Out on the runway Brooke introduces this week’s panel of judges. Traci, Brad, and this week’s extra special guest celebrity stylist Joe Zee. Out on the runway the category is “Y2Gay” and the queens wow in their nostalgic-yet-futuristic looks.

Following the runway the queens gather on the main stage to watch the world premiere of Spy Queens. The movie is a ridiculous display of physical comedy and the clear stars of the show are Victoria and Rita. Nobody gave a horrible performance, but it’s top five, so judging will be like splitting hairs.

Critiques start with Rita. Brad loved her performance in the movie and said she always commits to a character which the judges appreciate. The judges also love her concept and meaning behind her runway look. Brad tells Vanity that he adores her runway look, but they all agree it’s not really y2k. Vanity tells Traci she didn’t do as well with her character than she hoped she did, which Brooke agrees with. Brooke tells Victoria she appreciates her elevating her catsuit and Brad loves that all of her runway looks are different week to week. Traci tells her in the acting challenge she came in prepared, funny, and ready to play with her costars. Traci tells Silky her intro was bang on for her character, but Brad says the rest of her performance was uneven, and all of the judges thought the kiss with Victoria could have been bigger and funnier. The judges like her runway but Brooke says it looks a bit arts and crafts. Traci tells Ra’Jah that she appreciates that even though Ra’Jah fumbled her lines a bit, she didn’t let it affect her overall performance. The judges also like Ra’Jah’s look even though it’s not really Y2K. Based on the critiques Brooke names Victoria and Rita the top two queens of the week, Ra’Jah is safe while Vanity and Silky are both up for elimination.

Backstage the queens congratulate Rita on her upwards trajectory. Silky doesn’t really agree with her critiques and Vanity is feeling disappointed and defeated. The bottom queens take turns talking to the tops and pleading their case. Silky reminds Rita that they made an agreement, but Rita isn’t sure she’s going to stick with it. Back out on the main stage Rita and Victoria lip sync to “Freak” by Estelle ft. Kardinal Offishall. After a very physical performance, Brooke announces the winner of the lip sync and the power to eliminate a bottom queen is Rita Bagga. The bottom queens take the stage and Rita reveals that the queen she has chosen to eliminate is Vanity Milan, keeping her agreement with Silky after all.

Next week on Canada Vs The World: The final four throw it down in an ultimate smackdown for the crown.