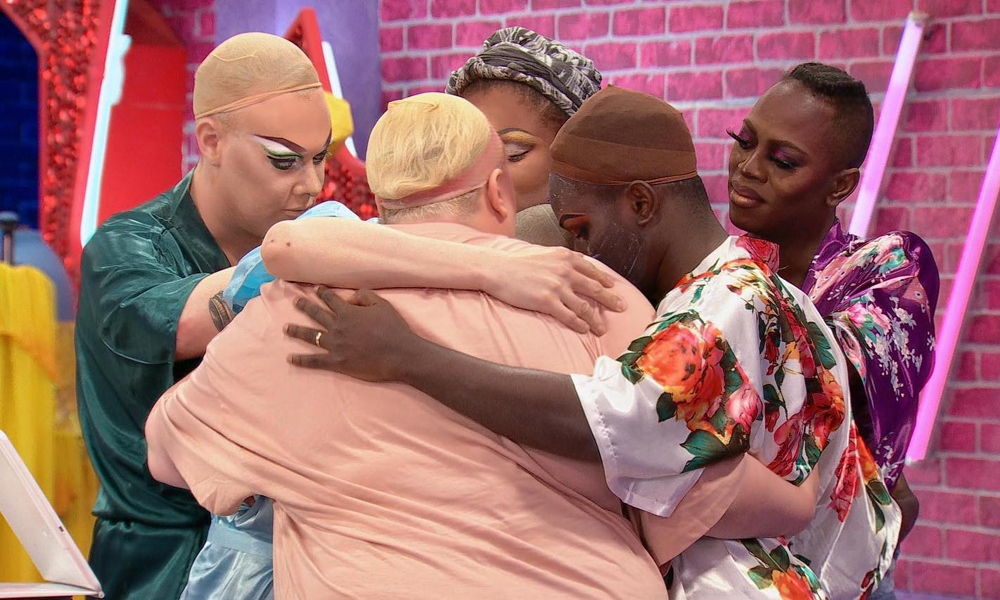 The top six write and perform their own comedy sets, one of the queens bows out, and Emmy-award winning television writer Gary Janetti is a guest judge…

Last week we said goodbye to New Zealand queen Anita Wigl’it after a weather themed ball challenge. The queens brought their best looks to the runway, and after an impressive display, Silky and Victoria were named the top two queens of the week (with Silky winning the lip sync). This week the queens will flex their comedy chops with a stand-up challenge. Let’s get into it!

This week’s episode begins in the werk room following Anita’s elimination. The remaining queens read her goodbye message and Rita is grateful for another shot even though her sister is gone. Over on the couches the queens congratulate Silky and Victoria on their sickening lip sync. Rita says she never cries but her emotions took over on the runway. Victoria reveals she too would have eliminated Anita had she won the lip sync. In confessionals Icesis says Rita needs to step her pussy up as the only other Canadian out. After a quick tally the queens figure out they have all been in the top at some point, will they stop playing fair?

The next day the top six queens make their way back to the werk room and gather around the werk table. Icesis still believes that she and Ra’Jah both deserved top positions rather than the safe spots they were given. Ru interrupts with a video message with some punny hints regarding humour and Brad enters the room to introduce this week’s mini challenge. The queens will record personal video messages for their fans. After getting into media mogul quick drag the queens switch on their ring lights and record their fan messages. Brad names Ra’Jah as the winner of this week’s mini challenge. Brad announces that for this week’s maxi challenge the queens will be the main acts for a comedy show. They will have to come up with their own material that they will workshop with Brad and Emmy award winning writer Gary Janetti (Will and Grace and also, Brad’s husband). Since she won the mini challenge, Ra’Jah will choose the order. After some discussion, the order goes Ra’Jah, Vanity, Rita, Icesis, Victoria and Silky closing the show, much to the disagreement from a couple of the queens. The queens get to writing and some of them are feeling more confident than others. Silky knows she’s funny IRL, but doesn’t know how to translate it to paper. Gary Janetti and Brad await the queens on the stage for their individual coaching sessions. One by one the queens run through their ideas with the experts. A couple of the queens really wow during their rehearsals while others who felt confident about their joke-writing skills have a lot to work on before the challenge.

It’s elimination day and the queens take a temperature check re: comedic skills while they do their makeup. Icesis suddenly gets emotional, so Ra’Jah goes over to talk to her. Icesis reveals that there’s a lot going on with her personal life and it’s become too much to handle along with being in the competition. Ra’Jah helps her come to the conclusion that she needs to leave the competition to take care of her own mental health. All of the queens give her a supportive goodbye, and Silky leads the remaining five in a prayer for some extra strength before heading out to the runway. Out on the main stage Brooke introduces this week’s panel of judges, Traci, Brad, and this week’s extra special guest Gary Janetti!

The comedy night kicks off with Ra’Jah. She does a good job opening the show and hyping the crowd up, but her personal stories didn’t really get a lot of laughter. Vanity Milan is up next and her nerves got the best of her and she has to take a lot of pauses to read her notes. Yikes. Rita is next and she gets a lot of laughter from the unexpected turn her set takes. Victoria Scone follows and her stage presence and jokes get a lot of reaction from the crowd. Silky finishes the show and starts by throwing her notes off the stage. Silky’s storytime about visiting Brooke’s house in LA gets a lot of chuckles from both the audience and the judges and even with technical difficulties involving a container of seasonings and spices, she finished it flawlessly. Following the comedy show the category on the runway is “Plaid Girls Club ”, and the queens wow in their trendiest tartan lewks.

After the runway Brooke makes a quick statement about Icesis leaving the competition and critiques start with Ra’Jah. The judges say she started strong but it took her a while to get to the comedy, but all of the judges are in agreement that her plaid look is stunning. They also love Vanity’s exaggerated shoulder pads and Clueless inspired lewk. Brad says her performance was slightly disappointing after her rehearsal went so well, but the judges say she’s naturally funny, so she’ll get better. Traci loved Rita’s false start and Greg loved that she created her own rules in her routine. Brad loves her runway and applauds her for trying something different. Brad also loves Victoria’s runway and Brooke calls it “an interesting take on plaid”. All of the judges loved how confident Victoria was. It allowed the audience to relax and enjoy her set, and Brad calls her fingering joke THE moment of the night. Finally, Traci tells Silky she had her in stitches. Brooke loves how interactive Silky was but her runway look felt a little “meet and greet” especially after her show stopping outfits last week. Brooke tells Silky and Victoria that yet again they are the top two queens of the week. Rita is safe which means Vanity and Ra’Jah are in the bottom for this week.

Backstage the queens congratulate Victoria and Silky on their second win, but Silky says she’s feeling upset having to pick either Vanity or Ra’Jah to go home. The top queens take turns talking to the bottom queens as they plead their cases. Victoria and Silky pick their lipsticks and head out to the main stage. The two tops lip sync for the power to eliminate a bottom queen to “Your Daddy Don’t Know” by Toronto. Both queens give a passionate performance ending it with a quick kiss. Brooke announces that this week Victoria Scone is the winner. The bottom queens are called forward and Victoria reveals that the queen she has decided to send home is…nobody! Both queens will get to stay in the competition. Everybody lives to slay another day.

Next week on Canada’s Drag Race Canada Vs The World:  The top five take on their first acting challenge.