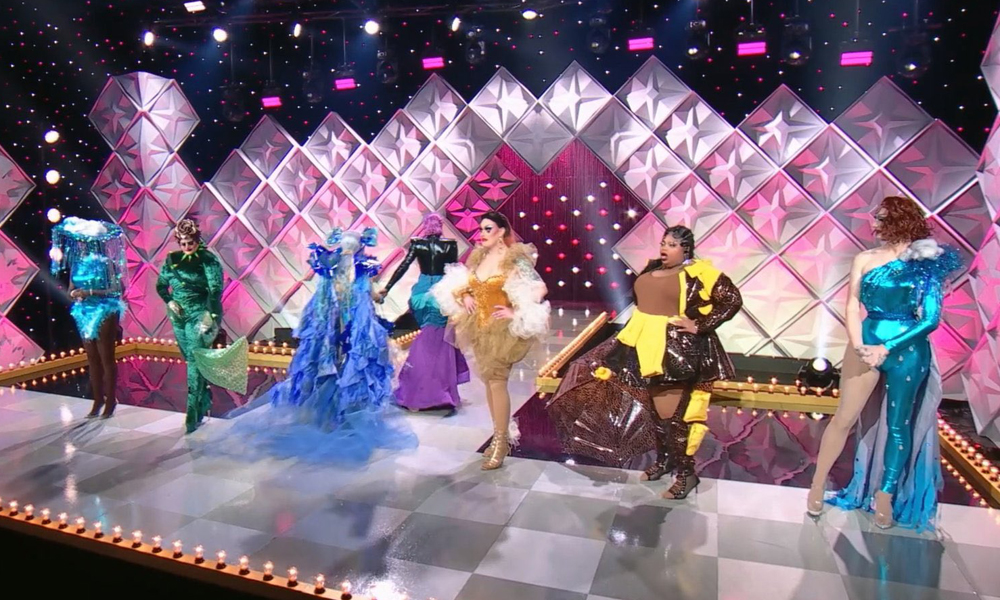 Last week we said goodbye to our second Canadian queen of the competition Stephanie Prince after the Snatch Game landed her in the bottom two for the second week in a row. Icesis Couture and Ra’Jah O’Hara took the top spots after stellar impersonations, and Canadian Prime Minister Justin Trudeao became the first world leader to step into the werk room. This week the remaining queens are throwing a weather ball, and we’re all invited (don’t forget your umbrella). Let’s get into it.

This week’s episode begins with the queens entering the werk room and reading Stephanie’s goodbye message. Over on the couches everybody congratulates Icesis on her win and comment on the fact that two Canadian queens have gone home. Icesis says sending another Canadian home means she’s sent the message to the others that she’s here to play fair. Ra’Jah reveals she also picked Stephanie to go home had she been picked in the lip sync. In confessionals Victoria shares she’s not comfortable being safe anymore.

The next day in the werk room the queens gather around the table. Rita is hungry for a win, the queens once again congratulate Icesis on her win, and everyone agrees that Anita needs to step her pussy up. Ru interrupts with a video message and Brad Goreski enters the werk room to tell the queens that for this week’s maxi challenge the queens will be throwing a weather themed ball! The first category is all about airy and lacy lingerie, the second focusing on arctic eleganza, and the third being a “caught in the rain” look which they will have to design and make from scratch using unconventional materials. Everybody grabs their material and gets to work. Victoria hasn’t done a sewing challenge and Miss Icesis has won a ball. Ra’Jah is also a sewer, so the eyes will also be on her to deliver a sickening collection of lewk. Silky knows how to sew but forgot all of her patterns at home (yikes). Brad does a werk room walk-about to check on the progress of their designs. Some of the queens have elevated concepts, others need a little help with their garments. The queens get back to constructing their garments. Silky does a walk around and realizes a lot of the queens are using the same blue lamé material, and it’s giving figure skating costume.

Out on the main stage Brooke introduces this week’s panel of judges, Brad Goreski, Canada’s fave choreographer Hollywood Jade, and Canadian fashion legend Jeanne Beker. The ball begins with “Air Body Lace” and the queens strut down the runway against a wind machine in their prettiest lace lingerie (ten times fiercer than the VS fashion show IMO). Victoria Scone stuns in a cheeky drag king look that wows the judges.

The next category “Arctic Foxy Lady” features what I can only describe as cozy couture. And finally, the third category “caught in the rain couture” the queens strut for a final time in their creative homemade looks. Brooke calls Icesis and  Ra’Jah forward and tells them they are both safe.

Critiques start with Vanity. Brad says her wind look took his breath away, and Jeanne’s jaw dropped, but the similar second look didn’t make as much of an impact and the judges weren’t impressed with the third look. Brooke calls Victoria’s drag kind look the “look of the night”, loved how different and well constructed her second look was. The judges tell Rita her first look was almost there, loved the comedy in her second winter look but said it was missing something (a reveal), and her third look didn’t really meet the brief. Hollywood Jade says all three of Silky’s looks were different and fabulous. Brad says her snow look was everything he loves about drag. Finally, the judges say Anita’s wind look was the weakest of her three, but Jeanne loved her snow look. Hollywood Jadecalls the third look “a little arts and crafty”. Brooke tells Victoria and Silky that they are the top two queens of the week. Vanity is safe which means Anita and Rita are the bottom queens of the week.

Backstage the queens congratulate Silky and Victoria on their top spots. Ra’Jah doesn’t feel like she deserved a safe spot. Rita thanks Victoria for showcasing Victor on the runway. Rita feels disappointed in herself and is sad to be in the bottom with her bff of the season. Despite being in the bottom, is proud of what she made. The top queens chat with the bottoms and make their decisions. Victoria and Silky choose their lipsticks and head out to the main stage.

The two top queens lip sync for the top spot and the power to eliminate the bottom queens to “Nobody’s Supposed to be Here” by Deborah Cox. Both queens give the lip sync their all. In the end the judges decide Silky Nutmeg Ganache is the winner of this week. Rita and Anita step forward and Silky reveals the queen she has chosen to eliminate Anita, and a Canadian queen is spared…for now.

Next week on Canada VS The World: The queens will work their comedy chops for a stand-up challenge.