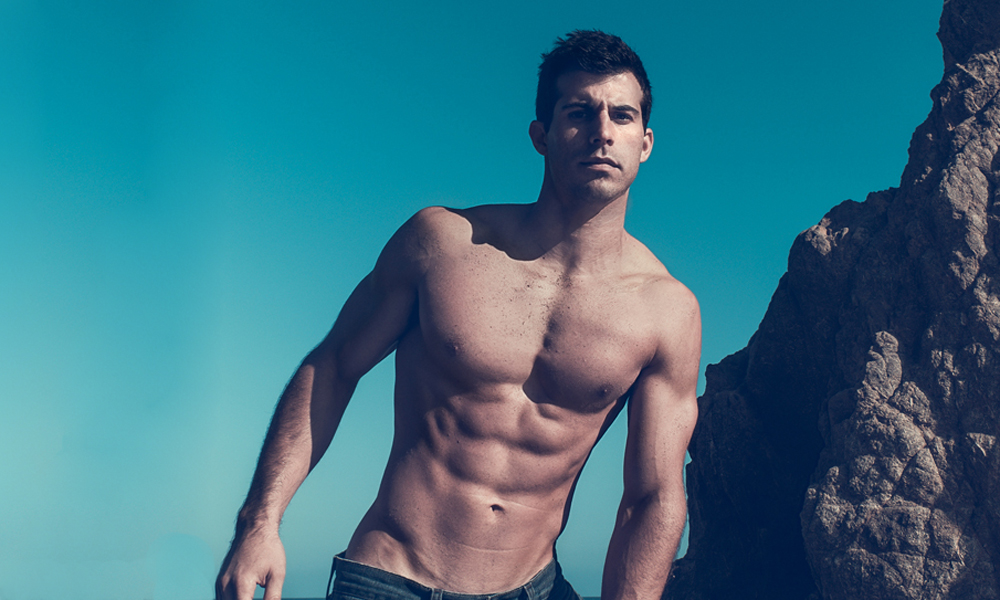 Big scoop at image+nation! Sugar Highs, the most ambitious series from the OUTtv channel, will light up the screens during this 11-day LGBTQ+ film festival in Montreal, months before it hits TV. In the film, Joey Beni plays a handsome guy who has no other ambition than to train, grab his video game console and refine his skateboard jumps. So how can this sexy slacker character make ends meet? With generous sugar daddies!

The actor will walk the PHI Centre red carpet on November 26 with the film’s director, Thom Fitzgerald (The Hanging Garden). This screening and conversations will be part of a series presented by the Canada Media Fund, which is also a funder of the series.  To mark the occasion, we chatted with Beni before the screening.

You will be a guest of honor of image+nation in Montreal this November. How does that make you feel?

I was so surprised! I never really get invited to anything except my friends’ birthdays. I think it’s really cool, and I’m really looking forward to that opportunity – it will be my first time going. I really like going to festivals like that and seeing the stories that other creative people make. It’s very inspiring to me.

Have you been in Montreal before?

No, it will be my first time. I have only been to Halifax and Toronto, but Toronto I just had a short layover and was only in the airport, so that doesn’t really even count! Every once in a while I will take a weekend and go visit a city that I have never been in, just to explore someplace new.  Montreal will be a fun one to explore.

You will be here to present the series Sugar Highs, which will be released later this winter on OUTtv. What can you tell us about the series?

Well, I had a blast filming and I remember laughing out loud when I was reading the scripts. I think it will be a fun show for people to watch. It’s about three roommates who can’t make rent – so, long story short, they decide to get sugar daddies to make life easier…but it ends up just making life a lot more complicated.

Legendary Canadian filmmaker Thom Fitzgerald is directing the series. It’s not your first time working with him. What kind of director is he?

Thom is great. He is a very mellow guy on set and he has a good sense of humour. Before each scene that has us moving around, he lets the actors come in and use the space how we naturally feel would make sense. After some technical tweaks, that is the blocking we use. It gives actors the freedom to do what they feel is natural for their character in the scene. And he always checks in and makes sure everyone is comfortable. I like to try to get a chuckle out of him every day on set. I don’t really know if he is laughing with me or just to get me to leave him alone, but I’m going with the first one.

The second series is already in the works. What can you tell us about it?

Well, things are moving pretty fast and we are all excited! There will be some familiar faces from Season 1, but also some new ones. And we will be filming in Halifax. That being said, I don’t know much else.

You were not born in L.A. What made you move to Hollywood?

I was born in San Diego, and from as long as I could remember I was always wanting to do shows whenever we would have company. I did some community theatre and always wanted to be an actor. We moved around a bit, and I spent some time in Florida and then mostly grew up in Virginia Beach, Virginia. After graduating high school, I felt stuck and nothing was interesting to me. I decided that I loved California and wanted to move to L.A. to make movies. So I worked really hard for two years and saved up some money, and then packed up my car and drove to California. It was scary and exciting but it was the best thing I have ever done.

You’re an actor, but also a writer. Has  writing made you a better actor?

Definitely. When you write, it helps you understand that good writing tells you everything you need to know about the story and the characters: what drives them and what they really want. How do they react when they get what they want, and how do they behave when they don’t get what they want? Your job as an actor is to find that out and connect the dots and fill in any missing spaces. But if the writing is good, there are less spaces you have to fill.

Tell us something about you that we don’t know.

Well, I have been to the equator twice. Two different continents. Once in Uganda and another time in Ecuador.

In March, you broke the internet with a full-frontal screen shot of Demonhuntr. Were you surprised by the reaction?

Yes. I actually filmed that all the way back in 2019 before COVID. It was back when I was just saying yes to any job I could get. I remember being there for about an hour or two, and it was simple and quick and then I went home. Originally it was slated as a web series. I figured it would be like most web series and nobody would really watch it. I was putting on my shoes, about to leave my apartment, and I just started getting all these followers on Instagram and I had no idea why. I finally responded to one of my DMs and asked how they’d found me, and they sent me a link to this site that had this huge database of actors who have ever shown some skin. To be honest, I was so confused because it was from so long ago and I had completely forgotten that I’d filmed that episode. It was from almost three years ago and it’s just now popping up. But my friends and I had a good laugh at the comment section, so it’s all good.

A decade ago, you took part in the dating show The Hook Up. What did you learn about yourself?

Wow, The Hook Up! That was so long ago! I don’t remember much from that except that I was wearing a lime green shirt. My friend was the contestant and he had to bring along three friends to help him decide who to pick to go on a date with. But to answer the question, I learned that lime green is not a good colour shirt for me.

Does the world needs sugar daddies and babbies?

I think so, it’s all about supply and demand!