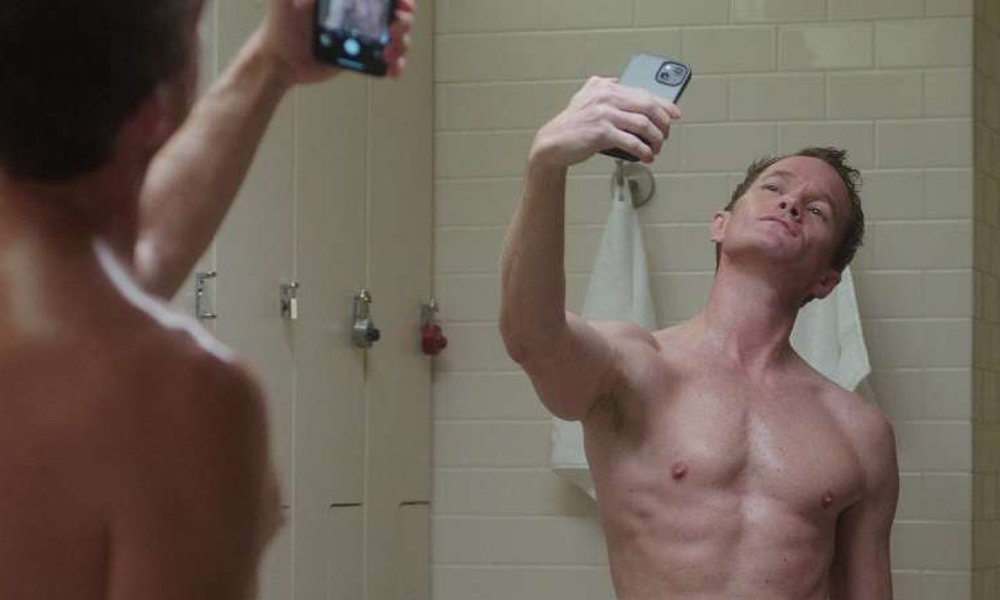 ABOVE: Neil Patrick Harris as Michael in Netflix's Uncoupled

Getting Real About Fake Dicks On TV

I love a good plant-based alternative, but some meat just cannot be substituted…

When actor/hate-crime enthusiast Mark Wahlberg unzipped his fly at the very end of Boogie Nights, what he was unleashing was more than just a ferret-sized extension of fleshy manhood: it led to a trend that 25 years later would plague our televisions with an influx of flaccid faux phalluses. While seemingly mundane and harmless to anyone besides the rubber prop developers who have to explain what they do for a living at dinner parties, this trend of spurious appendages presents not only a new wave of unrealistic body standards but also an imbalance of gendered nudity expectations in entertainment.

For decades now, the presence of T&A on TV has been ubiquitous, thanks in large part to more daring television networks such as HBO, Showtime and AMC pushing the boundaries of risqué content, with more modern streaming platforms extending the trend even further. However, feminists and horny people alike have disdainfully noted the judicious absence of nudity among male leading actors on these shows, something that is just expected of their female counterparts. Even as more male characters have bared their rear ends on camera – although often via the use of a professional butt double – this depiction of nudity among men does not carry the same weight as it does for actresses, who are expected to show not only their rears but their fronts as well; both up top and down low.

While many male actors have advocated for equal representation of skin on the small screen, few have been willing to actually take the bold leap of dropping the towel in front of the camera as their fellow actresses have. In a 2014 interview with GQ, Kit Harington voiced his support for more male “representation” on the then airing Game of Thrones, a show notorious for its excessive exposure of women’s (hairless) bodies. “It’s only right, if you’re going to make a show where nudity and sex is a large part of it, that you be a part of that,” the actor was quoted as saying. Yet when asked about the possibility of his character, Jon Snow, unsheathing his own sword on camera, Harington coyly replied, “I wouldn’t say I’d be happy about [showing my penis]. It would have to be…well deserved.” While Harington would go on to show his bare ass at least once on the show three years later, the King Crow would keep his pecker under wraps to the very end.

But finally, after a seemingly endless Groundhog Day of Meatless Mondays, Hollywood answered our demands for D and began schlepping in the schlong to our screens through attempted representation in primetime shows such as Minx, Big Little Lies, and Sex and the City’s rebooted series And Just Like That. However, what we were given – in lieu of the packages of television’s leading men – were prosthetics hardly more believable than the premium items in your local sex shops. In our demands for more shaft, we had been shafted!

The frustration of this dearth of dick on TV doesn’t derive from the public’s lack of access to see cock on demand (porn very much does exist, folks, as I was reminded by the guy watching it on his phone during my bus ride this morning) but from what this failed attempt at equipoise of the gendered body represents. Directors and producers have long assured female screen actors that showing their breasts, butts and crotches is fundamental to the authenticity of their characters and a staple plot device to moving the story forward. However, this act of exposing one’s body to the general public contains irreversible consequences in the long run, by creating a chronic expectation that these women’s bodies now belong to the viewer in the name of their own amusement. Game of Thrones alumna Emilia Clarke has been quoted revealing that following her run on the show – for which she had stripped bare in the very first episode – she would be reprimanded for “disappointing [her] Game of Thrones fans” by refusing to show her skin on screen in later projects.

Given the implicit expectation that women should willingly drop the sheet for the sake of their jobs, there is something inexplicably ghoulish in the fact that male actors may so bluntly state their discomfort at dropping their drawers – and when that happens, rather than be labelled “difficult” or “demanding” by directors, they are instead gifted with an expensive, custom prosthetic penis that’s perfectly matched to their skin tone and hair type and meticulously installed by a specialized makeup artist. When we say to men that their discomfort at exposing their genitals is valid enough that it should be included in the show’s production budget whereas women’s reluctance to show their breasts may cost them their careers, what are we saying about the value of a woman’s consent?

This inundation of prosthetic prostate-smashers presents an unfair inequity not just to the women of Hollywood, but to the male viewers watching. While unhealthy body standards objectively affect women disproportionately more than men, expectations of healthy or “proper” genital size/appearance continue to baffle men to a concerningly high degree. Outside of the saunas of our local gyms, the only real resource for phallic representation accessible to us comes from the fantasy world of porn, where we are expected to believe that eight inches is a common penis size and that bottoming may readily be performed at the spontaneous arrival of a hot UPS worker. Worse yet, with education being incessantly defunded every year across both Canada and the US and sexual education slowly dissolving in the name of puritan values, young people are increasing losing access to knowledge of their own bodies. (If you don’t believe me, text three cis men right now asking what they believe a vagina should smell like and see what they say…)

In spite of efforts by body positive movements to teach the general public that bodily features of all kinds are to be celebrated, the subject of the penis has remained “bigger is better.” While everyone is entitled to their own preference in body types when seeking sexual fulfillment, there is ruinous risk when we assign value to the parts of the human body. While many believe a mild curve in an erect penis to be a desirable trait, it may be questioned just how commonly it’s known that this curvature is caused by a condition known as Peyronie’s disease, which stems from an excess amount of plaque beneath the skin of the penis, creating amalgamated scar tissue. I apologize if that made Megan Thee Stallion’s “Captain Hook” a little bit less catchy for you.

There is most definitely a place for fake dicks in film and television, but they best belong in the trusted hands of dykes and trans mascs. While men in Hollywood may feel trepidatious in showing the authentic content of their crotches on screen for fear of being either ridiculed or objectified (you know, kinda like women are?), this bold step may not only help impressionable young male viewers at home better understand their own bodies, but also aid their female industry peers in their struggle for bodily autonomy in entertainment. If this is simply too much to ask for, that’s totally understandable – remember that thing called consent? – but the appropriate response then should be for women to rightfully demand prosthetic body parts to protect their own sense of security on set, à la Lily James’ depiction of Pamela Anderson in Hulu’s Pam & Tommy.

But for the sake of reducing our carbon footprint and sparing the production team at Jim Henson Studios (or wherever decoy dicks are made), can men just grow some balls and show them to us?