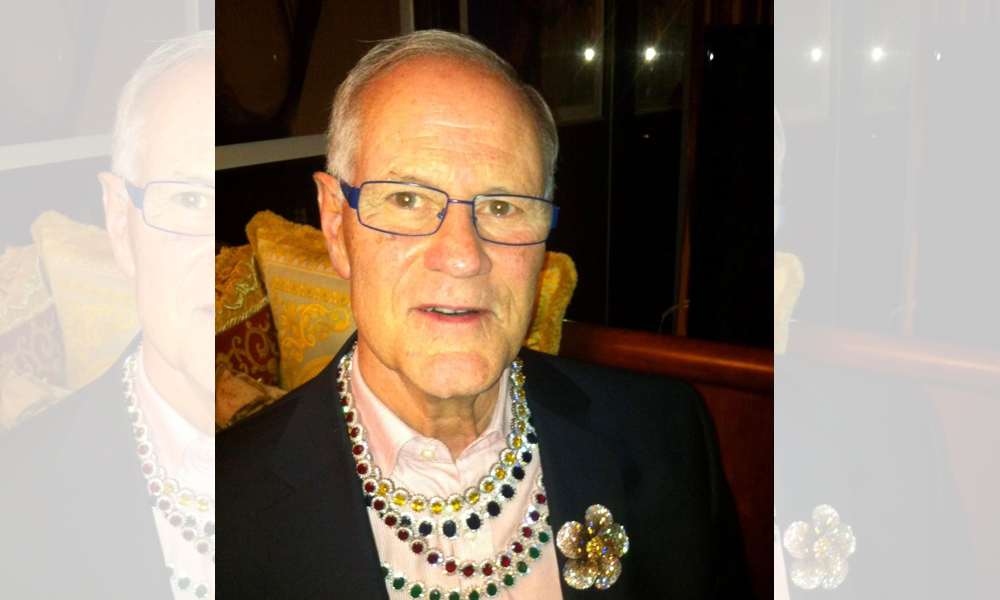 ABOVE: Bill Graham trying on jewellery from Salah Bachir’s collection at his home in Toronto (Photo courtesy of: Salah Bachir)

Bill Graham always said he would meet me one day in Beirut, as the Cabinet Minister had a fondness for the Middle East. I regret that we will never get that chance now after his death on August 7 at age 83. I know he would have loved it.

Over a lifetime of philanthropic activities, I came to know Bill very well. A principled and compassionate man and a dear friend, he towered over many. He always offered his help, advice, and support. Bill was a passionate supporter of gay marriage and The 519 and many other AIDS-related charities in which we were both involved.

Bill would be the first to admit he was a product of white privilege. He had a sincere desire to change things and “make good where I can.”

As a politician, he had been both leader of the opposition and interim leader of the federal Liberals after Paul Martin’s defeat. And he served as both foreign affairs and defence ministers under Jean Chrétien. Bill was in the latter role in 2002 when the government made the principled call not to take part in America’s dismal war on Iraq.

In a statement shortly after Graham’s death, Chrétien called him “a true gentleman in the rough and tumble world of politics.”

But Bill was so much more than a politician and an advocate for important causes. He was involved in and engaged with the community. He was upset when no one asked for his help with a campaign or event.

I have read the outpouring of tributes to Bill. They rightly note that he leaves behind Cathy, his loving wife of 60 years, along with his two children, Katy and Patrick. The memorials, however — including some from within the gay community — scandalously fail to mention his other partner of the last 20 years, a mutual friend who recently sent me a video link to the funeral, which he will have to watch from home, as he was not invited.

Are we not yet past the stigma of recognizing bisexuality and fluid sexual orientation as a reality of the human condition? I had been under the impression that arts patron Joan Chalmers and Senator Nancy Ruth kicked open those hallowed Toronto Rosedale closets long ago with their proud and public relationship.

A loving and supportive partner of 20 years is more than just a casual acquaintance. During the AIDS pandemic, we promised to ask and to tell about our extramarital lives. Are we so ashamed of gay people as to try to erase this man from Bill’s life? Or are we secretly ashamed of Bill?

Secrets are what we decide not to tell each other.

“Flamboyant” is the dog-whistle description Bill was given in a Globe and Mail article on January 22, 2002, headlined: “Flamboyant MP takes his post and prepares to represent Canada before the world.” Reporter Sandra Martin wrote, “Then there is his flamboyant personal life. He doesn’t believe that the stories that circulated in the mid-1990s about his homosexuality kept him out of cabinet. ‘I was made Foreign Minister by the Prime Minister,’ he says when asked about probes into his private life. ‘I believe I have his support and I have the love and support of my family and my friends.’

“‘People might be interested in that aspect of my private life, but it is not relevant to my performance as a politician,’ he says. He says he is ‘at total ease with himself and the respect of my family and friends and the Prime Minister who put me here.’ As for the rest, look to his voting record, he says.”

Bill Graham was “at total ease.” So why aren’t we?

I hope we have come a long way since British society ridiculed homosexuality, as the fictional professor in E.M. Forster’s novel Maurice (1971) does by calling it “the unspeakable vice of the Greeks.”

This is not to “out” or judge anyone. I say this out of admiration and love, knowing the totality of the man. His breadth of sexuality does not in any way lessen his relationship with his wife and family. It is not my business to know what arrangements people come to, but I admire the courage, respect, and self-knowledge it takes to make them.

There was so much to the man. I admired Bill for his bravery and honesty and for not hiding his feelings behind closed doors. We should celebrate everything he was, and not just pick and choose the sanitized aspects of his life. I want to believe that we are less homophobic and judgmental than we were 20 years ago.

My condolences of course go to the family and friends who loved Bill. He was one hell of a lovable friend.

But I will have to watch his funeral on YouTube. Like Bill’s longtime companion, I did not receive an invite. I don’t think I have a suit that fits the dress code, anyway.

SALAH BACHIR is a Canadian philanthropist, patron of the arts, publisher, and entrepreneur.