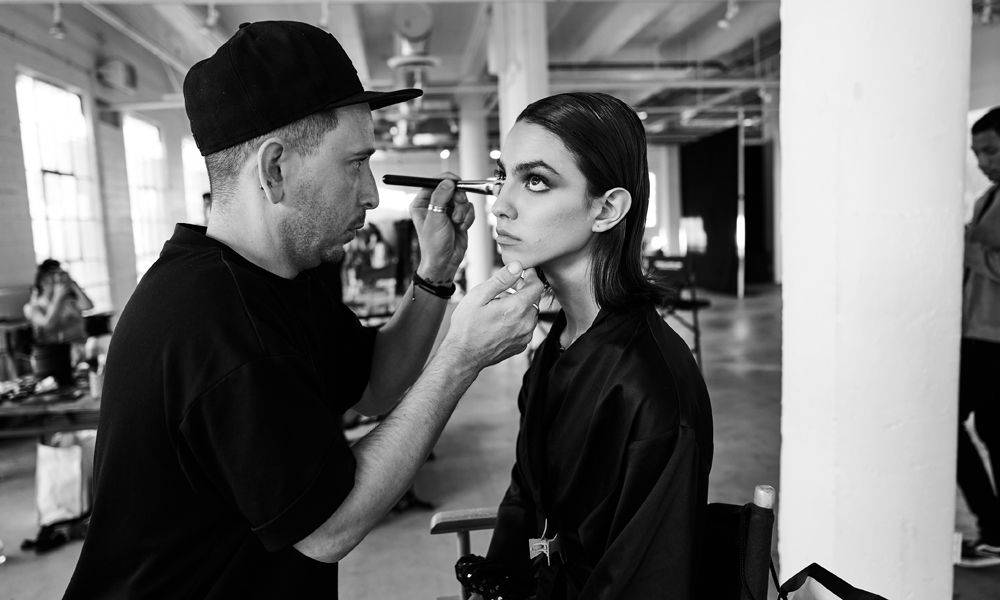 “At a young age, I would flip through fashion magazines and see beautiful women expressing their femininity through photographs, reflects Stefania Bonomo, a transgender fashion model from Toronto. “Seeing them inspired me, because I, too, wanted to express my own sense of femininity.”

“I came home from school one day and my mom showed me a post she had found on her Facebook feed about the search, and suggested I apply,” says Bonomo about how she learned about the competition. Bonomo sent in the application along with a few Polaroids, and was contacted by Slay founder Celicio Asuncion. He told her the competition would be filmed for a show and asked if she still wanted to participate. Bonomo says she jumped at the opportunity.

Executive-produced by Asuncion as well as Phil Anthony and RD Alba, and produced by Emmy award-winner David Millbern as well as Paul Colichman, Stephen P. Jarchow and John Mongiardo, Road to the Runway follows the women to their hometowns to uncover their roots: the environments they were reared in and the circumstances that helped shape them into the beautiful, fashionable young women they are today. It is meant to examine the roles that gender, race, socio-economic status and familial approval play in the lives of these young, beautiful women who aim to become fashion’s next supermodel.

“It was weird having my everyday life filmed,” Bonomo says. She was especially concerned when it came to her mother being interviewed for the show. “My mom and I have a very close relationship. We tell each other a lot of things, so before filming, we discussed boundaries of what could and couldn’t be said,” she laughs.

Bonomo describes her early years in Toronto as “pretty normal.” She grew up loud and expressive with two supporting parents and two older sisters. She didn’t have many neighbourhood friends, but at school she was a social butterfly and loved meeting and making new friends. She was active in dance, where she met the person who remains her best friend.

From an early age, Bonomo knew that she was very different. Her first memory of wanting to transition was at eight years old. She waited to pursue any changes, though, largely because of outside perspectives and her own insecurity. As she grew older, she experimented with different personas.

When puberty hit and Bonomo began to see changes in her body, she grew alarmed. She turned to the internet to see if anyone else was having similar concerns. She found Gigi Gorgeous on YouTube and that led to an epiphany. At 15, Bonomo made the decision to start living life as a woman.

“I received a lot of support, which I am extremely grateful for,” she says today. “I know there are people out there who are not in safe places like I was.”

Asuncion agrees. “The reality is a majority of our models have struggled their whole lives with living as their authentic true selves. They live in a world where simply walking out of the house takes incredible courage.”

Bonomo, too, regularly experiences bigotry from those outside of her comfort bubble. “Ignorance, stupidity, criticism and rejection is something I deal with on a daily basis and have learned to cope with,” she explains. “Being trans and navigating through all of the tough situations matures you a lot. In a year, I feel like I have aged 20 years.”

Ironically, the anguish the women encounter could prove an advantage in the harrowing world of fashion. “Courage builds resiliency, and that kind of tenacity is key to surviving the inevitable pitfalls on the Road to the Runway,” Asuncion contends. “The model life is not an easy one. It is filled with unforgiving scrutinization and unavoidable rejection. It’s not for the faint of heart.”

Asuncion points out that it takes more than beauty to be a bookable model. It takes determination, grit, and a visceral understanding that the woman is a model first, and trans second. “As is often the case in model competitions, the real challenge is an internal one,” Asuncion says. “It used to be that women reshaped themselves to fit the industry standard, striving to match the idealized version of a Barbie doll. Today’s fashion industry wants to see the real, unfiltered woman beneath the lashes and lipstick.”

What trans models have in their favour today – unlike any other time in history – is that clients are looking for diversity and representation. Slay models have appeared in campaigns for M.A.C Cosmetics, Hyundai, Harper’s Bazaar, Vogue Germany, Macy’s and Savage X Fenty. They have appeared on TV in POSE, Law & Order: SVU, Project Runway and Netflix’s Next in Fashion. Arisce Wanzer has been featured on TV shows like MTV’s Ex on the Beach, and in campaigns for Marco Marco, Opening Ceremony, Truvada, AT&T, Lululemon and Lucky Jeans.

The urge for diversity even accounts for why the show was picked up by the network. “At Here-TV, diversity and inclusion remain the central focus of our programming strategy,” says Millbern. “Producing Road to the Runway gives us the opportunity to honour and explore the lives of these extraordinary trans women, many of whom are also women of colour. Their bravery inspires us.”

“The sky is the limit for young women like Stefania,” Asuncion sums up. “She has the passion and drive to go the extra distance.”

See for yourself in Road to the Runway, available on Here-TV.