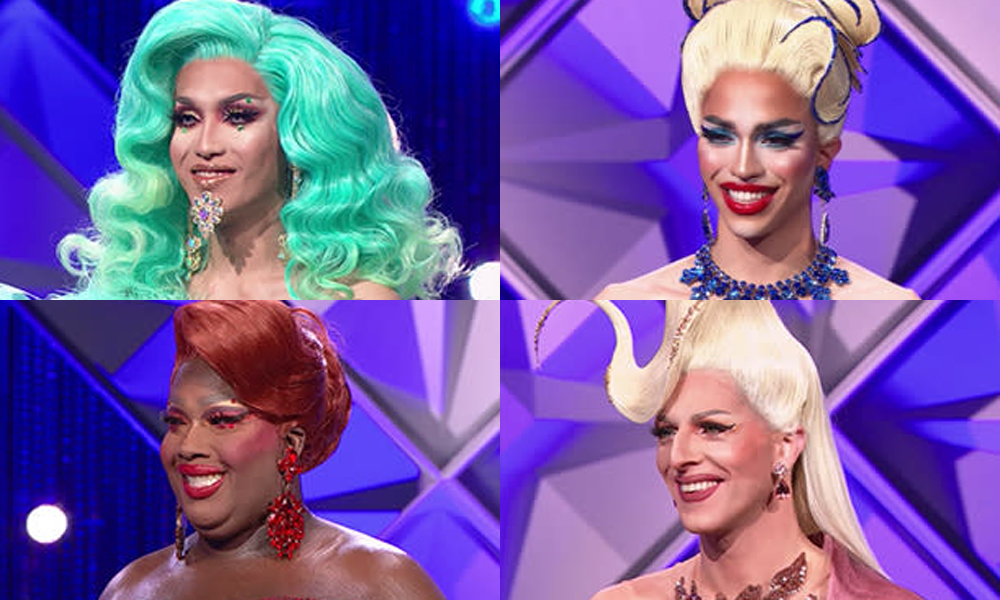 We’ve made it to the end of another season of Canada’s Drag Race. This season we met a whole new cast of talented queens from coast to coast. We watched as they made their way through sewing challenges with hot glue guns, acting challenges, marketing challenges, the Snatch Game, and a Rusical. We’ve finally arrived at the grand finale with our final four. Gisèle, Miss Fiercalicious, Kimmy Couture and Jada Shada Hudson have one final challenge before one of them is crowned as the winner of season three.

This week’s episode begins in the werk room following Vivian Vanderpuss’s elimination last week. The remaining queens read her lipstick message on the mirror before gathering on the couches. The final four talk about making it to the finale, how empty the couches feel, and how diverse this season’s top four is. It’s a new day in the werk room and the queens are giving us fashion for their last time in the werk room. At the tables the queens take a quick tally of all of their wins and all of the times they landed in the bottom. Ru’s video interrupts the conversation one last time, and Brooke enters the werk room to tell the queens that for the last maxi challenge of the seasons the queens will have to write, record, and perform their own verses in a song.

But first they’ll have to take an photo with reigning queen Icesis Couture. Each of the queens ask some questions and take some photos. It’s a drag family reunion for Icesis and Kimmy and the two share a tender conversation before their mother-daughter photo moment.

Back in the werk room it’s time for the queens to write the lyrics for their verses. Each of the queens take a different approach to their writing that is all uniquely theirs. Out on the main stage they record all of their verses with the producer of the moment Miss Brooke Lynn Hytes. Each of the queens add their own personal flair to their songs. After their time in the recording studio they move to learning the choreography with Hollywood Jade. Kimmy and Jada both pick the steps up quickly, and the other two queens do the best they can.

It’s coronation day and the queens get ready for the last time at the mirrors. They all talk about what they’ve learned while being in the competition. Out on the main stage Brooke introduces the panel of judges Traci Melchor, Brad Goreski, and this week’s extra special guest judge olympic athlete Sarah Nurse. The final four perform their original verses and all of them slay their performances. On the runway the final category is “Coronation Eleganza” and all of the queens strut down the runway in their regal best. After the runway Brooke presents the queens with their best photos with Icesis and they each talk about their drag journeys. The judges tell Fierce that she should be very proud of how far she’s come. Kimmy says her journey has been up and down but she presents herself proudly. The judges thank her for sharing her story with the world. Jada says that without drag she wouldn’t be here and that her chosen family means the world to her. Gisèle says she was born to be a drag queen and the judges tell her that her weirdness and quirkiness is what sets her apart from everyone else in the competition.  The final critiques start with Fierce and all of the judges love her performance and her royal blue gown. Next up the judges tell Kimmy she has popstar energy and that she needs  to plan a tour ASAP. Traci loves her final look and says she presented it perfectly. The judges tell Jada her choreography was on fire and that she was in it to win it.They love her “magnificent” crimson look. Finally  the judges tell Gisèle that she was THE one to look for during the performance. Brooke tells her the draping on her dress is beautiful and Brad agrees. The queens head backstage to untuck for one last time while the judges deliberate.

All of the eliminated queens join them backstage and they all talk about their time together this season. Following the deliberations the final four and all of the eliminated queens make their way back to the main stage. Brooke announces that only two queens will be lip syncing for the crown. Jada Shada Hudson and Gisèle Lullaby will face off in the final lip sync. It’s the end of the line for Kimmy and Fierce but it’s certainly not the last we’ll see of these phenomenal queens. Gisèle and Jada participate in one final lip sync to “A New Day Has Come” by Canadian icon Celine Dion. Both queens give passionate final performances.

Brooke brings out reigning queen Icesis Couture (pictured above) and announces that the winner of season three of Canada’s Drag Race is … GISÈLE LULLABY!! Condragulations to our new Queen Of The North.