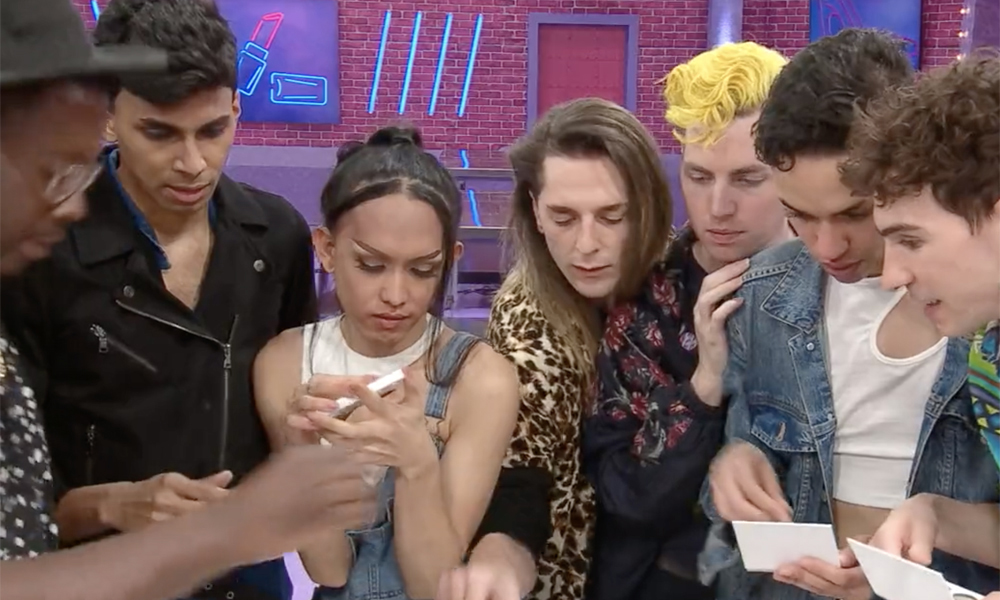 Last week we said au revioir to Quebec queen Lady Boom Boom after our Canadian queens competed in this season’s Snatch Game. While some of them wowed with their stellar celebrity impressions, others left the judges wanting more. This week the queens will have to create and market their own cosmetics before another queen is sent packing. Let’s get into it.

This week’s episode begins in the werk room following Lady Boom Boom’s elimination. Gisèle says she’ll miss her sister so much, and Kimmy wipes her phallic message from the mirror. Over on the couches the rest of the queens tell Kimmy she gave that lip sync her all. Bombae praises everybody for surviving Snatch Game but Vivian is feeling a little bummed she didn’t win last week’s maxi challenge. Everybody congratulates Gisèle on winning the most important challenge of the season, and the queens get out of drag.

It’s a new day in the werk room and the competition is starting to get intense. There are only seven girls left, so there isn’t anywhere to hide anymore. Irma really wants to snatch a win, and Bombae asks the others what to do to avoid missing the mark again. Ru interrupts Fierce with a video message that leaves the queens scratching their heads, but Traci enters the room to clear things up. For this week’s mini challenge the queens will have 25 minutes to create drag family portraits in groups. The groups get into chaotic quick drag and head over to the makeshift department store photography studio to snap their pics. Traci announces that the winner of this week’s mini challenge is Jada Shada Hudson. This week’s maxi challenge is taking the competition to the next level. The queens will have to design and market their own eyeshadow palettes. They’ll have to pick six coloured shadows that reflect their drag aesthetic and film a commercial, but they’ll also be judged on the quality of their makeup.

The queens pick the shades for their palettes and get to work on their commercials. Fierce is feeling ready for this challenge with her background in social media. She knows she can brand herself, so she’s feeling good about showing off her product. Vivian, Irma and Gisèle chat about the comedic tactics they’ll be using to sell their products. One by one the queens use their studio time to film their commercials for their eyeshadow palettes. Some queens have a strong concept for their shoots, while others film through absolute chaos.

It’s elimination day and as they queens prep for the runway they talk about their first experiences with makeup and drag. Out on the runway Brooke introduces this week’s panel of judges Traci, Brad, and this week’s extra special guest makeup artist  and social media maven Mei Pang. The category on the runway is “Paint” and the queens take to the runway in their most artistic lewks.

Following deliberations Brooke announces that Miss Fiercalicious is the winner of this week’s maxi challenge. Kimmy, Vivian, Jada and Gisèle are all safe for the week. This leaves Irma Gerd and Bombae both up for elimination. The two bottom queens ip sync for their lives to “Table Dancer” by Keisha Chanté. Both queens give the performance their all, but Brooke announces that it’s the end of the road for Bombae, and she becomes the next queen to be eliminated this season.

Next week on Canada’s Drag Race: The queens star in their first ever Rusical!