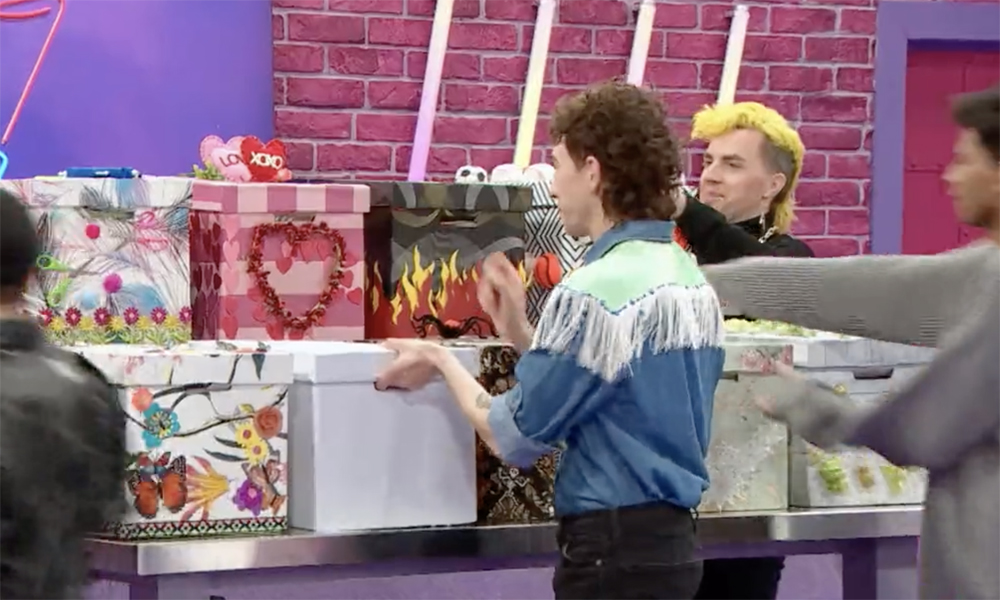 The queens construct looks for the runway using the same exact materials in a Drag Race first. Sarain Fox and Jimbo are guest judges…

Last week on Canada’s Drag Race we said goodbye to Chelazon Leroux after a duo lip sync challenge. Jada Shada Hudson got top queen of the week, and while some of the queens thrived on stage, others didn’t shine as bright. This week it’s another sewing challenge as the queens work with themed boxes to create runway worthy lewks. Let’s get into it.

This week’s episode begins in the werk room following Chelazon’s elimination. The queens read Chelazon’s message on the mirror and gather to talk about the impact Chelazon had with her activism mixed with her drag. Miss Fiercalicious starts to get emotional which cracks Jada right up. The rest of the queens congratulate Jada on her win and correct her on the proper way to say “Irma Gerd”, and that’s with a hard D at the end. It’s a new day in the werk room and the queens are ready to take on another challenge. Around the table Gisèle asks the rest of the queens what they’ve learned in the last few weeks. Fierce brings up how disappointed she is with Jada for not being a good enough friend while they’ve been in the competition. Fierce always seems to be in a one-sided feud with people who have no idea she’s upset with them.

In the middle of their talk Ru interrupts with a message about thinking outside the box. Traci enters the werk room to introduce them to this week’s mini challenge. The queens will have to get into girlboss quick drag and give motivational improv speeches on stage during a Tuck Talk. The queens do their best to roll with the changing slides to present a cohesive speech. In the end Traci announces that Jada has won the mini challenge. Traci then tells the queens that for this week’s maxi challenge the queens will have to think outside the box to create looks out of one of the themed boxes with labels on them. Since Jada won the mini challenge she gets to give out all of the boxes.

After she gives out all of the labels the queens grab their boxes they discover that even though their labels are all different that what’s inside all of their boxes are all the exact same. The queens get to work making their outfits and Bombae says she likes it because it’s a completely level playing field. Some of the queens have a clear idea of what kind of lewk they want to put together, while other queens are kind of making it up as they go. Lady Boom Boom is feeling the pressure to deliver after winning the last design challenge while Kimmy Couture is worried about constructing a look that is very much correct. Traci walks around the room to check up on the queens and it’s clear that some of them are further along than others. After she leaves the queens continue working on their outfits. There’s a clear division between the hot glue girlies and the actual seamstresses.

It’s elimination day and while some of the queens get ready for the runway others are putting the finishing touches on their looks. They all talk about how they got their start in drag which turns into a conversation about gender expression and bio-queens. Out on the runway Brooke introduces this week’s judging panel Traci, activist Sarain Fox, and CDR alum Jimbo. The queens make their way down the runway and the category is “Bitch Stole My Look”. The queens are selling the shit out of their looks whether they’re flawlessly sewn or glued together. After the runway Brooke tells Gisèle, Irma, Kaos, Bombae, Kimmy, and Jada that they represent the tops and bottoms of the week, meaning the rest of the queens are safe.

Critiques start with Bombae. The judges thought some parts of her presentation wasn’t needed, but they love the outfit that was underneath the reveal. Brooke tells Gisèle her look is incredible (it has boning you guys). Traci tells her all of her inspiration came through in her outfit. The judges like Kimmy’s harnessed look and love how she sold it, but Brooke brings up that they have seen this look on her before. Brooke tells Irma this is the first time she’s come alive on the runway, but says it didn’t translate to her “somewhat messy” look. Brooke asks Jada to explain her look and all of the judges agree it didn’t quite land. The judges tell Kaos they appreciate the craftiness of her paper gown but say that it’s not only similar to something she’s already worn and it  was  hard for her to move in. Brooke asks the queens who they think should go home this evening. Bombae says Kaos, Gisèle says Jada, Kimmy says Jada, Irma says Kimmy, Jada says Kaos and Kaos says Jada. Backstage some of the queens argue with Bombae about her opinion on their looks. There are fights between the hot glue girlies which transforms into words between Kimmy and Fierce over their partnership in week two. OOOOF it’s getting messy in untucked y’all.

After deliberations Brooke announces Gisèle is the winner of this week’s maxi challenge. Bombae, Kimmy, and Irma are all safe for the week which leaves Jada and Kaos both up for elimination. The two bottom queens lip sync for their lives to “Stranger In My House” by Tamia. Both queens give a strong performance with wig reveals, spins, and splits. The judges decide Jada will live to slay another day and Kaos is the fourth queen to be sent home.

Next week on Canada’s Drag Race: The queens take part in the make or break challenge of the season…Snatch Game!