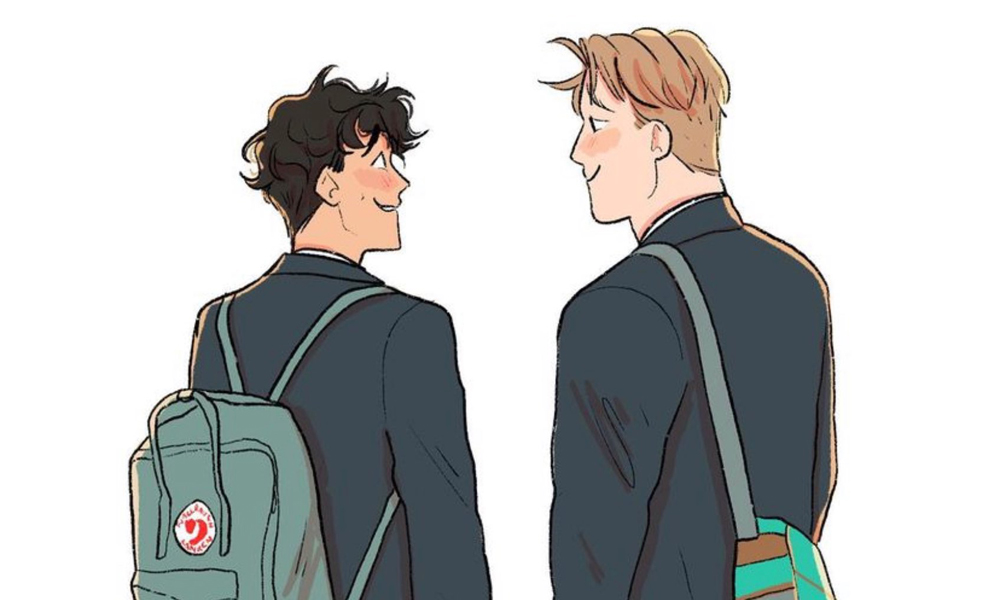 Here’s What Order To Read The Heartstopper Books And Novellas

While you eagerly await Season 2 of this hit series, here’s our guide to the Heartstopper graphic novels and novellas…

Netflix’s adaptation of the queer coming-of-age series launched on April 22 with eight 30-minute episodes, all based on Oseman’s beloved Tumblr web-comic-turned-graphic-novels. The show became an instant sensation around the world, ranking on the streaming platform’s top 10 list in an impressive 54 countries and becoming one of the few series to score the coveted and incredibly rare 100 per cent score on Rotten Tomatoes, with critics universally praising the show. Then, in a testament to the supremely joyful story checking all the boxes as a Netflix success story, the streamer made the rare move ­less than a month after it debuted – of renewing Heartstopper for not one but two seasons.

There’s no official word yet on a release date for the second (or third) season, but if you’re looking to take your Heartstopper obsession to the next level or are looking for a little preview of what might be in store, you can dive into the source material.

Oseman initially crowd-funded a limited self-published print run of the online comic in 2018, which reached its target in two hours. This led to Hachette Children’s Group stepping in and acquiring the rights to publish the comic to the masses, with the first official volume of Heartstopper being published in the spring of 2019. There are now four volumes of Heartstopper (as of July 2022), and the fifth and final volume of the series is expected to be released in early 2023. A companion book, titled Heartstopper Yearbook, is scheduled to drop on October 13, 2022. Then there are Oseman’s novellas, some of which feature the beloved Heartstopper characters.

Ready to get reading? Here’s our suggested reading order to get you into the swing of things.

Netflix’s adaptation of Heartstopper is based on volumes one and two of Oseman’s bestselling graphic novel series, and this is where it all began. As the description reads, “Charlie and Nick are at the same school, but they’ve never met…until one day when they’re made to sit together. They quickly become friends, and soon Charlie is falling hard for Nick, even though he doesn’t think he has a chance. But love works in surprising ways, and Nick is more interested in Charlie than either of them realized.” While there are some differences, the first volume essentially covers off the first three episodes of the Netflix series, ending after Nick and Charlie kiss at Harry’s birthday party.

Volume two picks up immediately after the kiss and continues with a classic case of misunderstood feelings and with Nick discovering more about himself. As the description reads, “Nick and Charlie are best friends, but one spontaneous kiss has changed everything. In the aftermath, Charlie thinks that he’s made a horrible mistake and ruined his friendship with Nick, but Nick is more confused than ever. Love works in surprising ways, and Nick comes to see the world from a new perspective.” The graphic novel covers off episodes 4 through 9 of the Netflix series and ends pretty much the same way the Netflix series ends, with Nick coming out as bisexual to his mother.

Volume three kicks off the not-yet-Netflix-adapted part of Nick and Charlie’s story; we get to see the couple establish their relationship as boyfriends during the Year 10/11 school trip to Paris. We also see Charlie tell his family about Nick, meet David (Nick’s older brother) and begin to really explore Charlie’s anxiety and self-image issues, and the ways in which these negatively impact his relationship with eating. The description reads, “Coming out isn’t something that happens just once, and Nick and Charlie try to figure out when to tell their friends that they’re dating. Not being out to their classmates gets even harder during a school trip to Paris. As Nick and Charlie’s feelings get more serious, they’ll need each other more than ever.”

In the penultimate book in the series, Charlie and Nick face a new school year together, and new struggles. Per the description, “Charlie and Nick’s relationship has been going really well, and Charlie thinks he’s ready to say those three little words: I love you. Nick feels the same way, but he’s got a lot on his mind – especially the thought of coming out to his dad and the fact that Charlie might have an eating disorder.” This book in particular was praised for the way it handles Charlie’s mental health and eating disorder. It ends on a high note, and fans of the series are already desperate to see the hilarious and heartwarming “I love you” scene on the screen.

Solitaire, Oseman’s debut novel (she wrote it at age 17!), features some of the same characters as Heartstopper and operates within a similar timeline, but they are very different stories. Heartstopper is a happy, romantic, uplifting graphic novel series that focuses on Nick and Charlie, while Solitaire is a dark story about mental illness that follows Tori Spring, Charlie’s older sister. It was published in 2014, long before Heartstopper was. It is technically the first to introduce the characters of Nick and Charlie (who appear periodically throughout the novel), but chronologically, it starts a year after Heartstopper Volume 1, while Charlie is struggling with his eating disorder. Solitaire follows the story of pessimistic teenager Tori, who meets Michael, her polar opposite: an unbelievable optimist. They attempt to find out who is behind the pranks at their school, which get more serious as the novel progresses.

Nick and Charlie (2015) and This Winter (2015) are spin-off novellas from Solitaire and Heartstopper, but both can still be enjoyed even if you haven’t read those books. (Both were published by Harper Collins Children’s Books.) Nick and Charlie offers up a little pre-uni drama and catches up with the couple more than two years into their relationship. The novella takes place as Nick is getting ready to graduate Year 13 and preparing to head off to university. Charlie, who is a year younger, struggles with the thought of being left behind.

This Winter offers up a little Christmas cuteness. The novella deals mostly with Charlie’s eating disorder and how his family is coping with it. It is divided into three sections: one for each Spring sibling (Tori and Charlie have a younger brother, seven-year-old Oliver, who is not featured in the Netflix series). Charlie’s section is, naturally, more focused on his relationship with Nick.

Check out Radio Silence, a novel that follows the story of Aled Last from the Heartstopper graphic novels. If you haven’t read those novels, you may be a little confused about where the character of Aled comes from. Aled is one of the only characters from the graphic novels who does not appear in the Heartstopper Netflix adaptation. Back in January 2021, Oseman shared on Twitter that this omission had to do with his significant storyline in Radio Silence. “I decided not to include Aled in the TV series. I know this will disappoint some of you, and I’m so sorry for that, but I did not feel I could give Aled a truly satisfying, complex storyline in the show while having to totally ignore the events of Radio Silence…To include Aled in the Heartstopper show and give him a satisfying storyline would almost certainly involve having to change and/or ignore major elements of the story of Radio Silence, which is not what I or any of you want, I hope!” This presents Netflix with the opportunity to adapt Radio Silence, a novel in which Aled is one of the main protagonists, and his identity and relationships are explored.

Next you could check out Oseman’s third YA novel, I Was Born for This (2018), which takes place two years after the conclusion of the events in Radio Silence. Finally, Loveless (2020) is a YA novel based on the life experiences of the author, who uses she/they pronouns and identifies as aromantic and asexual, and her own experiences in university.