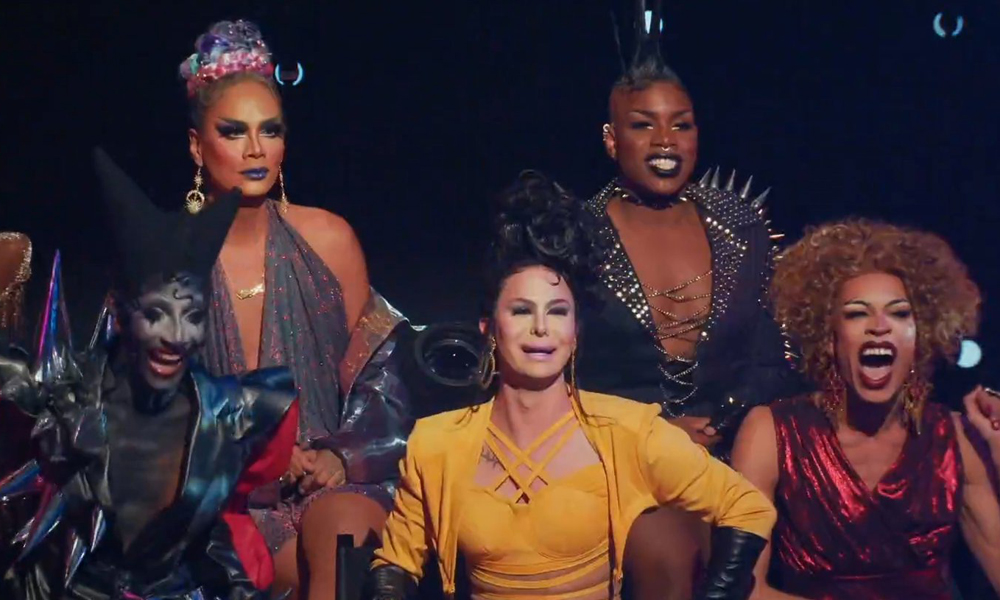 The queens make an oath to tell the whole tea, and nothing but the tea in a courtroom improv challenge…

Last week our All Star queens threw a game show hostess themed ball. It was Trinity the Tuck and Jaida Essence Hall who came out on top after the triple-lewk ball, and Jaida was awarded top queen of the week. She decided to use the platinum plunger to block Jinkx Monsoon from winning a pin during this week’s challenge. This week the queens will be flexing their improv skills with an over dramatic fairytale-themed courtroom show. Let’s get into it.

This week’s episode begins in the werk room following Jinkx’s blocking. The queens gather on the sofa and congratulate Jaida on her win. Jaida says it feels really good to get the validation. Jaida asks Trinity how it feels to finally get a star. Jinkx enters the werk room with the plunger. JInkx has no ill feelings towards Jaida, and continues on with the fictitious “plunger secret” Shea concocted last week, which makes some of the other queens sweat. The Vivienne is feeling the heat to get a star and promises to “bring it” during the next challenge. 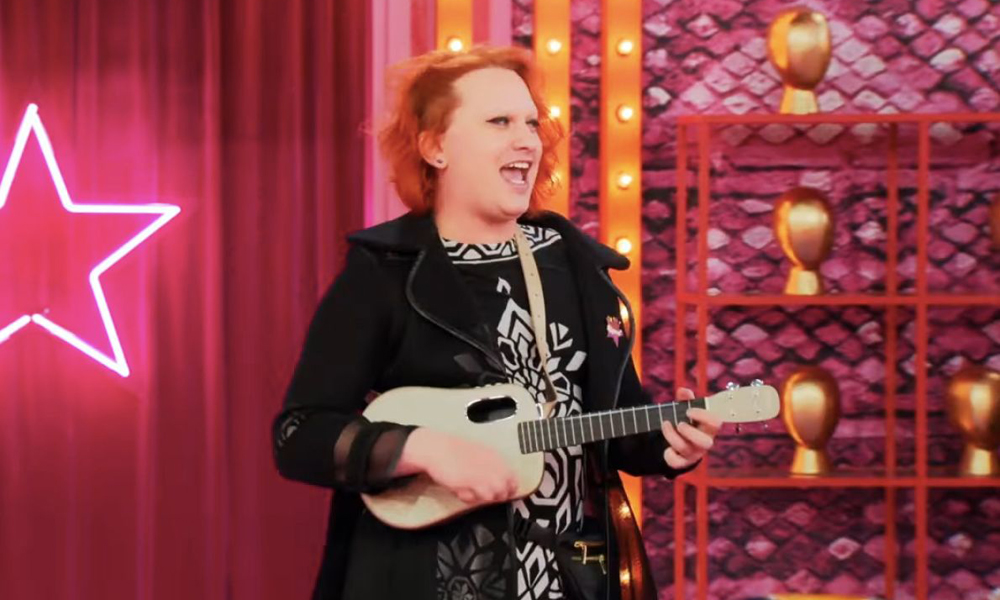 The next day in the werk room Jinkx is leading the queens on a UK Hun singalong. Around the table, Jaida calls Monét out for being the only pinned queen that hasn’t been blocked yet. Ru interrupts the queens to let them know what this week’s maxi challenge is. The queens will need to improv their way through the enchanted TV court show with Judge Michelle Visage. They will be split into two teams to act out infamous fairy tale stories of injustice. Since Trinity and Jaida were the top queens of the last challenge they will be team captains and pick their teams. Jaida chooses Jinkx, Monét, and Yvie while Trinity chooses Shea, The Vivienne, and Raja (who was picked last). Team Jaida will be arguing the “Blow the House Down Boots” case (Three Little Piggies) and Team Trinity will be taking on the “She Did Already Done Has Hers’s” case (Goldilocks).

The teams break and get to work picking their characters and planning out what they want. Team Jaida get their characters down quickly and think they’ll be able to work together well to riff off of each other in the courtroom. Team Trinity also chooses their characters quickly, and Viv is feeling excited to get the big part since she didn’t have an improv challenge on the UK season. The queens make their way to the courtroom and team Jaida is up first. Jinkx and Yvie open the group with strong performances. The whole team really works well with bouncing off of each other and their performance is funny with a big finish. Team Trinity is up next, and Shea The Vivienne give strong performances, and Raja as Goldilock’s grandmother was perfect, Trinity’s evil witch is hilarious but The Vivienne’s portrayal of Goldilocks really rolled with the punches. Everyone had a solid performance, so this will be another hard one to judge. 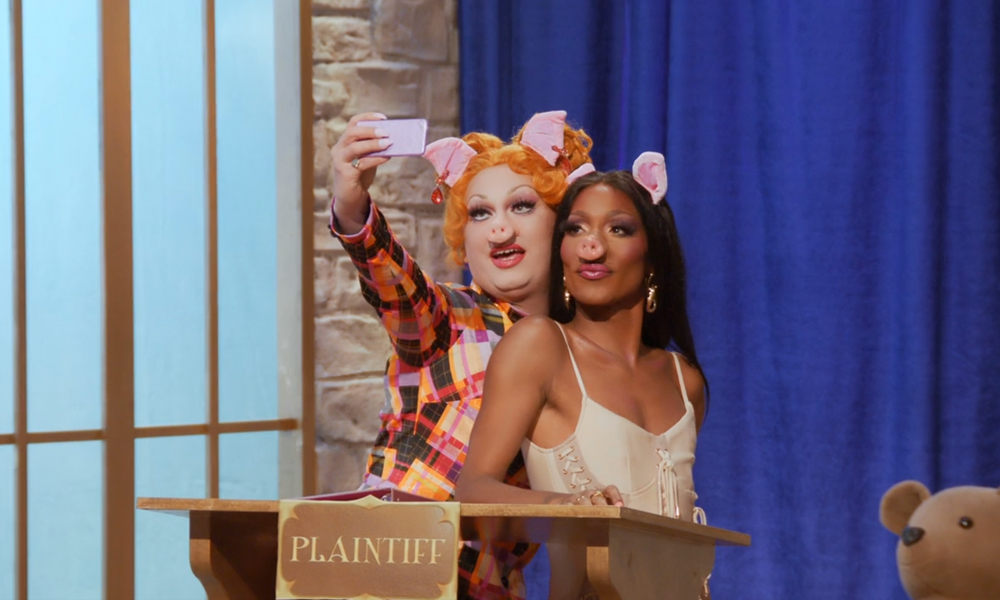 It’s elimination day in the werk room and the queens are feeling good about their performances in the improv challenge. Jaida does a Tajín shot as an energy boost which she shares with Shea. And the queens talk about who they think will be blocked this week. Out on the runway Ru introduces this week’s panel of judges Michelle, Ross Matthews, and Jeffrey Bowyer-Chapman. This week the category is “Spikes on the Runway ” and all of the queens strut in their sharpest lewks. After the runway it’s time for the judge’s critique starting with Jaida. Michelle tells her she did a really good job in the challenge, and Jeffrey loves her look on the runway. The judges tell Jinkx she is incredible at improv and say her and Jaida together were spectacular togethe. Michelle loves that she still did spikes on the runway while staying true to herself. The judges tell Monét she knows how to make an entrance. Michelle says her performance was fantastic, and Jeffrey loves her punk runway look. The judges love how Yvie transformed her body for the runway, and Michelle commends her on how far she took her big bad wolf character. Ross loves Trinity’s interpretation of spikes on the runway and all of the judges agree it was so much fun to watch her during the challenge. The judges love how ridiculous she looked on the runway and Ross tells her she was consistently funny with one of the hardest “Karen” characters to play. The judges tell the Vivienne that her runway look is one of their favourite looks (Ru calls it iconic). Michelle tells her that her performance was brilliant as Goldilocks. Finally, Jeffrey tells Raja her outfit was delectable, and Ross loves how well she sold her character. Ru tells her she’s enjoying watching the rebirth of Raja. 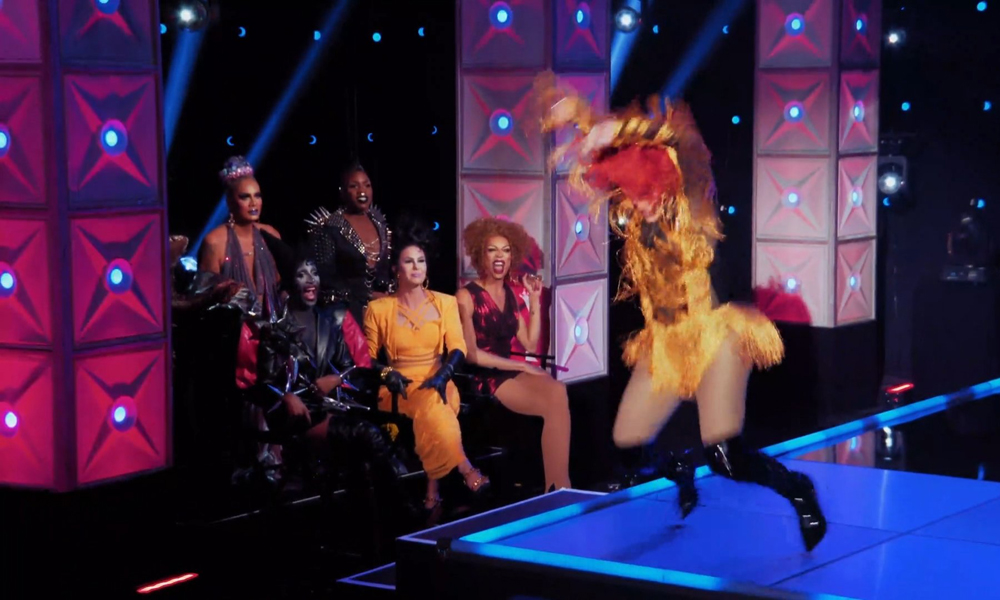 Following the judge’s deliberations Ru announces that the top two queens of the week are Jinkx Monsoon and The Vivienne. Since Jinkx was blocked last week she won’t receive a star pin, but this will be The VIvienne’s first pin of the competition. Jinkx and The Vivienne lip sync for the plunger to Love Will Save The Day by Whitney Houston. Both queens give a strong performance and Ru decides that The Vivienne is the top queen of the week. The Vivienne uses the platinum plunger to block Monét who now won’t be able to earn another star pin next week.

On the next episode of All Stars: The queens deliver hilarious graduation speeches and the competition heats up.