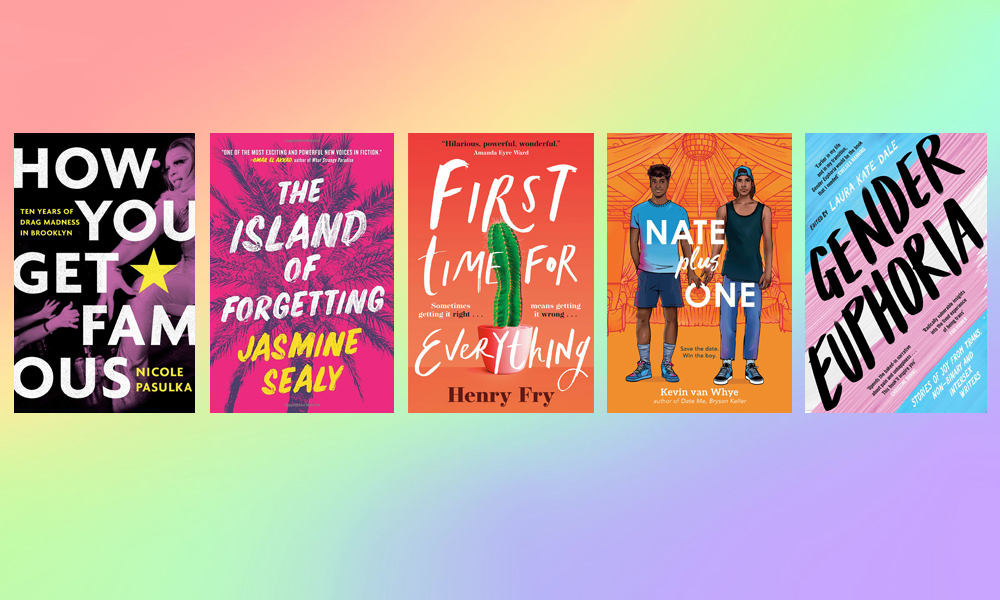 There’s a little something for every reader…

It’s a new season, which means one thing to me: brand new books. Well, that and longer days, warmer weather, picnics with my toddler, and patio dates. But really, I’m mostly thinking about all the new books. If you’re looking for your next read to take with you to the beach or on vacation, we’ve got you covered. Here are five new books, including a fun new rom-com, a compelling history of drag, and an epic multigenerational family drama. Enjoy!

How You Get Famous: Ten Years of Drag Madness in Brooklyn
By Nicole Pasulka
In this debut book by American journalist, Nicole Pasulka takes a deep dive into the underworld of drag in Brooklyn and uncovers all the intrigue, glamour, and triumphs. Take a tour through the history of drag since 2001, learning all the ins and outs and come away both educated and entertained.
Buy it here: Amazon | Indigo

Island of Forgetting
By Jasmine Sealy
Starting in Barbados in the sixties and moving forward through four generations, this engrossing new novel tells the story of a family that runs a beachfront hotel. Without giving away any spoilers, it features enough tragedy to make you feel all the feelings, enough drama to keep you turning the pages, and enough complexity that it will teach you a thing or two about love, race, and sexuality.
Buy it here: Amazon | Indigo

First Time for Everything
By Henry Fry
When Danny Scudd is kicked out of his flat by his roommates because they want to start a family, and he discovers his partner was unfaithful, his life is turned upside down. With nowhere else to go, he moves in with his non-binary/artist childhood best friend, Jacob. There, he gets to know Jacob’s eccentric group of friends that live in a “commune,” and he finds himself navigating the queer dating world, new work, and lots and lots of therapy, as he goes on a journey of self-discovery.
Buy it here: Amazon | Indigo

Nate Plus One
By Kevin van Whyme
This fun summer novel is one of those YA novels that can be enjoyed by adults too. It tells the story of two best friends: Nate, who needs a plus one to his cousin’s destination wedding in South Africa; and Jai, who needs someone to replace the lead singer in his band, who quit right before a big gig. They agree to a bargain: Nate will sing in Jai’s band if Jai (who he has a secret crush on, I might add) will be his plus-one at the wedding. Cue, the romance.
Buy it here: Amazon | Indigo

Gender Euphoria
By Laura Kate Dale
This anthology of personal reflections turns the often-discussed idea of gender dysphoria on its head, instead exploring the feeling of gender euphoria that is experienced when one comes out as non-cisgender and embraces their true identity. It includes moving reflections by 19 people, including trans, non-binary, agender, gender-fluid and intersex writers.
Buy it here: Amazon | Indigo