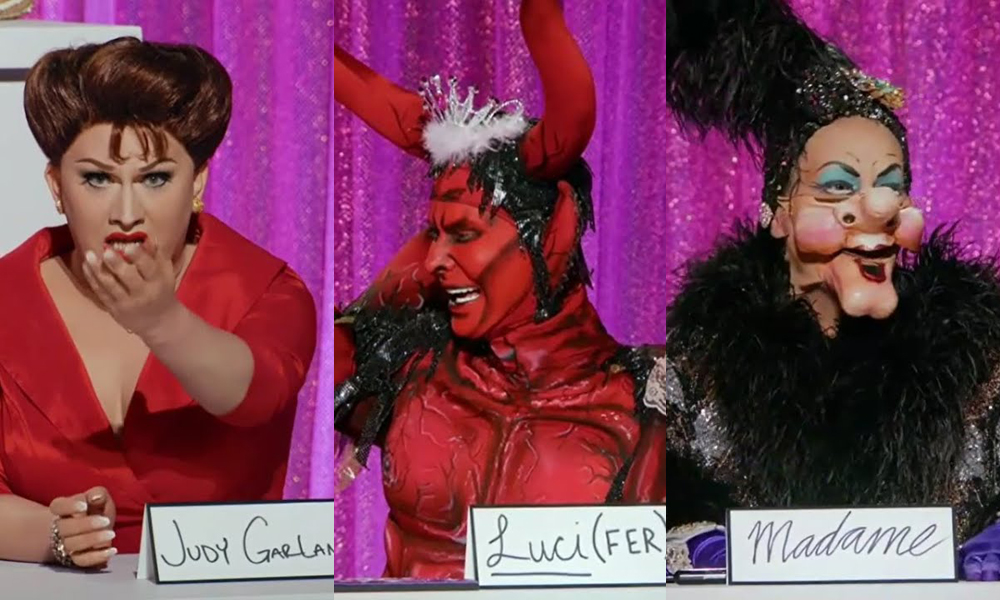 During the premiere episode we learned that the rules for this season of All Stars are a little different from what we’re used to. This season nobody is going home. Instead, the queens are competing for the top spot and an enamel pin with every challenge. Before the finale, the four queens who have the most pins will be competing for the crown in the Lip Sync LaLaPaRuza. The winner of the first challenge was Shea Coulee, and she made the decision to block Trinity the Tuck from winning a pin during this week’s challenge, which is none other than the iconic Snatch Game. Let’s get into it.

This episode begins in the werk room following the blocking after the lip sync. The queens enter, and Shea is feeling so correct about winning the first challenge, and setting the bar for the rest of the season. Over on the couches the other queens congratulate her on her win. Shea asks the other queens if she’s a bad friend for blocking Trinity. Trinity enters the room with her golden plunger and Shea explains why she chose to block her. The reasoning being that she knew Trinity was a threat, and also that she could bounce back from this the fastest out of anyone. Trinity accepts this as a compliment, and vows to make an epic comeback.

It’s the next day in the werk room and Monét and Shea are both wearing their new Legendary Legend star pins. In confessionals Monét is feeling great about still winning the star without having to block anyone. The rest of the queens ask Shea and Monét how it feels to have a target on their back. Jinkx says it would make sense to block a queen who already has a star to slow them down, and Shea vows to remain in the top two so that can’t happen. Ru enters the werk room and reveals that for this week’s maxi challenge, the queens will be competing in the iconic Snatch Game. This season Ru is asking the queens to double down and impersonate not one but TWO celebrities during the game and girl, it better be good after last season’s disappointing Snatch Game. The queens quickly get to work on their characters. The stakes are high for this because most of these queens have won Snatch Game previously, but some of the queens (Monét and Yvie) are nervous going against Snatch Game legends.

It’s time to play Snatch Game, and judging by what the queens had been preparing in the werk room, this game might just be iconic. Michelle and Ross are this game’s contestants. For the first lineup we have Monét as Mike Tyson, Raja as Madame, The Vivenne as Joanna Lumley, Trinity as Satan,Jinkx as Natasha Lyonne, Yvie as Rico Nasty, Shea as social media comedian Elsa Majimbo, and finally Jaida as Prince. Pretty much all of the queens are giving strong performances and getting a lot of laughs, and surprisingly a lot of matches. 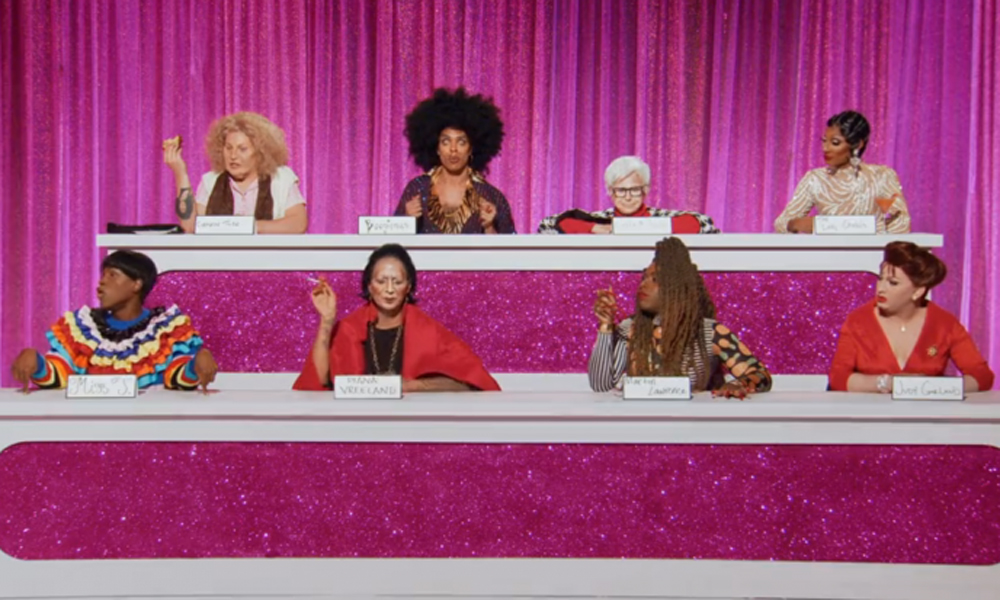 For round two The Vivienne is playing Catherine Tate, Yvie as the Boogieman, Trinity as Leslie Jordan, Jaida as The Lady Chablis, Shea as Miss J of ANTM fame, Raja as Diana Vreeland, Monét as Martin Lawrence, and Jinkx as Judy Garland. The queens really brought it for this round. Jinkx even treated us to a mid-show song. This Snatch game was seriously so good, I forgot I was supposed to be recapping it halfway through because I was laughing so hard. A real treat after last season’s debacle.

It’s runway day in the werk room and the queens are all feeling pretty good about their performances in the Snatch Game. The queens compliment Jinkx on her iconic Judy Garland, and Raja on her solid performance. Jinkx tells Monét that if she wins she will be blocking someone with a star to slow them down from winning too many pins. Out on the runway Ru introduces this week’s judging panel Michelle, Ross, and this week’s extra special guest fashion icon Daphne Guiness.

This week the category is “Pleather Principle”, and the queens take turns walking in showstopping pleather looks. Following the runway we get right into critiques starting with Ru complimenting all of the queens on a hilarious Snatch Game. The critiques start with Monét, and they loved her Mike Tyson impression, as well as her pleather gown. The judges say Yvie’s Rico Nasty was a bit one-note, but she hit her Boogeyman out of the park, and loved her runway. The judges tell Raja she smashed Snatch Game, and Ru loves her runway look. Michelle and Ross loved both of Trinity’s Snatch Game characters. Ross tells the Vivenne she is an incredible impressionist, and that her runway look is fantastic. Michelle tells Jinkx she is blown away by Judy, as well as her Natasha Lyonne. Ross tells her it was a master class in Snatch Game, and the judges love her runway. The judges say Jaida’s Lady Chablis was spot on, but they didn’t get enough Jaida from it. Michelle says her Prince impersonation was terrible but it was so funny that it kind of worked. Finally, Michelle tells Shea that her Miss J was stronger (Ross disagreed), but everyone could agree that her catwoman runway was everything.

After the judges deliberate, Ru announces that the top two of the week are JInkx and Trinity. Jinkx has earned a star pin, but Trinity could still win the lip sync and block another queen. Jinkx and Trinity lip sync to Rumor Has It by Adele. Both queens give equally passionate and ridiculous performances, and Ru names Jinkx Monsoon as the winner of the week. Jinkx makes good on her promise and blocks Shea from winning a star next week. Shea now holds the golden plunger.

Next week on All Stars: Shea throws a plunger curveball, and Ru throws a ball.