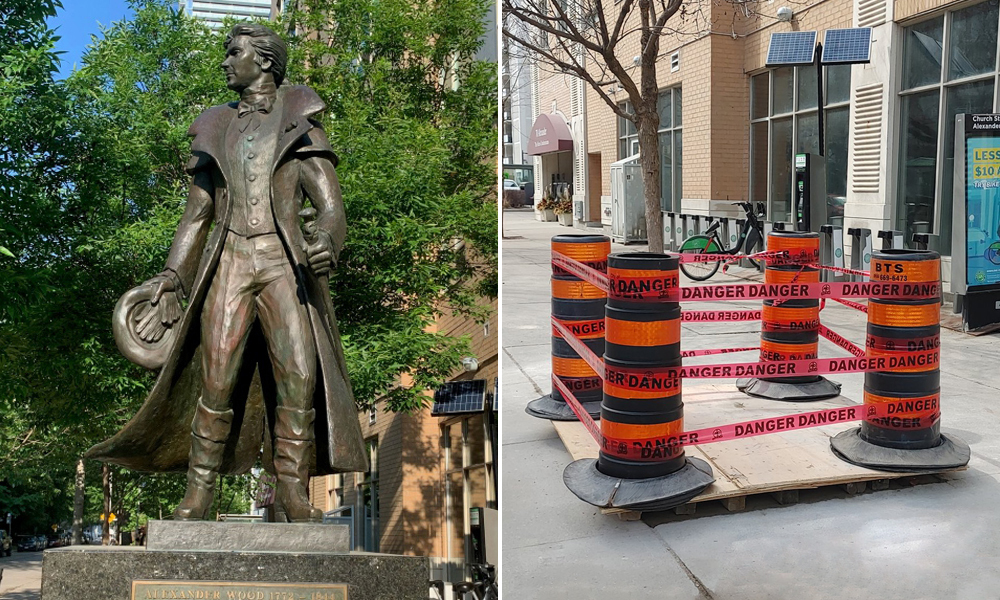 The bronze statue of Alexander Wood that stood at the northwest corner of Church and Alexander streets in the heart of Toronto’s gay village has been destroyed. The statue was erected in 2005 by the City of Toronto and the Church Wellesley Business Improvement Area (BIA) and then last summer became the subject of controversy. In the summer of 2021 calls to remove the statue from the village began to get louder over allegations that potentially tied the man who helped found the Church-Wellesley Village to Canada’s residential school system.

Wood was a 19th century gay Scottish merchant, who emigrated to Upper Canada at the age of 21 in 1793. Within seven years, he had become one of the most successful merchants in York (which eventually would grow into Toronto), and by the time he died in 1844, he was considered one of Toronto’s most respected citizens. That’s despite the fact that Wood found himself at the centre of a scandal when he investigated a rape case in 1810.

Wood was one of the few gay figures to play a leading role in Toronto’s history so in 2005 the BIA had championed his statue’s installation, sharing installation costs with the City of Toronto. Wood was immortalized wearing a long coat and holding a top hat and gloves in one hand and a walking stick in the other.

However, in July 2021, the BIA called for the removal of the statue citing Wood’s connection to residential schools drawing parallels to the ongoing controversies over the legacy of Egerton Ryerson and the statue that stood at Ryerson University, also referred to as X University pending the announcement of a new permanent name. That statue was pulled down in June 2021 by demonstrators.

“We found out information about the individual the statue is of and the information wasn’t very good,” said BIA chair, Christopher Hudspeth, in an interview with Global News last summer about the statue of Wood. “It showed his connection to an organization which had direct setting up of schools, which eventually became the residential schools in Canada.”

In a public statement issued on June 8th, 2021, the BIA laid out its case for the removal of the statue – backed up in part by information from the Toronto Public Library Archives which it says is “easily accessible” – by pointing out that Alexander Wood was a “founding board member and for many years, the treasurer of the Society for Converting and Civilizing the Indians and Propagating the Gospel Among Destitute Setters in Upper Canada.”

“The Society’s actions resulted in the St. John’s Missionary to the Ojibway 1832, which in 1873 became Shingwauk Industrial Home, a large two-story wooden structure in Sault Ste. Marie, later the Shingwauk Residential School” the statement went on to say. “These are early examples of the residential school system whose purpose was to stop Indigenous people from hunting and gathering, forcing them to take on more European condition. These actions contributed to the cultural genocide of Indigenous people in Canada.”

However, Wood’s history is complicated and nuanced and not everyone was on board with his statue being removed.

A National Post opinion piece from June 2021 by writer (and IN Magazine contributor) Adam Zivo asserted that, “Calls to remove the statue of Alexander Wood from Toronto’s gay village over allegations that aim to tie him to Canada’s residential school system are misplaced and distort history.”

Zivo then stated that “Wood, a 19th century gay Scottish merchant, is intimately tied to the history of Toronto and its LGBTQ community and still deserves to be commemorated” before providing deeper context and outlining a historical narrative attributed to online resources published by the Shingwauk Residential Schools Centre, “an educational project produced in partnership with the Children of Shingwauk Alumni Association (an organization composed of survivors from the Shingwauk residential school).”

But BIA chair Hudspeth said that the change of heart wasn’t an effort to erase history.

“…We do not want the history of this to go away. What we want to go away is the symbol of this, and removing the symbol would be good.”

Removed it has been. On April 4, 2021 the Alexander Wood statue at the northwest corner of Church and Alexander streets was destroyed and removed by the city.