Skip to Content
Home / Latest / Did You Know A Canadian Fashion Designer Created All Of Ross Mathews’ Looks On RuPaul’s Drag Race Season 14?

“The hilarious Ross Mathews” has served as a regular judge on RuPaul’s Drag Race since Season 7, bringing his bubbly, whip-smart commentary and love to VH1’s Emmy-winning reality show, and Season 14 was no different…except for one thing. This season, Mathews and his larger-than-life personality also served up some serious sparkle with each of his appearances, thanks to Canadian fashion designer Ross Mayer and his unisex fashion label, Mayer.

Mayer was responsible for all of Mathews’ sparkling, often varsity-inspired sequin looks throughout the season, all of which will now be available to fashion lovers around the globe as part of Mayers’ “The Born to Sparkle” capsule collection.

The style journey between the two Rosses began back in February 2020, shortly before the pandemic hit, when Mathews was in Toronto promoting his latest book Name Drop (which is filled with some of his juiciest off-camera Hollywood stories, btw). While performing at the Toronto date of his “Name Drop Tour,” Mathews (who previously wrote Man Up!) spotted one of Mayer’s signature sequin bombers in the audience, which was worn by Mayer co-owner Alexander Sinardo – and it was love at first sight.

“Mathews instantly fell in love with the piece, and it was only days later his own jacket was shipped to him on one of his tour stops,” Mayer told IN.

In early 2021, Mathews reached out to Mayer and asked if he could create something unique that Mathews could wear on the upcoming season of RuPaul’s Drag Race. Mathews was seeking a new look for himself, one that felt casually effortless but with a big impact. As Mathews joked, “Sequins are a Drag Race neutral.”

During the design process, Mayer and Mathews worked together to create a series of stage-worthy looks that would be featured throughout Season 14 of the show.

“What I loved about this opportunity was that Mathews was open to new style possibilities,” Mayer told IN. “The one thing I distinctly recall was him asking me to create a fresh new look for him that veered away from all his other seasons’ past looks.”

Using unorthodox fabrics to elevate the looks, the design collaboration took the direction of core streetwear staples and ended up with resulted in a glam luxe meets street style. It consists of athletic-inspired sequin sweatshirts and flashy bomber jackets, and perfectly aligns with the brand’s genderless market.

“This challenge was right up my alley, taking street-style looks like sweatshirts and bombers, and putting them in sequins and metallics that were RuPaul-show-worthy,” said Mayer. “The process unfolded with us meeting up online and sharing style, fabric and inspirations that were a true melding of brand personas.” 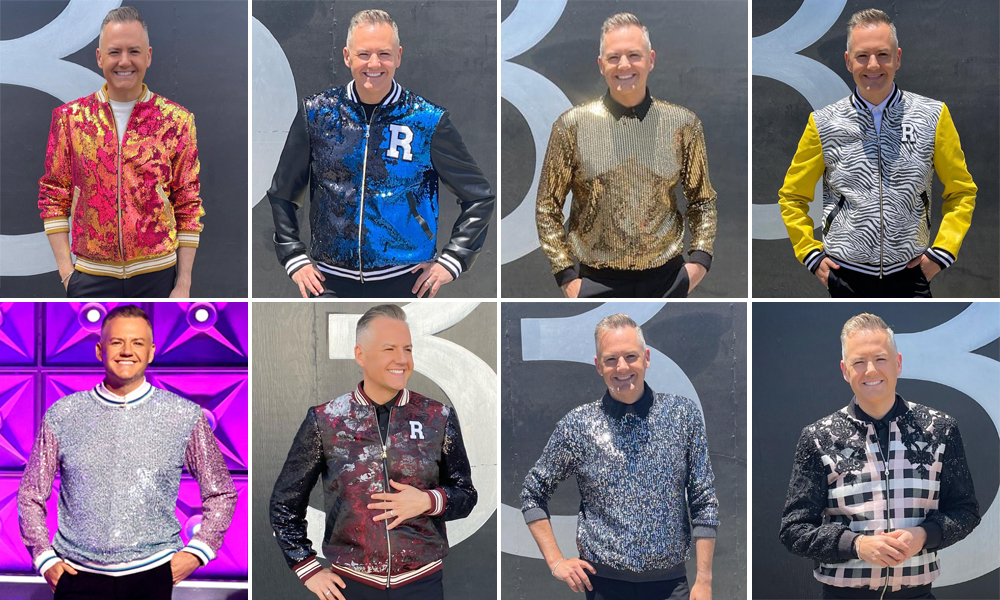 Above: The eight different Mayer looks that Ross Mathews wore throughout season 14 of RuPaul’s Drag Race

Each is a winning look. But which one of the pieces is Mayer’s favourite?

“All the pieces are so special to me, but I would have to say the Check & Lace Bomber is one of my faves,” Mayer told us. “I love how this style combines casual and dressy vibes together – but then again, that’s what the whole collection is about.”

Every look Mathews wore throughout the season from Mayers’ sparkling “The Born to Sparkle” capsule collection is now for sale on mayerofficial.com. Prices range from $245–$725, with partial proceeds going to Rainbow Railroad, a Canadian charitable organization created to save lives of LGBTQI+ people globally.