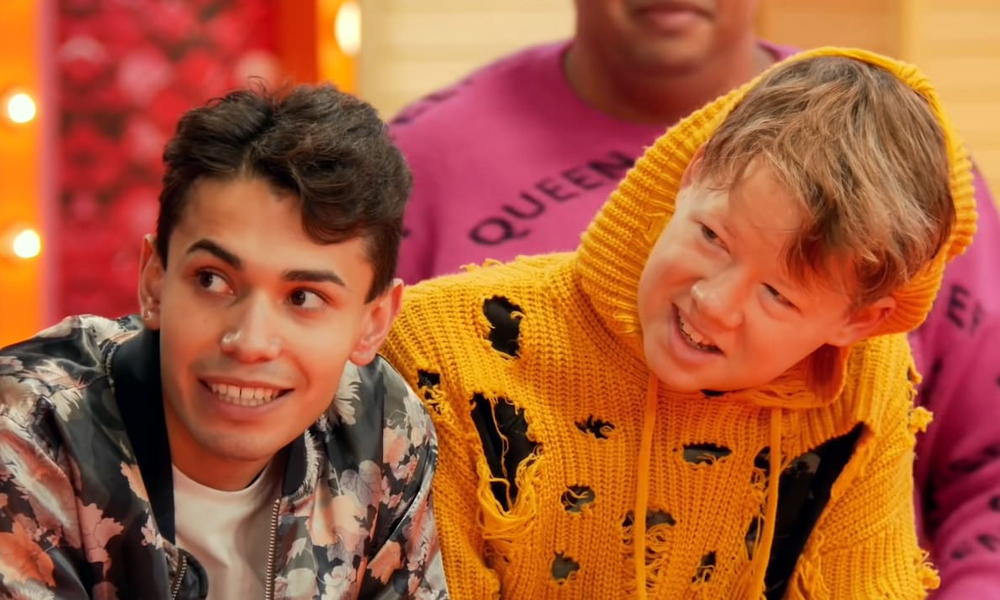 The remaining queens break a leg (and wind) with a soap opera acting challenge. Ts Madison is a guest judge…

Last week after a sewing challenge, and a surprising win from Jorgeous, we said goodbye to the resident straight queen Maddy Morphosis after she gave us absolutely nothing in the lip sync against Jasmine Kennedy. We also saw Daya Betty get increasingly more irritated with her perpetually safe status, and constant comparison to her drag sister Crystal Methyd. Will it all come to a boil tonight? Let’s find out!

This week’s episode beings in the werk room following Maddy’s elimination. Jasmine says she is very happy to send Maddy home. We get a short recap of the fight they had in Untucked. Over on the couches, Lady Camden says she is bummed to have been in second place again but congratulates Jorgeous for her win. Daya Betty goes off about how she thinks Jorgeous didn’t deserve to win since SHE put more work into her Crystal Methyd cosplay. While they de-drag Jorgeous, Deja, and Jasmine talk about how Deja spoiled her win.

The next day in the werk room the queens enter feeling fresh and ready for a new challenge. While the queens are standing around the table, Daya apologizes to Jorgeous about the night before, but Jasmine can see through the fake sounding apology. Ru appears and announces that we are nearly halfway through the race officially. Ru tells the queens for this week’s maxi challenge the queens will be starring in their own soap opera. Jorgeous is in charge of assigning the roles since she won last week’s maxi, and Daya is SWEATING. The queens get cozy on the couch to assign the roles. The roles are divided, and the queens get to work rehearsing with their scene partners. Daya and Willow are playing spring break sisters, and Kerri, Deja and Jorgeous are getting dramatic with their scene, and Jorgeous really needs to impress because she didn’t do so well in the last two acting challenges.

The queens are ready to shoot The Daytona Wind with their Director Ru. Deja, Jorgeous, and Kerri are up first. Ru first direction is for Deja to have a southern accent, which aren’t really common in Florida but… choices, I guess. Kerri and Jorgeous do well. Jasmine kills it with her character, and Willow impresses Ru from the jump. Bosco and Lady Camden are overdramatic in the best way possible, but Angeria is struggling with her lines a little. Overall, this is a pretty strong acting challenge, so I’m excited to see the outcome.

It’s the next day in the werk room, and it’s elimination day! The queens get ready for the runway and Daya further apologizes to Jorgeous. The queens talk about San Francisco’s Folsom Street Fair ahead of the chaps themed runway, and Jasmine and Daya throw a little shade at each other. Out on the main stage Ru introduces the judging panel Michelle, Ross, and this week’s extra special guest comedienne Ts Madison. The evening starts with the chap party, and the queens make their way down the runway in looks that have no business being so good. Keeping with the season’s Wonka theme, Lady Camden does a Willy Wonka fake out with a trip and fall that had us all gagged when we all realized it was part of her presentation. The queens line up to watch The Daytona Winds, and we get our second gag of the night because there are about 600 farts dubbed into the soap opera and the title of the show suddenly makes so much sense. The show was good, farts included. This will be a hard one to judge for sure.

Based on the performance and the runway Ru announces Deja, Kerri, and Angeria are all safe for the week. The remaining queens represent the tops of the week. Ru tells the queens that this week there are no bottoms, so the top two queens will lip sync for the win. The critiques start with Jorgeous and it starts with the fact that she’s not really wearing chaps, but she looks stunning and she did well in the challenge. The judges love Jasmine’s graduation chaps look and her ridiculous performance. Ross loved Lady Camden’s epic reveal on the runway, and all of the judges praise her acting. Ross tells Daya she nailed it in the challenge, and Michelle says she delivered, and she loves the runway look. Michelle tells Willow her performance was a little too close to Moira Rose (I didn’t personally see it) but the other judges disagree, and Ross loves her runway. Ross tells Bosco she nailed the hardest role in the challenge, and her pink leather chap look is to die for.

Following the deliberations Ru announces Jorgeous, Jasmine, Bosco, and Willow are all safe for the week. Ru says Daya Betty and Lady Camden are the top two queens of the week, and lip sync to “One Way or Another” by Blondie to win a cash tip of five thousand dollars. Their energies are pretty well matched, and both of them give it their absolute all. After the lip sync Ru crowns Lady Camden as the winner of the week! Condragulations Lady C! Nobody is getting sent home so let the music play, and fade to black!

Next week on Drag Race: The queens get into their first music challenge, and step back in time to the 60s for their runway. Kerri and Jasmine might have beef, but it also might be the edit.