Season 14 kicks off with the first seven queens competing in a talent competition before the first queen is sent home. Music sensation Lizzo is a guest judge…

Well, ‘tis the damn season! It’s the beginning of the year which means the wonderful folks at Drag Race HQ have us set up for another winter full of drag queens. Once again, this season promises to be unlike anything you’ve ever seen before with enough twists and turns to goop us all. Any long-time fan of the franchise can tell you, there is simply nothing RuPaul Charles could do to surprise us anymore. Hell, I can tell which queen is being eliminated based on the sound effect that plays on each of their closeups prior to the lip sync. But just in case you need a slight refresh on last season because quite frankly it’s felt like it’s been five minutes, but also 48 years ago I’ll give it to you. Season 13 premiered on January 1, 2021 and ran a whopping 4 months until the absolutely sickening Symone was crowned as the winner. Season 13 was largely criticized for just how long it was (a whole season of UK Drag Race happened within the same timeframe), but ultimately gave us a new group of stunning queens to gag over. Speaking of… it’s about time to meet some new queens!

Where else would season 13 start but in the legendary werk room? The first queen to enter is Alyssa Hunter from Puerto Rico. She’s a pageant queen, but she’s also a triple threat. Next in the werk room is Bosco, she’s an alt queen and she’s from Seattle. Arriving next is Kornbread “The Snack” Jeté from LA, and she’s already throwin a little bit of shade. Willow Pill enters and is giving all the Y2K vibes, which the other queens waste no time reading. The stunning Kerri Colby enters next and she’s wearing the trans flag with pride baby! Sickening! Next in is June Jambalaya, and she is ready to sprinkle her designer wardrobe all over the competition. Orion Story from Michigan is the last to enter the room (the first queen from Michigan y’all!), and she’s serving vintage silhouette. Following Orion’s entrance the video alarm sounds, and the queens catch on that this is a split premiere. Ru tells the queens they need to POP THAT PUSSY if they want to survive the competition. 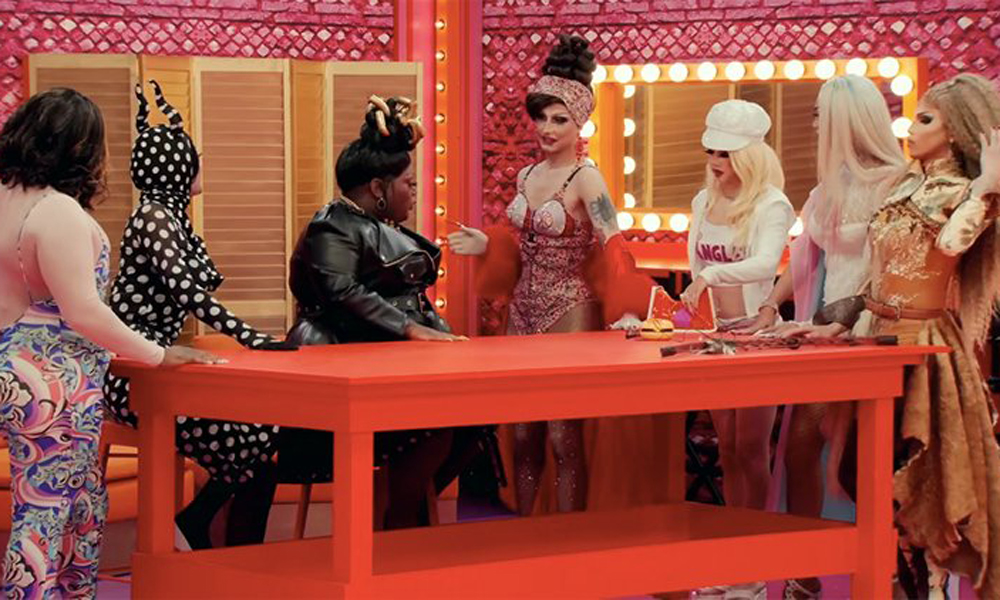 Ru enters the room and tells the queens that although Drag Race is world-wide, nothing hits like the OG series. Ru tells the queens that this is in face a split premiere, but at the end of tonight’s episode one queen will be going home. Ru announces that the first challenge is a freaky photoshoot. In the photoshoot, the queens will need to serve face while spinning on the lip sync smackdown wheel. I’m not going to lie, I got motion sick watching this challenge go down. Following the photoshoot Ru announces that the winner of the mini challenge is the sickening, Kerri Colby! Ru tells the queens that for their first maxi challenge they will be performing at the CNT show (the talent show). As June said, this challenge separates the girls that get it from the girls that DON’T. The queens get out of drag for the first time and talk about their backgrounds, and what they’re going to be doing in the talent show with Ru. Before leaving the queens to get to work, Ru reveals that this week’s extra special guest judge is none other than the QUEEN Lizzo.

The next day in the werk room the queens get ready for their main stage debut. Kornbread and Kerri talk about their religious upbringings, and the RuMail alarm rings again, but this time it’s Lizzo, and she enters the werk room to congratulate the queens and give them a little pep talk before heading out to the stage. Out on the main stage there’s a slight change to the usual RuPaul runway entrance, because now Ru is performing her own song with dancers and everything. Ru introduces this week’s judges panel, her ride-or-die Michelle Visage, the newly engaged Ross Matthews, and the radiant Lizzo. First to present their talent is June Jambalaya who is performing a passionate African dance. Next Bosco performing an alluring burlesque number (that’s fancy stripping y’all!) which Bosco does almost completely. Alyssa Hunter is next performing a rock song, which is totally different from the energy she entered the werk room. The other queens clock her for not playing the guitar. Kerri Colby performs to Nicki Minaj’s “Anaconda,” which turns into a jump rope routine, and it’s unlike anything we’ve seen in a talent show before. I for one love it. Orion is performing a comedy routine; I mean it gets a few laughs but it’s not amazing. Moving on… Kornbread slays with an original song and a performance with props, fully coming for Lizzo’s gig. Willow is next and performs a truly bizarre and chaotic routine, and it kind of served. It had everybody cracking up.

Following the talent show, the category on the runway is “Signature Showstopping Drag”. All the queens look gorgeous in their signature looks, and for the second time this evening Kornbread comes for Lizzo’s gig, in an outfit made of the exact same material Lizzo is currently wearing. The critiques start with June, and the little details weren’t doing it for the judges. Ross loved how whimsical Bosco’s burlesque performance was, and Lizzo says she’s something special. Ross loved that Alyssa did a rock song, but Michelle says it was “one note”. Ru says her rock number didn’t show enough of her true self. The judges loved Kerri’s jump rope routine but wished it had started sooner and wanted her to go all the way. Ross loves that she’s branded herself in her runway look. The judges commend Orion for trying a comedy routine, but it should have been workshopped a bit more because it just wasn’t that funny. The judges liked Kornbread’s energy but say there’s a few things she needs to work through. It’s all in the details baby. Willow’s green runway look makes Michelle’s skin crawl, but the judges all agreed that Willow’s talent performance was genius. So confusing, so different, so much better than a queen coming out to kickstart their music career with an “original song” (in my opinion).

Following the judges’ deliberations Ru announces that Kornbread is the winner of the first maxi challenge. Bosco and Willow Pill are both safe, as well as Kerri Colby and Alyssa Hunter. This leaves Orion Story and June Jambalaya both up for elimination. The bottom queens lip sync for their lives to Lizzo’s “Water Me.” Following the lip sync Ru saves June Jambalaya, and sends Orion Story home, making her the first queen to be eliminated from season 14.

Next week on Drag Race: We meet the second half of the new queens and do it all over again, and Alicia Keys is a guest judge.