The eliminated season two queens are back to join the top four on the main stage for an extra special reunion. After a lip sync battle royale another queen is eliminated ahead of next week’s finale…

Last week we watched at the queens took on the makeover challenge as they created looks for LGBTQ+ teens to wear to prom. While Pythia won Prom Queen of the week, Adriana was sent home. Next week is our grand finale. We’re so close to crowning Canada’s next drag superstar, but first we have to make it through the reunion. If we’re lucky some messy shit is about to go down, including an elimination by the end of the episode (which hardly seems fair, unless the eliminated queens are the ones deciding, then it’s spicy and I’m into it). At the end of this week’s episode, we’ll have a final three. Let’s get into it!

Our reunion episode begins in the werk room following last week’s prom and Adriana’s elimination. The queens read Adriana’s goodbye message and gather on the couch to celebrate being in the top four and congratulate Pythia on FINALLY winning a design challenge. A premature video massage from Ru startles the queens. Ru lets the queens know that they’ve almost reached the finish line, but no queen will be crowned until they are all reunited…womp womp. The queens get out of drag and prepare to meet with the eliminated sisters of season two.

Following the opening credits judge Brad Goreski welcomes us to the main stage to introduce the extra special reunion episode and lets us know that by the end of the night our top four will become a top three. He then welcomes all of the eliminated season two queens back to the stage. All of the queens look stunning in matching pastel looks with the exception of Kimora who is in a gorgeous neon green dress. Brad starts by asking the eliminated queens if they’re surprised with the top four. Some say that they’re not, because the top four are all extremely talented and deserve it. Eve jokingly says it should have been them up there, but they messed it up. Stephanie Prince says she should have been there, and replaced Kendall (this was a joke, or was it?). Brad introduces some of the season’s best looks, like Pythia’s two-headed look, Pythia’s centaur look, Kendall’s show pony, Suki Doll’s 1920s murder mystery look, and Icesis’s leather and chains look. Brad talks to Icesis, and Pythia about their designing, and Kendall’s bodysuits.

Brad moves on to the eliminated queens to ask what they learned from the competition. Beth is sad she didn’t get to show the world how much she’s grown but is so ready to do that moving forward. Océane Aqua-Black joined a gym so she could build her stamina to sing and dance at the same time. Then we watch a compilation of Adriana’s time on the show, and she really did deliver some looks. Adriana says she felt underestimated by the other queens, but she’s proud of what she accomplished on the show. Brad brings up the brat pack (Kendall, Synthia, and Gia). Kendall explains that it was the best getting to experience Drag Race with her best friend. Kimora says she loved seeing their sisterhood, but Beth felt a little left out of the Vancouver sisterhood. 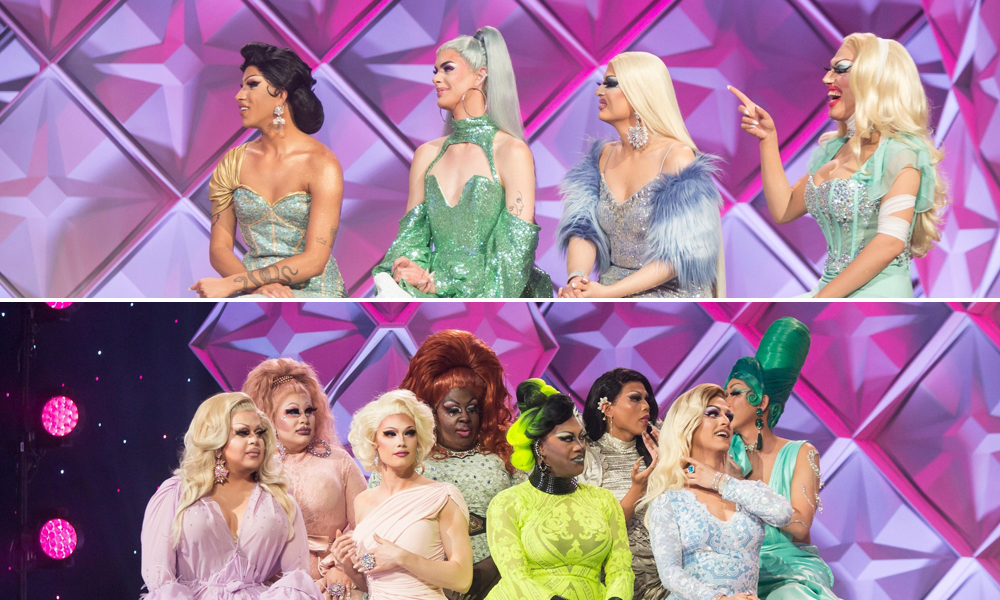 Gia and Eve talk address their “drama”, which to be honest I totally forgot about. Kendall talked about how she excelled at challenges she thought she would be terrible at, and that allowed her to explore other parts of her personality. Everybody makes fun of Gia Metric’s weekly Oscar acceptance speeches, and Pythia reveals how she never landed in the bottom two. The top four queens talk about their AHA moments in the competition when they knew they were going all the way. Since Stephanie Prince was eliminated before the reading challenge, Brad hands her the glasses and proceeds to read the queens.

Brad announces that season two’s Miss Congeniality (voted by the other queens) is…Suki Doll! Suki gives literally the cutest acceptance speech ever, and Brad pivots by asking the eliminated queens who they think will win. Every queen in the top four receives votes, but Icesis and Pythia get the majority. Brad THEN reveals that the top four will soon become a top three. The top four will be competing in a lip sync battle royale, but only three of them will make it to the finale. They will be paired up via pulling matching lipsticks at random. The two winners will automatically advance to the finale, while the losers will lip sync for their lives, and a spot in the final episode. The queens pick their lipsticks, Kendall will be lip syncing against Gia to “Main Event” by RuPaul, and Pythia and Icesis are lip syncing against each other to “Born Naked,” also by RuPaul.

All of our judges return to the main stage Kendall and Gia are up first, and they ARE NOT holding back. These two both want a spot in the finale. Amanda announces that the winner of the first lip sync is Kendall Gender. Kendall automatically advances to the finale, and Gia will have one more shot at the finale. Next, Pythia and Icesis lip sync to Born Naked. This is Pythia’s first lip sync in the entire competition. These two are also giving it their absolute all. The passion is off the charts. Brad advances Icesis to the finale. In the final lip sync, Pythia and Gia lip sync for the final finale spot to RuPaul’s “Call Me Mother.” Both of the losing queens are not done fighting for that spot, they’re pulling out all the tricks. The judges deliberate, and Traci announces that the winner of the final lip sync and moving on to the grand finale is Pythia! This means that Gia Metric is going home just ahead of the finale. She gives a tearful goodbye, and thanks the Academy before heading out. She’s made an impression on the competition she should be proud of.

Final Winner Predictions: Y’all know I’ve been voting for Pythia since week ONE, but it truly could be anybody’s game. Off of track record, it’s Pythia. Off of the whole package, it’s Icesis. But Kendall is the wildcard!

What we’ll see next week: It’s the finale baby! The top three write their own verse to Brooke’s song Queen of the North, Hollywood Jade is back to choreograph, and the next winner of Canada’s Drag Race is announced!