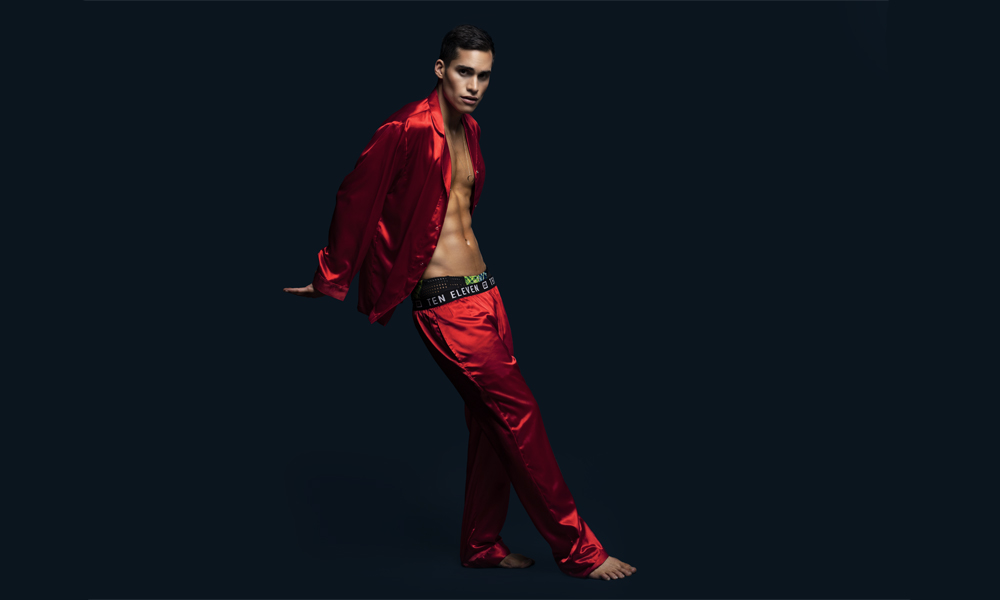 Fashion model Marvin Cortes brings the heat to the holidays…

Marvin Cortes made history as the first male contestant to place as runner-up on cycle 20 of Tyra Banks’ wildly popular reality modelling competition America’s Next Top Model in 2013. He later went on to publish his own book, Don’t Waste Your Looks on Likes.

This past summer, Cortes took to social media to share that he is a proud member of the LGBTQ community. “I want to let you know that I’m coming out as openly bisexual,” said the 28-year-old in a heartfelt, 11-minute video he posted to Instagram TV. “I’ve never been happier, and I look forward to living more of an authentic life and sharing that with you.”

He is inviting all the world to join his journey of newfound sexual freedom in his latest passion project, an OnlyFans page. We spoke with Marvin Cortes at his home in Los Angeles.

Hi, Marvin! How has life been since you came out as bisexual?
It has been unexpectedly positive and filled with love from both my fans and my loved ones. I used to have anxiety about living as an openly bisexual guy, but it has been very relaxing and reassuring to finally be able to live in my true skin.

You have mentioned previously that your family was having a hard time finding acceptance.
They’re making progress. My brothers have been extremely supportive, in their own way, and my parents and I are talking more and more often. I haven’t seen them in person since coming out, but we are able to FaceTime and talk on the phone. We talk mostly about things besides my sexuality, though, which is nice.

Who is having the hardest time?
My uncle has been the most vocal about his unacceptance. It’s odd, because he really hasn’t been a part of my life since childhood. His opinion matters little to me.

What do you want your family and all of your fans to know about bisexuality?
Bisexuality, at least for me, is about recognizing the beauty and the sexy in both male and female. It is rooted in love. The most difficult part of being bisexual is seeing great potential partners on both sides.

Does it upset you that some people still believe bisexuality is simply a road to homosexuality?
Not really. As I’ve gotten older and matured, I’ve come to realize that other people’s opinions don’t affect me so much. At the end of the day, it’s about walking in my own truth and appreciating the person I see in the mirror. When coming out as bi, my biggest concern was that I might lose my ability to connect with women because of the stigma I worried women had about bi men. So far, it hasn’t been the case, which has been a pleasant surprise.

Let’s talk about your OnlyFans page. Does your family know about it?
My brothers know I have an OnlyFans page. They think it’s amazing that I’m able to make money by posting pictures and videos online. As for the rest of the family, I don’t know for sure; I would imagine they all know about it. If they have watched what’s on the page, that would be a different story. (Laughing) I don’t think my family has any interest in seeing the kind of content I post on there!

What exactly happens on the page?
I share a lot of myself. A lot…including the sexual experiences I enjoy in my personal life. Some of my content is amateur and some is professionally produced. I give fans a real unfiltered peek at what my sex life is like, and I think from all the feedback I get, people appreciate it. I don’t hold back in my content because I feel like OnlyFans is the one platform not to hold back on.

What are fans asking you for?
They ask for all types of things, from vanilla to kinkier content. I can’t get too specific because I wouldn’t want a fan to think our relationship isn’t private. Basically, everyone has their own interests on OnlyFans. Different things do it for them. I never judge what someone wants to see from me, though there are some things I prefer to film in my own time to figure out how I want it to be captured.

Does your family need to worry that their boy may be lured into adult film?
I seriously doubt they worry about me at all, so I don’t think so.

Will you see your family for the holidays?
I always look forward to seeing my family during the holidays. I’m excited to spend time with them and enjoy the quality time together.

Have you begun your holiday shopping?
I usually wait to start my shopping until after Thanksgiving. I have so many people to shop for, but my mom tops the lists for being the amazing mother that she is. My dad never wears or uses any of the gifts I get him (laughs).

What is your holiday wish this year?
For the world to get back to some kind of normal. I don’t think I’m alone in that wish. It seems like we’re heading in the right direction.

Will anyone be unwrapping you?
I hope so! I am seeing people, but no one exclusively at the moment. I certainly would like to be unwrapped this holiday, though! Whether it’s by a guy or girl, I’m not really sure yet.

PHIL BESSIMER was born in Seattle, raised in Pennsylvania, and now resides in California. His work has appeared in numerous places in print and online including AXS, Examiner and more. He is a single parent to three cats, and has also worked as an actor, singer and teacher.