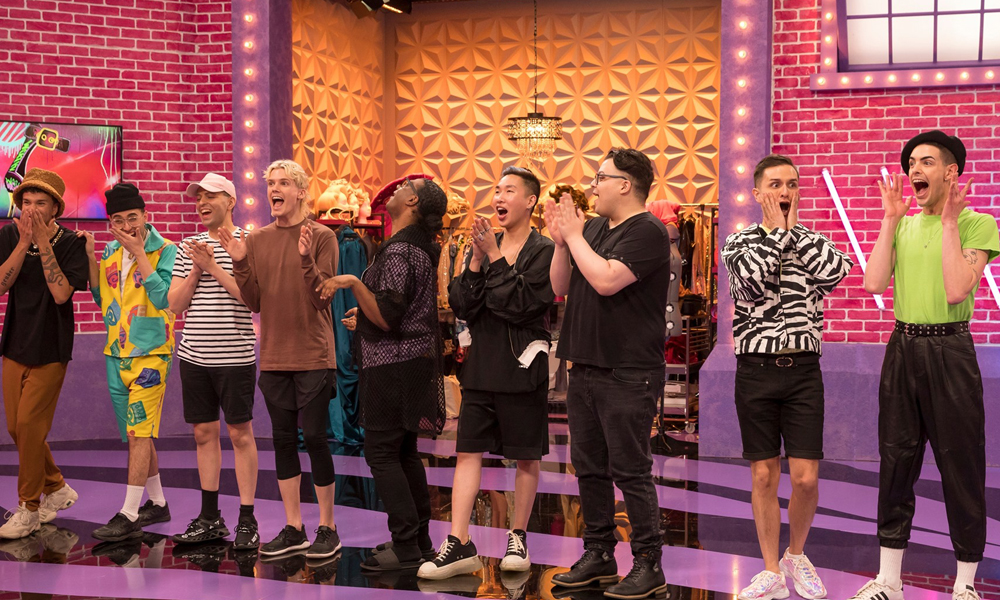 The queens shoot their shot at impeccable impersonation with Snatch Game and pay homage to Canadian screen icons on the runway. TikTok star Bomanizer and actor Connor Jessup are this week’s guests…

Last week we said goodbye to Calgary’s own Filipino queen Stephanie Prince after a terrifying over-acting horror challenge, and lip sync against Synthia Kiss. This week it’s Snatch Game!! Who will fumble and who will rise to the top of the competition after the show’s make or break challenge? Let’s get into it!

Our fourth episode begins in the werk room following Stephanie Prince’s elimination. Synthia is feeling grateful to still be in the competition after and intense lip sync, and she’s feeling ready for whatever is coming next. The remaining queens congratulate Adriana on her win. The next day the remaining queens enter the werk room and talk about how intense the last week was. Eve 600 tells the rest of the queens this week they’ll win a challenge, which doesn’t surprise the other queens since they’ve been saying it since week one. Gia is working hard and waiting for her time at the top to come. Ru interrupts with a video message with a message about stepping your pussy up. Brooke enters the werk room and tells the queens that the LIBRARY IS OFFICIALLY OPEN. The queens get to their fundamental reading, and after some pretty nasty reads, Brooke announces the winner of the reading mini challenge is Icesis Couture! Brooke then introduces this week’s maxi challenge which is none other than the infamous SNATCH GAME!

The queens get to work on their looks and getting their characterizations down. While the queen’s sus out who everybody is doing and talk about the importance of the challenge Brooke makes her way around the werk room to talk through some of the queen’s decisions. Brooke makes Pythia second guess her Grimes impersonation and tells Suki Doll she’s excited for her Yoko Ono. Eve takes a risk and toys with the idea of doing Bernie Sanders. It’s a choice, and if she does it well it could be iconic.

It’s time for Snatch Game, and the queens enter through the sh-etalk red carpet. Playing Snatch Game today is judge Brad Goreski, and Canadian influencer Boman Martinez-Reid (aka Bomanizer on TikTok). From the start it’s not really clear who the winners and flops of the challenge will be. But Synthia’s Rachel Zoe is always on, and has Brad Goreski laughing, which should count for a lot. Eve’s Bernie Sanders is pretty tame, and Pythia’s Grimes has some good jokes too, but at the end of the game it’s clear Synthia had the biggest impact.

Back in the werk room it’s elimination day, and as the queens get ready for the runway Eve complains about being disappointed in her Snatch Game performance, and Suki explains how there’s not a lot of representation of Asian queens, and the other queens join the conversation and talk about how important it is for them to become the representation they needed as kids. Out on the runway Brooke introduces this week’s judging panel Traci, Brad, and this week’s special guest actor Connor Jessup. Tonight, the category is “Made in Canada”. The queens are walking the runway in looks inspired by Canadian screen icons that paved the way. The looks included Synthia as Jeanne Beker, Suki Doll as Sandra Oh, Gia Metric as Mike Myers as Austin Powers, and Pythia as Catherine O’Hara. Following the runway Brooke announces Kimora, Synthia, Adriana, Suki, Eve, and Ptythia represent the tops and the bottoms of the week. The remaining queens are safe and head backstage to untuck.

Critiques start with Kimora Amour. Brad loved her Leslie Jones impersonation, and while it may have been one note, it was at a 100 the whole time. The judges all loved her Deborah Cox as Josephine Baker look. Brad loved Synthia’s Rachel Zoe, and told her she did a bananas good job, and the judges also loved her Jeanne Beker runway look. The judges like her take on Riverdale’s Vanessa Morgan, but all agree that her Sofia Vergara felt flat. The judges didn’t love Suki’s Yoko but adore her Sandra Oh runway look. Brad complimented Eve on their Bernie, but Brooke said the character felt dialled back. Connor makes a comment about her wig being a little flat. It doesn’t sit well. The judges loved Pythia’s commitment to her Grimes character and loved her Moira Rose runway look. Backstage all of the queens debrief and talk about who they think will be in the tops and bottom. Eve complains about the critiques they got about their slightly flat wig, and Suki stands by her Yoko decision and chooses to use it as a learning opportunity. The queens commend her endless positivity amid Eve’s constant complaining.

Following deliberations, the judges announce that Synthia Kiss is the winner of this week’s maxi challenge! Not bad for a queen who was in the bottom last week! Pythia and Kimora Amour are both safe with a giant stamp of approval from the judges. Suki Doll is up for elimination along with Eve 6000, which leaves Adriana safe from elimination. Sukie and Eve lip sync for their lives to “Happiness” by KAPRI. Following a passion filled lip sync, Brad announces that Eve 6000 will stay for another week, sending Suki Doll home. It’s sad to see such a positive queen go, but this is just the start for Suki Doll.

Front runner of the week: I don’t know about you guys, but I’m obsessed with Pythia and can’t wait to see what she does next week.
What we’ll see next week: The queens transform into country girl groups, and Canadian music icon Bif Naked is a guest!