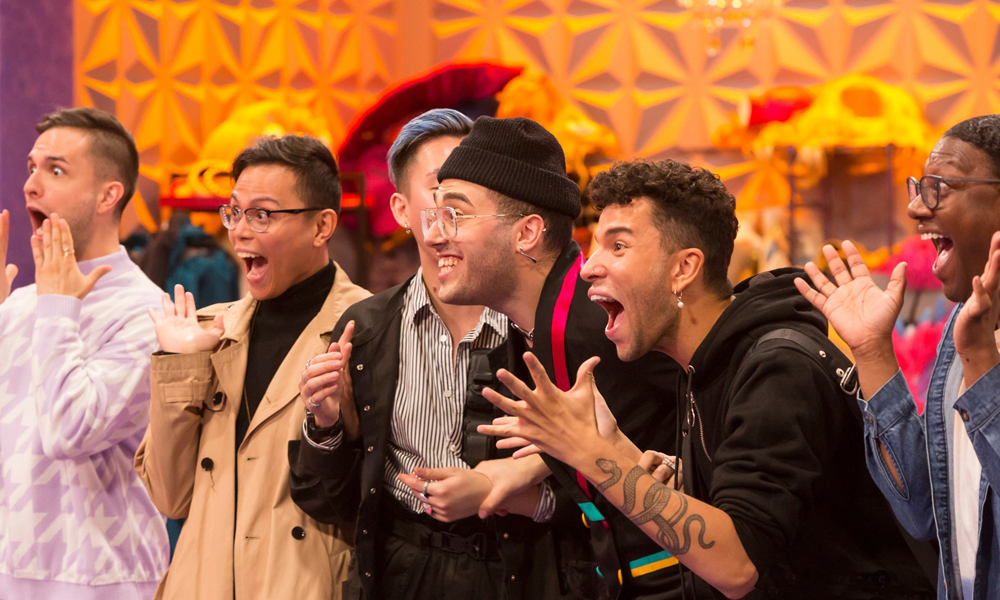 The queens over-act in a spooky slasher challenge, and Canadian music icon Fefe Dobson is a guest judge…

Last week we said goodbye to Océane Aqua-Black after the queens made their Rusical debut, and a circus themed runway. This week we’ll see the queens over-act in a pre-Halloween scream queen challenge, with special guest judge Canadian icon/Queen of early 2000s Canadian radio Fefe Dobson! Let’s get into it!

This week’s episode starts in the werk room following Océane’s elimination. Synthia is personally gutted that Océane is gone, but not to worry. Océane has written a novel of a goodbye message on the mirror. Icesis vows to not mess up and land in the bottom again after proving she’s versatile moving from top position to the bottom in a week. The queens congratulate Pythia on her well-deserved win.  Eve pulls out the dramatics, cries, apologizes to Kendall for last week’s comments, and makes it quite clear there’s an inner saboteur taking the wheel.

It’s a new day in the werk room the remaining queens are feeling optimistic about a new challenge. Ru interrupts with a video message, and Amanda enters the room and asks the queens if they’re ready to get spooky-ooky. Because for this week’s maxi challenge the queens will over-act in Screech! The queens give their best screams, and as the winner of last week’s maxi Pythia gets to assign the roles! Over on the couches the queens go through the script and assign the roles. There’s a bit of competition between some of the roles, which is settled by a quick game of rock paper scissors. The roles are assigned, and the queens get to work memorizing their lines, and getting the vibes of their characters down before filming. While painting, Kendall reveals she’s not really a fan of Halloween and opens up about her sobriety, and how drag saved her.

The queens head out to film where they will be directed by Amanda, and guest judge Fefe Dobson. Most of the queens take their notes well, Eve nails her part as the narrator (#DramaQueen), and Synthia is in her head a little playing a character based on Amanda (understandable). Filming wraps and it’s elimination day! The majority of the queens are feeling good about their performances, but there are a few feeling nervous about their big screen debut. While getting ready for the runway, the queens talk about their relationships with their parents, some rocky, some supportive. Brooke introduces the judges Amanda, Brad, and of course Fefe Dobson. On the runway the category is “Good Girl Gone Bad”, and the queens serve in their best revealing conservative to XXX latex outfits, some religious looks, as well as one moldy glamour queen. Following their walks down the catwalk, is the premiere screening of Screech! The film was a lot longer than I thought it would be and went exactly how you would expect it to go. Some queens really over-acted, and some hit their performance out of the park. Following the screening Brooke has announced that based on the performance in the film and the runway looks Icesis, Kimora, Pythia, and Sookie are all safe for the week. The remaining queens represent the tops and bottoms of the week.

The critiques start with Eve. Brad says the performance was spot on, and Amanda agrees. Brooke says they’re finally starting to turn a corner in the competition, but sometimes their performance on the runway lacks passion. The judges tell Stephanie Prince that she over-played the anxiety but underplayed the suspicion with her role. Pythia unravelled during her performance, and Amanda noticed. The judges noted that Gia asked a lot of questions on set and commended her with it. They also loved her moldy “good girl gone bad” look. Brad tells Kendall that her take on Brooke in the film wasn’t bad but it also wasn’t great, and her runway was kind of “basic Halloween queen”. Brad loved Adriana’s Brad role in the film, and Amanda loves her Marie Antoinette inspired look on the runway. The queens untuck backstage and go over the tops and bottoms of the week. Stephanie knows she’s in the bottom and gets emotional about it. After the judges deliberate Brooke announces that Adriana is the winner of this week’s challenge! Congrats queen! Gia Metric, Eve 6000, and Kendall Gender are safe for the week. Unfortunately, that means Synthia Kiss and Stephanie Prince are our bottom queens of the week and are up for elimination. The two bottoms lip sync for their lives to Fefe Dobson’s Ghost. After a spirited performance, Amanda announces that Synthia Kiss will stay to slay another week while Stephanie Price is the third queen eliminated from the competition.