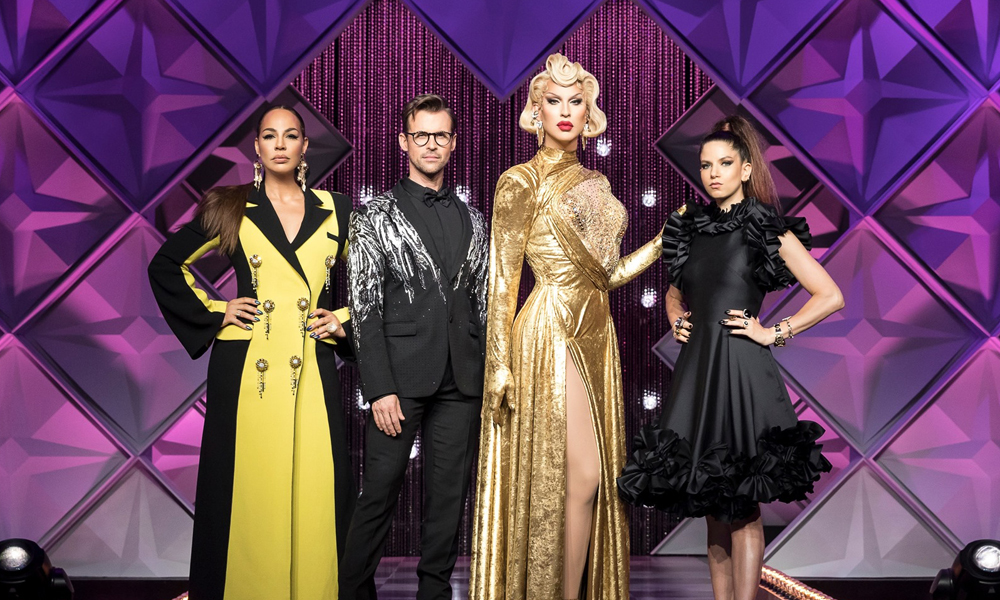 Oh Canada! We finally meet the queens of season two, watch them jump into a giant foam pit, and complete the first sewing challenge of the season…

To my fellow Canadian Drag Race fans, THE WAIT IS FINALLY OVER! The time has come for the premiere of the second season of Canada’s Drag Race. This season we’ll see some familiar faces return, as well as some new ones. Plus, we’ll finally meet a cast of new queens that will represent Canada’s best drag before a new Queen of the North is crowned. What are you waiting for? Let’s meet the new queens!

The season two premiere begins in our Canadian werk room with the queen to make the first entrance of the season, Gia Metric. Gia describes her drag has high-fashion-meets-intergalactic and that’s exactly what she’s giving. Next in is Scarborough’s Kimora Amore, and she’s guaranteed us a fun ass time because she is WHAT? Everything and more darling. Next up is Montreal’s Pythia who channeled her Greek roots into her theatrical Greek soldier look. Eve 6000 is up next, and she wants to let everyone know that despite her entrance catchphrase, she is NOT a flat-earther! Following Eve is Suki Doll, who is also from Montreal. Suki is detail oriented, and judging from her first look, she’s going to serve. Adriana from Quebec City is next, and she’s serving sexy Latina realness. Beth is next and she’s bringing camp glamour this season. Icesis Couture makes her entrance, and says she’s giving versatility this season. Following Icesis is Océane Aqua-Black and she’s saying whatever she wants, unapologetically. She won’t be doing any acrobatics though, just so we’re all clear. Stephanie Prince enters the werk room and lets us know she LOVES Cilantro. I know it’s a divisive opinion, but me too girl. Kendall Gender is next, with what may be one of the best drag names I’ve ever heard. She’s giving six-foot-tall supermodel realness with a bunch of personality, so she’s already doing better than her namesake! The final girl in the werk room is Synthia Kiss, who quickly joins up with her clique made up of Kendall and Gia. We know how cliques turn out in this competition, so we’ll see how these three make out.

Following the entrances, RuPaul appears onscreen to welcome the queens to the competition and offer some cryptic words of encouragements. Queen of the north Brooke Lynn Hytes, celebrity stylist Brad Goreski, and actress Amanda Brugel enter the werk room to formally welcome all of the queens to season two. This season the winner gets cash, as well as a “sickening supply of makeup from Shopper’s Drug Mart”, which is exactly the right amount of Canadian I was expecting. In the first mini challenge, celebrity photographer Caitlin Cronenberg is photographing each queen jumping into a foam pit while trying to snatch the crown. The queens take turns taking their photos and climbing out of a foam pit in front of all of the judges, and exit stage left to get out of drag in the werk room. The judges re-enter the werk room and announce that the winner of the first mini challenge is Suki Doll! Amanda and Brooke then tell the queens that for this week’s maxi challenge which is to create Haute premiere looks from forgotten coat check items to wear down the runway. Suki Doll gets a small advantage for winning the challenge, but soon all of the queens are ripping items off the rack to create their looks.

The queens bring their loot back to the tables to start working on their high fashion looks, and I’ll be honest…it’s hot trash mama. These items look like a clearance section at a Party City, so it should be interesting to see how the queens can pull this together. As expected, there are some queens that are “concerned” they’ve already been met with a sewing challenge so soon into the competition, if you know what I mean… (I mean they can’t sew). I’ve actually learned to sew since last season, so I personally *can’t relate*, but I can imagine how stressful it is to have nothing but plastic neon-coloured top hats to work with for a runway challenge

It’s elimination day, and some of the queens are feeling confident about their looks, but concept and runway presentation are key in this challenge for those who aren’t feeling as excited about their original looks. It’s revealed that Océane pulled a Eureka and injured her knee in the mini challenge. Océane also tells the other queens she does her makeup without being able to see (she can’t see without her glasses) and says that her drag is more about the performance she gives. Kimora Amour tells the other queens about her supportive teenage son, and how much their love brings strength to her while being in this competition. Out on the runway Brooke Lynn Hytes introduces the judges Amanda Brugel, Brad Goreski, and this week’s special guest, mini challenge photographer Caitlin Cronenberg. The queens take turns on the runway, and there are a lot of impressive looks made from the coat check lost and found. Following the runway, the judges decide that Pythia, Kendall Gender, Adriana, Océane, Kimora, and Synthia Kiss are all safe for the week. The remaining queens represent the tops and the bottom of the week.

Beth is first, and Brad tells her the creativity is good, but he wanted a little more from the bottom half of her outfit, which the rest of the judges agree with. Suki is up next, and the judges are gagged over her 1920s murder mystery heiress look. Eve is next and while her concept was well-received, but the execution wasn’t all the way there. Stephanie is next and hit it out of the park with her dress made of flyers (which some of the queens read her for the day before). Amanda liked the whimsy of Gia’s look, but she and the rest of the judges agreed that the outfit didn’t fit the “red carpet eleganza” of the challenge. Icesis is last, and the judges all love her creativity with her Vivienne Westwood inspired look and give her a few light tips to elevate it further. The queens gather backstage ahead of the first lip sync of the season while the judges go through the pros and cons of the tops and bottoms. Following deliberations, Brooke Lynn announces that Icesis Couture is the winner of this week’s challenge. Stephanie, Suki, and Eve 6000 are all safe, leaving Gia Metric, and Beth to lip sync, but not before Eve 6000 puts on the show of a lifetime whimpering her way to the back of the stage after being saved. We love a drama queen! Beth and Gia lip sync for their lives to “Maneater” by Canadian music icon Nelly Furtado, and both queens are giving very different performances. While Gia’s is electric, Beth’s is slower and sultrier. Following this season’s first lip sync Brooke announces that Gia Metric stays to slay another day, while Beth becomes the first queen to be eliminated from season two of Canada’s Drag Race. Beth! We hardly knew ya!

Front Runner of the week: First impressions are everything, and based on the first challenge, I have to give this one to Icesis Couture, and Suki Doll.
A moment I would like to forget: Eve 6000 sobbing all the way to her safe position on the stage before the lip sync. It was a bit melodramatic, but hey…THAT’S DRAG BABY!
What we’ll see next week: It’s Rusical week! And the queens are singing LIVE! And Canadian dance icon/Summer 2021 IN Magazine cover star Hollywood Jade choreographs and guest judges!