RuPaul's Drag Race All Stars 6 Episode 12 Finale Recap: This Is Our Country

The final four go a little bit country for their last challenge, before a new All Star is crowned in the finale episode, and we are gagged the house down cowboy boots mama!…

We’ve finally made it to the end of the All Stars race. This season we watched as legendary queens took their shot at redemption. We waited in anticipation for the “game within a game”. We were on the Snatch Game of Love rollercoaster, and we’ve finally made it to the finale after Trinity was eliminated at the end of last week’s episode. Although Trinity didn’t make it to the finale, she has left the All Stars competition with many new fans, including her season six sister Bianca Del Rio, who has been very vocal about how proud she is of Trinity this season on Twitter. Kylie Sonique Love, Ginger Minj, and Ra’Jah O’Hara are heading into this season’s finale, with Eureka! joining them as they reclaimed their spot in the competition after winning the “game within a game”. Only one hour, one runway, and one new “RuPaul original song” stand between us, and the winner of All Stars 6, so for one last time this season, Let’s get into it!

This week’s episode starts in the werk room following Trinity’s elimination. The queens excitedly enter the werk room and celebrate being in the top four. Over on the couches, they tally the votes from the lipstick box, and the majority vote was for Trinity, who was the only one who voted differently (for Ra’Jah). The queens talk about their individual journeys, and how much they want the crown. It’s still anybody’s game, and only one challenge stands between these queens, and the crown. The next day in the werk room, the top four enter, and read Trinity’s message on the mirror. Ru interrupts with a video message to tell the queens that any queen can make a song, but it doesn’t mean anything unless people are singing along. Ru enters, and announces that the final maxi challenge, the queens will be collaborating on a new Ru song, this season it’s country y’all. The queens will each be writing their own verse. As a special virtual guest, country music star Tanya Tucker! Tanya tells the queens to never give up on their dreams, and answer the queen’s questions about country music, and advice on perseverance.

The top four queens, who all happen to be southern, get to country song writing. This isn’t Ginger’s first rodeo with song writing, and she admits that fitting so much into the little time she has. Eureka works on using their verse to say something smart that will make people think, while Kylie really wants to take her verse back to her country roots. Ra’Jah takes the opportunity in the challenge to address racism in America, and Black Lives Matter in her verse. After the queens write their lyrics, they head out to the main stage where Jamal Sims is waiting for them to choregraph the performance. The song is a little bit country, a little bit pop, and a little bit hip hop, so the choreography will incorporate a bunch of different dance styles. Ra’Jah, and Eureka both start a little rocky, but will get the steps down for the performance. Jamal includes Kylies “backroad bitch attitude” into the choreography, which includes bandana-ography, and Ginger’s routine is oozing sex, which as we know, is very on-brand for Ginger.

Following the dance rehearsal, the queens take turns chatting with Ru and Michelle about their experiences this season. Eureka is up first and talks about how important it was for them to win in season 10 for their mom. Eureka tells Ru and Michelle it would be important to win this crown as a plus size queen, as it’s a platform that is very important to them. Next is Ginger, who Ru says is one of the biggest stars to ever come out of the Drag Race franchise. Ginger returned to the competition with unfinished business from her disappointing run on All Stars 2. Ginger has mixed professionalism with fun this season and has really enjoyed the ride. Kylie tells Ru and Michelle how she had to learn she could embrace her feminine, and masculine sides at the same time, and how important it was for Kylie to see somebody like RuPaul when she was younger. Ru tells Kylie that sharing her story and gift is helping so many people, and how much she surprised them this season. Ra’Jah is last and talks about how she had to drown out the noise from the internet following her original season. Michelle tells her that the looks she brought to the runway this season are incredible, and really show her maturity as a queen from the first time they saw her.

It’s finally coronation day! The queens get ready for the last time this season, and discuss track records, and have fun with the performance. Out on the runway Ru introduces the judges, which is just family for the finale (as always). Ru takes her spot on the panel with Michelle, Carson, and Ross to watch the live performance of This is Our Country. Each of the queens take turns performing their original verses, and individually nail the choreography. It’s a solid and strong performance by all four queens. Out on the runway, the category is All Star Hall of Fame Eleganza Extravaganza. The top four all look stunning in their final runway looks. Following the runway, Ru tells the queens it is her honour to pick the winner of this season before getting to the final critiques. Michelle tells Eureka that her final look is the best they’ve ever seen them in. Ross tells them they look like a star, and all of the judges loved their lyrics in the song. Eureka gives a moving speech about being a plus size queen, and always evolving to be the best version of themselves. The judges tell Ginger how gorgeous and camp she looks. They loved how much fun she had during the performance, and Ross compliments her on how enjoyable she was to watch this season, even with the expectations the judges had of her from day one. Ross loves that Kylie wore an American flag as her last look, and Michelle tells Kylie that throughout this season Kylie has shown so much more of herself than what everyone originally thought. Ross compares her to his favourite reversible bomber jacket, and Kylie talks about reclaiming her twang, which she was once ashamed of. Michelle tells Ra’Jah that she had memorable moments every week on the runway, Carson loved her verse in the song, and Ross compliments her journey this season from a dress in 60 seconds, to a gorgeous handmade finale gown. This is a strong top four, and every single queen standing deserves the crown, and the spot in the Hall of Fame. While the queens untuck backstage, the judges deliberate, and go over each queen’s journey this season before picking a winner.

The queens make their way back to the main stage in new outfits before getting a virtual message from the reigning All Star Shea Coulee. Based on this week’s performance, and their season-long track records, Ru has made some decisions. Ru announces that Ra’Jah, Kylie, Ginger, and Eureka will have to lip sync with passion one final time, ONE AT A TIME before she crowns a winner. Each queen takes a turn giving it their all, lip syncing for the crown to “Stupid Love” by Lady Gaga (Chromatica forever!). All of the queen’s lip syncs are passionate, and nobody is letting anything stop them from getting that crown, including Kylie saving a potential ankle breaking slip, by pivoting into a somersault, and also sticking the landing. It was so incredible it had to be watched three times. Following the lip sync the time has come to FINALLY crown our queen! 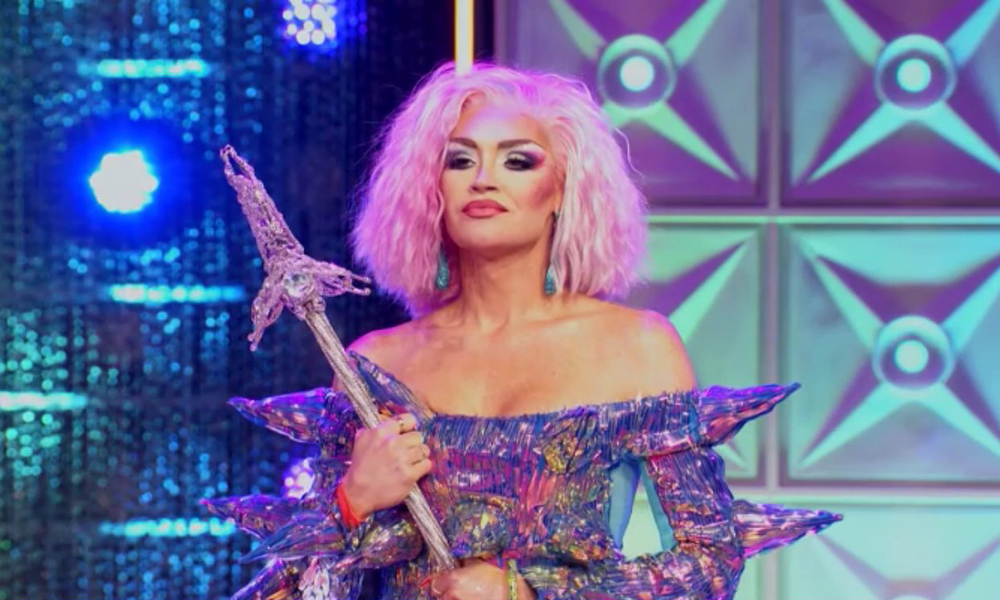 The winner of RuPaul’s Drag Race All Stars 6, and the queen who will have her portrait hung in the Drag Race Hall of Fame is…KYLIE SONIQUE LOVE! It’s been 11 years since she first competed on the show in season two. Kylie is OFFICIALLY our new Queen Supreme, and is also the first trans queen to win a crown! Condragulations Kylie! You’re a true champion. See y’all next season!