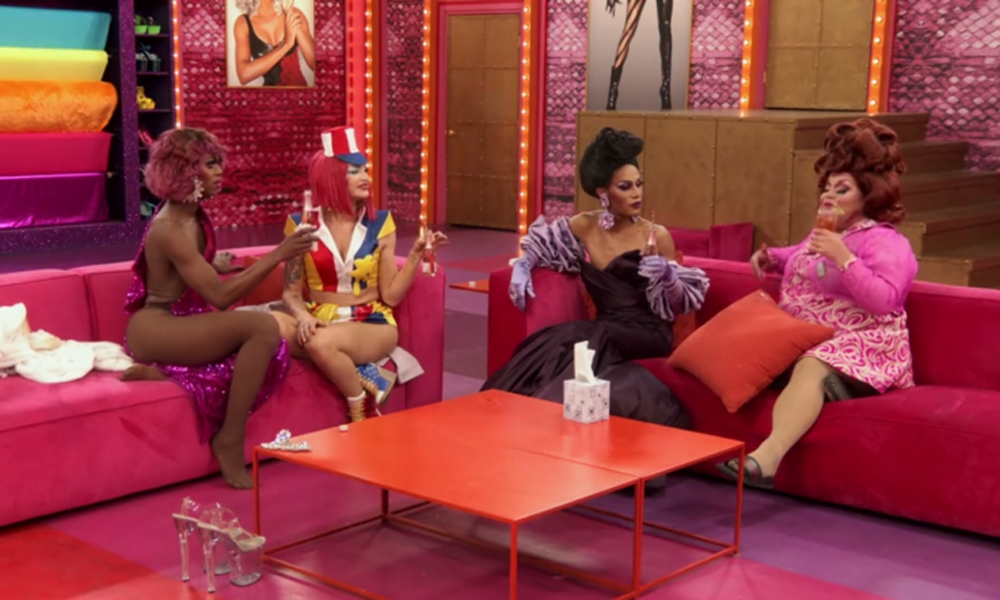 The remaining queens welcome back an eliminated sister for a second chance at the crown, and perform original monologues on the main stage before the top four of the season is announced…

We ended last week’s Lip Sync Battle Royale on a cliff-hanger. Following a passionate final performance battle between reigning lip sync assassin Silky Nutmeg Ganache, and the most recent eliminated queen Eureka to Kelly Clarkson’s “Since U Been Gone,” both the audience, and top four queens were left in suspense waiting for the winner to be announced. This week we’ll find out which eliminated queen has another chance in the competition, and the race for the crown continues with a monologue challenge. Let’s get into it!

This week’s episode starts where last week’s lip sync battle left off. Ru announces that Eureka will get another chance in the competition. After beating six other queens in lip syncs, Silky’s race is officially over, but she’s leaving All Stars 6 with legendary status, and a lot of new fans. The next day in the werk room, the top four enters the room anxiously anticipating the mystery queen who will be re-entering the competition. Trinity asks the other queens if they’re “really ok with another queen coming back”, and the rest of the queens tell her it is what it is, she’s just going to need to roll with it. Ru enters the werk room in a floral suit to reveal the queen who is returning to the competition. Eureka makes a grand re-entrance and rejoins the group.

This week we get a mini challenge! Listen, Pride is a time where we all get to let loose and celebrate. But that’s not the case for our favourite hard-working queens! In this week’s mini challenge, the queens will customize a “Pride perfect” outfit using Levi’s Pride collection and show it off in a photoshoot. The queens take turns filling the werk room with Pride. Ru announces that the winner of this week’s mini challenge is Kylie Sonique Love. Ru also lets the queens know that for this week’s maxi challenge, the queens will be digging deep performing monologues about their true lives as drag queens. They will be judged on how well they can tell their stories with emotion. As the queens get to work on their monologues, they formally welcome Eureka back to the competition, and while they’re happy Eureka is back, they know that the other queens will be choosing their lipstick to go right back home. Trinity is very nervous to underperform this challenge, and knows if she does bad, there’s a good chance she’s going home. Loving the optimism Trinity!

Out on the main stage the queens get to rehearse and workshop their material with Alec Mapa, and Jermaine Fowler. Ra’Jah is up first and she’s naturally funny so she should pull it out, but she struggles a bit with flow. Kylie tells the guests public speaking thanks to a traumatic memory from elementary school, but absolutely knocks it out in her rehearsal. Trinity’s rehearsal starts well, considering she bombed her stand up set week one, but has a few things to work on before the challenge performance. Unsurprisingly, Ginger Minj has an entire monologue produced, but Alec and Jermaine think that it sounds too pageant, not “real”. Will Ginger be able to roughen her professional edge a little for the challenge? Finally, Eureka chooses to go with a poop story, which makes the guests judge laugh, but they tell them to dig a little deeper. How can Eureka make poop a metaphor for something else?

It’s performance/elimination day, and the queens are busy painting for their monologue performances. Trinity is still feeling “paranoid” over the stakes of this challenge, Kylie talks her down, and tells her to relax, and enjoy getting this far in the competition. Ra’Jah tells the other queens she’s surprised she’s made it this far, but is enjoying every minute of it, and Eureka tells Trinity that the flirty energy between them is very special, and important to Eureka specifically since they don’t get a lot of that same attention out of drag. Trinity tells Eureka they’re marriage material, and it ends with a friendly kiss. Ginger tells the other queens this is the last time the voting is up to the queens, since the top four will be going to the finale. Out on the main stage Ru introduces the judges, as well as this week’s guest judge, writer Justin Simien, and it is finally time for the queens to perform their monologues. 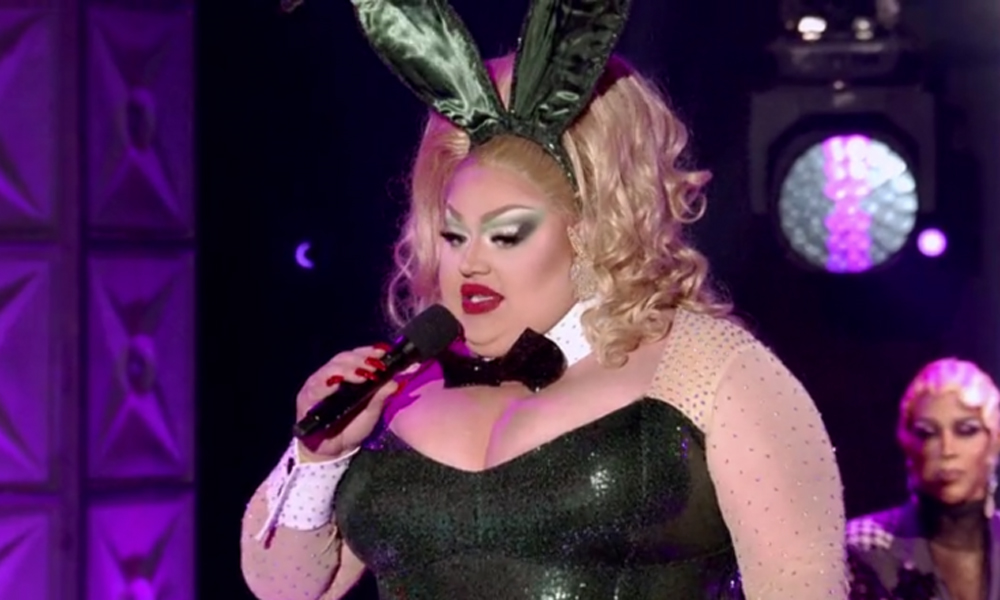 The Charisma, Uniqueness, Nerve, and Talent Monologues start with Bamboozled by Trinity K. Bonet. She talks about being catfished on a date, but the catfish turned out to be an HIV positive fan who thanked her for giving her strength during a hard time. Trinity’s performance is strong, it was full of heart, while also ending with a few laughs. Next is First Time performed by Kylie Sonique Love. Kylie talks about the first time she ever performed in drag, and how important it was for her journey. Up next is My Ruby Slippers by Ginger Minj. Ginger’s monologue is about growing up in a small conservative southern town, playing in her mother’s red shoes pretending to be the Wicked Witch of the East, and pivots it into a story of her mother accepting, and supporting her. It’s funny, emotional, raw, and performed perfectly. Ra’Jah is up next performing Bunny Tale. It starts strong but Ra’Jah quickly blanks but brings it back around to tell the story of her first tuck. Eureka is up last, and transforms her most embarrassing poop story, into a story about perseverance, professionalism, and learning to laugh at yourself. All five performances are strong, and it will be another tough challenge to judge.

Following the performance, the category on the runway is “Oops, I Did it Again: A Fashionable Fashion Fail”. The queens walk the runway making fashion fails WORK FOR THEM. The critiques start with Trinity, and although the judges loved her story, the timing was a little off, which could cost her. Ra’Jah stumbled in the beginning which the judges do clock, but her performance pulled her through. Carson tells Kylie she is a fantastic and vulnerable storyteller which really came through in her performance. The judges tell Ginger her performance was excellent, but to watch out for things being “too polished”. The judges loved Eureka’s story and praised her vulnerability and say Eureka’s monologue felt the most conversational out of everybody’s. Based on the critiques Ru announces that Eureka is the winner of the challenge, and the top All Star of the week. The rest of the ladies are in the bottom and are up for elimination.

Backstage the queens congratulate Eureka on her first challenge win, as well as a spot in the finale. The bottom queens talk amongst themselves, and take turns talking to Eureka campaigning for a spot in the final. Over on the couches Trinity breaks down with the possibility that her top four spot can be taken away from her. Ginger says her track record this season should speak for itself, and Kylie agrees about her own performance this season should warrant her a spot in the finale. The queens vote for the last time, and Eureka makes her choice before heading back out onto the main stage. On the runway Eureka is met with her lip sync assassin who is none other than Jaida Essence Hall, the season 12 winner. Jaida and Eureka lip sync to “Good Golly Miss Molly” by Little Richard, and both queens pull out all the stops for an electric performance. Ru decides that both Eureka and Jaida win, which means there is a possibility for two queens going home if there are different names on the lipsticks. Jaida reveals that the queen the group has chosen to go home is Trinity. Eureka reveals the queen going home is also Trinity. 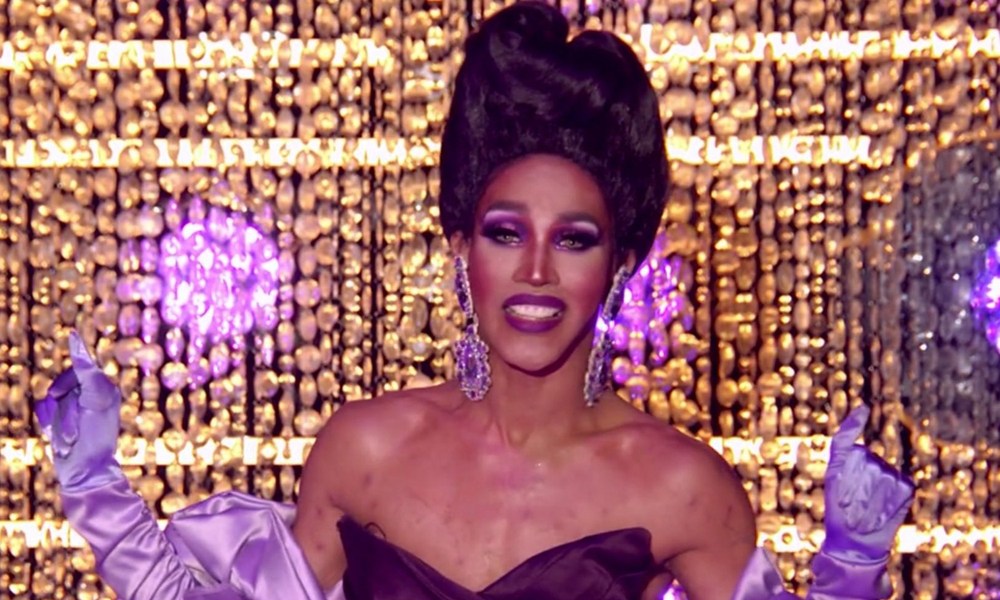 Trinity is going home one episode shy of the finale, but with her head held high. She’s a superstar. We’ll miss you Trinity, BUT WE’VE GOT A FINALE TO PREPARE FOR!

What we’ll see next week: Top four celebrate and collaborate on a Ru song for the final challenge of the season. You KNOW there’s some choreography to learn before a new queen is FINALLY crowned and inducted into the Drag Hall of Fame.