If you’re a passionate tennis fan and a podcast listener, Ready Play Tennis is the ultimate podcast for you…

Keeping up with what’s happening on and off the courts can be a struggle. Sure, you can get your tennis news, updates and gossip from Sports Illustrated, TSN, Sportsnet or ESPN, but wouldn’t you rather stay up to date on all things tennis from a gay-hosted podcast completely dedicated to the sport? Look no further than the Ready Play Tennis podcast.

Toronto-based Aldwin Era and Jason Patterson are two openly gay tennis fanatics who launched their weekly podcast last year, just before the pandemic hit. Though pro tennis has taken a hit in the past year, that didn’t stop the two from serving up the latest tennis tea, and dishing about the latest headlines from the ATP and WTA tours and more locally on the GLTA [Gay and Lesbian Tennis Alliance]. They’ve had a ton of fun, received a ton of industry praise and have even interviewed a few tennis faves.

The pair met back in 2015 at Woody’s in Toronto’s gaybourhood at an after party for a gay Dodgeball league. A mutual acquaintance told Aldwin, who was very active in the gay tennis scene, that Jason wanted to get back into the sport. After a quick introduction the two became good friends and started playing regularly, eventually hitting the road together to Montreal, Indianapolis, Detroit and New York to participate in GLTA events.

We caught up with the two to chat about their passion for the game, putting together a podcast during unprecedented times, their favourite players, the gayest moment in tennis history and more.

Tell us about the Ready Play Tennis podcast.
Aldwin: It’s a weekly pod that covers the world of tennis from our unique perspective as gay amateur players obsessed with the sport. When you tune in, you get some thoughtful tennis analysis, but what I truly think brings our listeners back week after week is our playful chemistry and our knack for engaging the world’s best players in a little off-court commentary. I mean, just ask tennis bad boy Nick Kyrgios what he meant exactly when he called us “albatrosses” in Season 1.

What can listeners expect to hear?
Jason: Unlike most professional sports, the pro tennis season is year-round, with tournaments all over the world. We cover the women’s [WTA] and men’s [ATP] tour events, who’s playing well, who’s on the rise, and give words of encouragement to those floundering. We talk about our own play, like Aldwin crying on court when his forehand is working, or my cheesy chip shots and struggles with my backhand.

We also love sharing our interactions with all the tennis players we reach out to through our social media platforms. I still remember when we first premiered and Aldwin noticed that Serena Williams had watched our Instagram story. He shared with our listeners that he was having heart palpitations. Having said that, even after numerous attempts, I still haven’t gotten Vasek Pospisil on our show. Not even my dead schnauzer could convince him otherwise.

How did you guys get the idea to start a tennis podcast?
Aldwin: The idea emerged in January of 2020 when – after endless hours of car-ride banter, shuttling ourselves to and from tennis tournaments – Jason and I decided it would be fun to let an audience in on the kiki. It was all about brainstorming ways we could channel our passion for tennis into a creative outlet. We tinkered with a few ideas, learned a lot – pattern-making is not in our wheelhouse of skills! – and starting our own pod just seemed to be the most accessible vehicle for us to share our love for the sport.

A couple of microphone and recorder purchases on Amazon later and we officially launched the Ready Play Tennis podcast last May.

In Season 1 you interviewed your first big player, Genie Bouchard. How did that come about?
Jason: As Aldwin shared with Genie during the interview, he was on vacation and I was ‘hard at work’ doing a promotional post about Genie’s success at a tournament in Prague. Aldwin decided he needed in on the action and posted a beach story with him and his friend Antonio in a unicorn floaty, asking Genie to come on the show.… She shared it with her 2.1 million followers and said ‘100%… Just Tell Me When.’

We had a great interview with her – and with other players like former world #1 Victoria Azarenka, Christian Harrison and Canadian Leylah Annie Fernandez.

We try to take a different approach to player interviews. Players are asked such banal questions from reporters, some of whom don’t seem to know much about tennis. We engage players in the sport, but also keep it fun, asking them about gelato flavours, go-to karaoke songs, and playing our rapid-fire question game ‘The Changeover.’

Your dream podcast interview?
Jason: For sure Juan Martin Del Potro from Argentina.… I’ve cried many times watching him, including when he beat Roger [Federer] at Indian Wells in 2018, and his silver medal run at the Olympics in Rio in 2016 after nearly three years away with wrist injuries.

Aldwin: I would literally die and come back to life if Steffi Graf agreed to come on our pod. I was a little seven-year-old gay boy when I watched Steffi play for the first time, at the 1989 French Open. I begged my dad afterwards to buy me a Dunlop racket so I could smash forehands just like she did. She is my all-time idol. 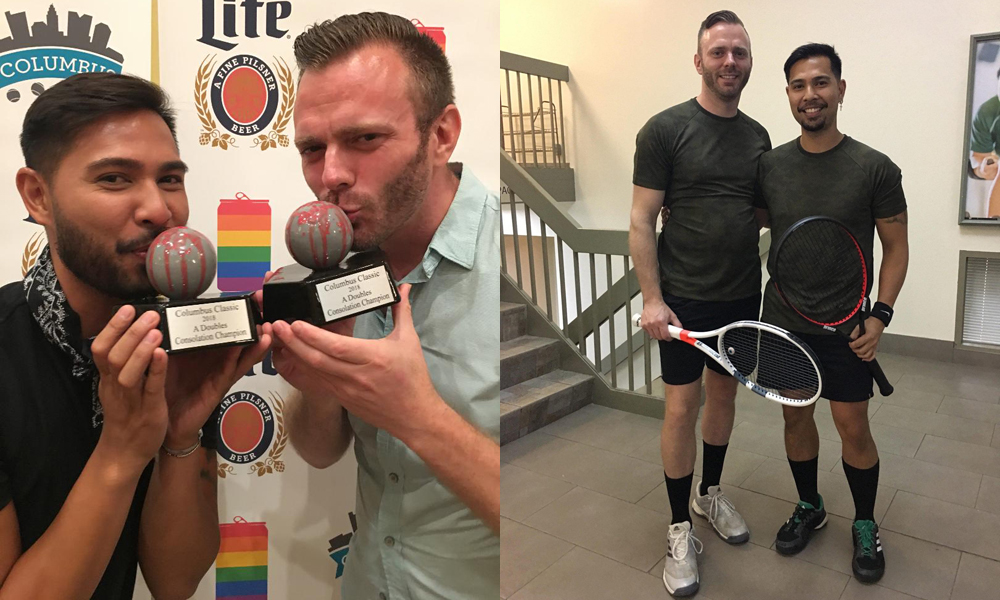 How have you been putting the podcast together during COVID?
Aldwin: With prayer and black magic. Kidding. The real stars of this process are iMessage, GarageBand and Facetime. Jason and I will shoot each other a few texts during the week about intriguing tennis headlines – like Canadian tennis star Denis Shapovalov making his rap music debut during last year’s US Open – and these messages end up becoming the bones of our weekly show.

Everything happens on Sunday because most weekly tournaments will have a champion by the time we record. We meet via Facetime, prep with a run-through of story topics and dive right into recording, usually with a refreshing beverage to help steer conversation. Once another episode is in the bag – along with an empty bottle of Kim Crawford – we divide and conquer the responsibilities to get the pod edited, uploaded and ready to share for our drop on Wednesday morning.

How has the tennis world dealt with the coronavirus pandemic?
Jason: With events happening all over the world, some get cancelled, some have no fans, and some seemingly have too many fans. The Australian Open season was the craziest, with players arriving early to quarantine for 15 days. The agreement was they could have time out of their hotel room to train and practise, but about 72 players ended up on flights where other passengers tested positive for COVID-19. Those players were immediately disadvantaged and could not leave their room for any reason.… The drama of that and watching players work out in their room or hit tennis balls against urine-stained mattresses – that was Vasek btw – was so funny, and gave us six weeks of content through the end of the tournament.

What’s next for the podcast?
Aldwin: Alongside increasing engagement and listenership, Jason and I are excited to explore new interview opportunities with different voices in the tennis world – like chatting with acclaimed tennis journalist Jonathan Scott – and partnering with a myriad of tennis-centred organizations to bring increased visibility to the sport. As members of both our local TLGTA [Toronto Lesbian and Gay Tennis Association] and international GLTA, we are also keen on finding ways to give back and support our LGBTQ2+ tennis communities through our platform.

Who are your favourite tennis players?
Jason: For sure Juan Martin Del Potro from Argentina… I heart ‘DelPo’ so much.

Aldwin: Of all time? Steffi Graf. Current faves include my boyfriend in my head Stefanos Tsitsipas, snack-attack Christian Harrison, Canadian gem Leylah Fernandez and tour bestie Genie Bouchard. Venus Williams also has a special place in my heart because I have been by her side since 1997, for every win and every heart-breaking loss, and I just can’t quit her.

Quick. Answer this question: The gayest moment in tennis history is…
Aldwin: Actually, it literally happened in April, when tennis immortal Rafael Nadal debuted his new Nike kit at the Monte Carlo tournament. Watching him step on that ochre-coloured clay court in those bubble gum pink booty grabbers made me believe for just one second that I had stepped into a gay foam party in Mallorca. Girl, those short shorts were so lit they set gay Twitter on fire!