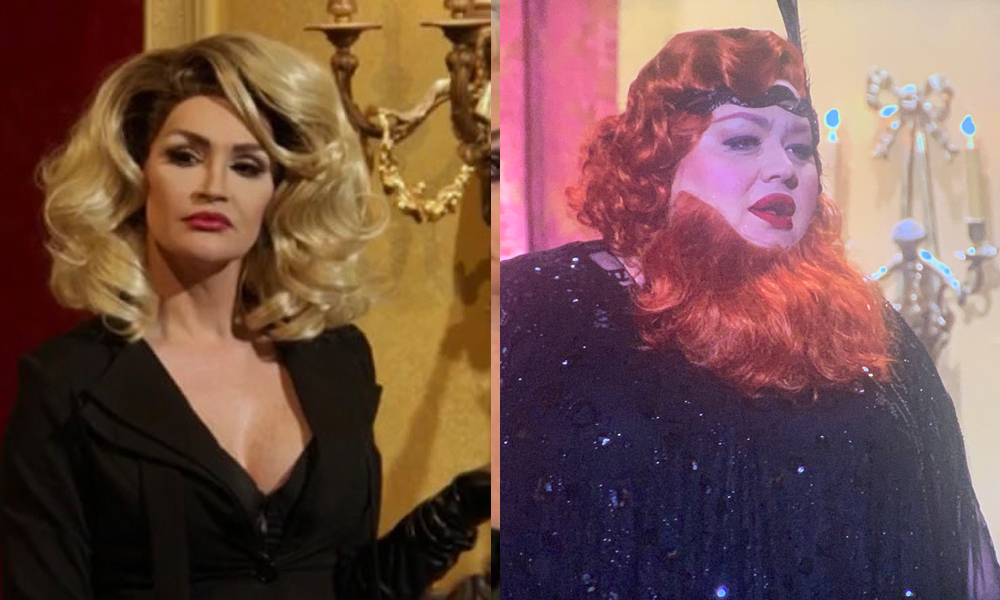 The queens get spooky in an American Horror Story inspired challenge, and get drop dead gothic on the runway…

Last week we said goodbye to glamour queen Scarlet Envy after a talk show challenge. Scarlet was eliminated due to the fact she didn’t share as much vulnerability, and trauma as the other queens which has started a conversation online about the expectations to trauma-dump on the main stage in order to gain respect from the judges and be considered a fierce competitor on the show. Both Kylie and Jan also received similar critiques about their performances in the challenge being too positive. This week we will see the queens compete in an ooky, spooky acting challenge. Let’s get into it.

This week’s episode starts following Scarlet’s elimination. Ginger is still beaming after winning the challenge and lip sync, and the queens congratulate her. The queens get to opening the box, and the votes were split evenly between Scarlet and Jan, and Jan is feeling a little bothered by it. Jan tries to explain herself to the queens but does so unsuccessfully. Kylie thanks the group for not voting for her to go home, and Ginger reveals that she nearly chose her based off her performance alone. Yikes. If we know anything about All Stars, it’s that you can go from the top to the bottom, and nobody is EVER safe from elimination.

The next day in the werk room the queens gather to read Scarlet’s goodbye note. Ru enters the room, plugs his custom suit, and tells the girls that whoever makes it to the hall of fame needs to be “bewitching”, because this week the queens will be over-acting in an American Horror Story inspired challenge. They will each play roles celebrating iconic actresses from the Ryan Murphy multi-verse like Emma Roberts, Jessica Lange, Angela Bassett, Sarah Paulson, and Kathy Bates. Ginger and Kylie rock paper scissors over the Jessica Lange role, and Kylie wins. The queens decide on the rest of their roles and get to rehearsing. As they queens get to know their roles, they receive a video message from the iconic Angela Bassett herself to answer any acting questions the queens may have. Angela tells the queens to root their performances in real emotion.

It’s finally time to film Rumerican Horror Story with directors Ross and Michelle. Ra’Jah has some issues with the lisp she’s supposed to be, but Trinity has got Angela’s mannerisms down. A’Keria needs some direction from Ross and Michelle. Ginger who has given the last role available nails her Emma Roberts part, and Jan was born to over-act as Lea Michele. Kylie has some trouble getting the emotion for her role right. Michelle gets out of her seat to show Kylie exactly what she wants, and after a quick example Kylie nails it, and that’s a wrap on the shooting.

It’s elimination day in the werk room, and Kylie is feeling nervous about her performance in the challenge. Ra’Jah is feeling disappointed that Ross and Michelle didn’t love the character concept she had come up with for her Sarah, and Kylie tells her not to be so hard on herself. Meanwhile Trinity is over at the mirrors massaging their new maybe partner Eureka. A’Keria demands to know what’s up with that, and Trinity simply says Vanjie and Brooke Lynn don’t get to be the only Drag Race couple. In confessionals Eureka says it’s none of our business. I’m sure this isn’t the last we’ll see of this showmance. Over at the vanity, the queens talk about their experiences with witchcraft, and A’Keria reveals it is her dream to own a funeral home. She wants to live that My Girl fantasy, I guess.

Out on the main stage Ru introduces the judges, and this week’s special guest judge scream queen Emma Roberts. On the runway, the category is “Oh My Goth!”, and the queens look stunning in their dark and gothic looks. Following the runway is the world premiere of Rumerican Horror Story: Coven Girls. It turned out about as well as expected from the rehearsals, but Jan’s Lea, Ginger’s Emma, and yes… even Kylie’s Jessica are the stand outs from the challenge. Based on the Coven Girl performances, and the runway looks, Ru decides that Pandora, and Trinity are both safe for the week.

Critiques start with Ginger Minj, and Ross tells her she stole the scene. Emma Roberts gives Ginger her stamp of approval on her Emma/Madison Montgomery character. Michelle likes her runway look. Emma tells Eureka she loves their energy both in the challenge and on the runway. Michelle gushes over Eureka’s runway, and tells her she loves Eureka’s commitment to really going for it in a challenge, but can sometimes be too much, and Ross agrees. Michelle loves Ra’Jah’s runway, Ross said he could see Ra’Jah getting disappointed in the challenge, and Michelle tells her she just has to work with directors a little bit more. The judges tell A’Keria her runway look is gorgeous, but her performance was a bit monotone, when she should have been deadpan. Ru says the character felt underdeveloped. Michelle liked Jan’s runway, and tells her she’s so proud of her performance as Lea. Michelle loved Kylie’s runway but admits getting her to the Jessica Lange place in the challenge took a little work, but when she got there, she was THERE. Ross praises her hustle with getting into the role and following direction. Ru tells Kylie she could not take her eyes off of her during the challenge. Based on the judge’s critiques, Ru announces that Kylie Sonique Love is the Supreme All Star of the week and will be lip syncing for her legacy later. Ginger, Jan, and Eureka are all safe for the week leaving Ra’Jah and A’Keria as the bottom All Stars of the week. 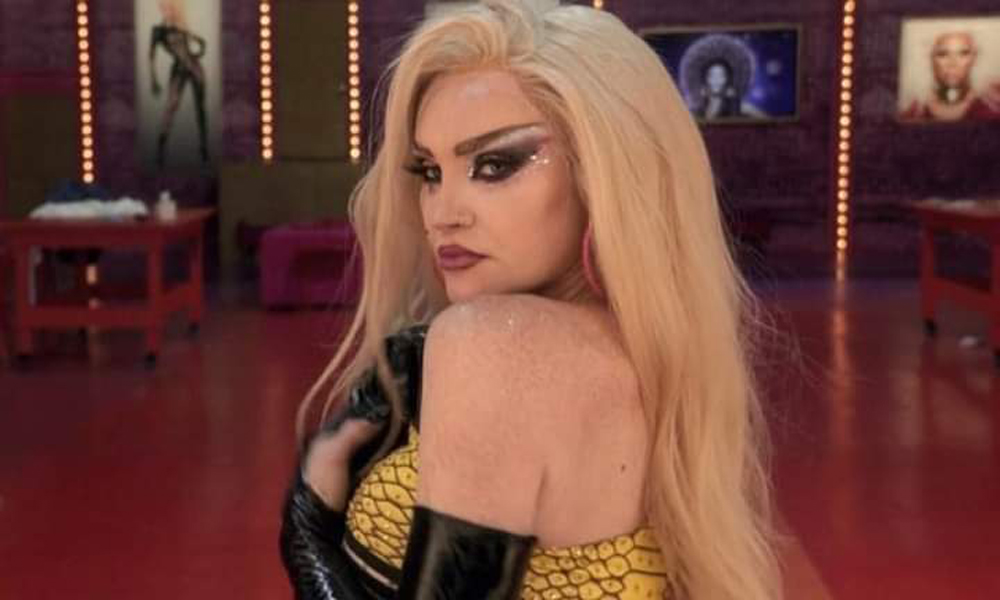 Backstage, Kylie is feeling great about winning her first challenge. A’Keria and Ra’Jah take turns pleading their cases to both the group and Kylie. A’Keria tells Kylie that she still wants it so bad, and Kylie tells her she can notice that. Ra’Jah tells the group it’s hard being in the bottom with her sister, and the last time they were in the bottom together, A’Keria sent her home. A’Keria tells the group that this may be her third time in the bottom, but she still wants to fight for the crown. The queens cast their votes in the lipstick box, and Kylie makes her final choice.

Out on the runway Kylie is met with her lip sync assassin, who is revealed to be Drag Race legend Manila Luzon. Kylie and Manila lip sync for their legacy to “Dirrty” by Christina Aguilera. As far as the lip sync goes, Kylie bodies it in more ways than one, so it’s no surprise that Ru crowns her as the winner of this week’s lip sync. Along with her ten-thousand-dollar tip, Kylie also has to share who she chose to be eliminated this week. Kylie reveals that the queen she has chosen to get the chop this week is A’Keria C. Davenport. A’Keria says her goodbyes, but of course there’s still that whole “game within a game”, and just like the rest of the eliminated queens, A’Keria is presented with a cryptic video message from Ru that hints at a second chance in the competition while she’s packing her bags.

What we’ll see next week: The queens write and perform a new drag anthem, and some of the girls struggle with choreography (shocking).