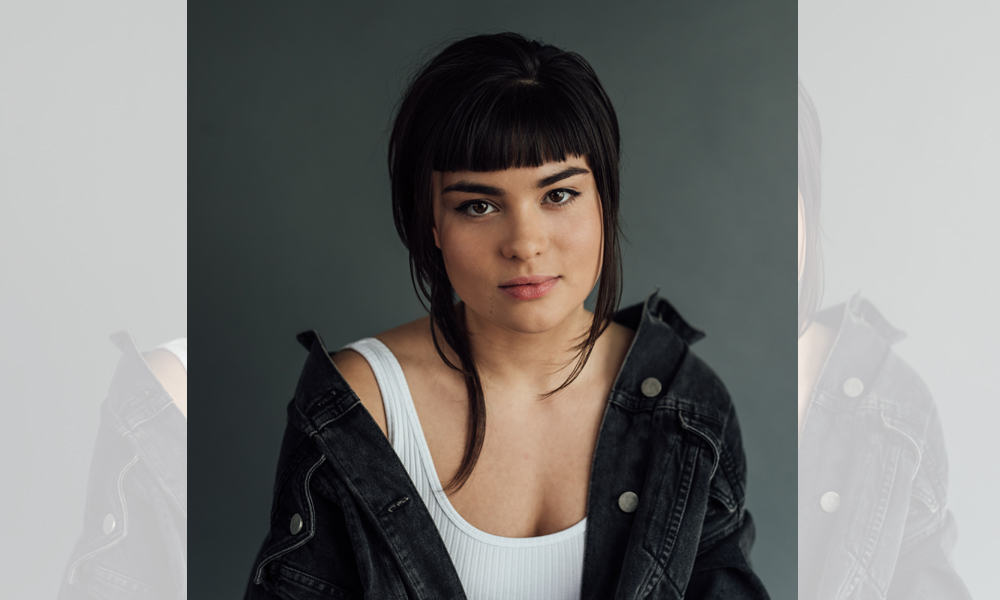 Devery Jacobs – actor, filmmaker and activist – is making a name for herself, and for her communities…

By Courtney Hardwick
Photos by Kristina Ruddick and MADE | NOUS

As an actor and creative in the entertainment industry, Kawennáhere Devery Jacobs knows what it’s like to be the only Indigenous person – and often the only minority – in the room. But she didn’t always feel that way. Born and raised in the Kanien’kehá:ka Mohawk Territory in Quebec, Jacobs was used to being surrounded by her culture and a family that celebrated that.

“Growing up in my community, I was surrounded by people like myself. I always saw myself reflected back at me, so I never felt like I needed to represent anything other than me just being me,” says Jacobs. “But when I stepped into the film industry, all of a sudden I felt this weight of having to represent an entire race of people while just being one person trying to make a living as an actor.” Some of that pressure comes from the lack of Indigenous representation in the industry and as Jacobs builds her career, she is committed to changing that.

Although she loved film and had a passion for acting at a young age, Jacobs didn’t feel like she could be successful in an industry that would only consider her for roles that were “ethnically ambiguous.” As an Anglophone living in Quebec, Jacobs found that acting opportunities were limited, so she followed a different passion and went to school to become a counsellor.

She was working at the Native Women’s Shelter of Montreal when she was cast in her first leading role in a feature film, Rhymes for Young Ghouls. The film was her first chance to work with an Indigenous writer and director to tell a story that reflected her own lived experiences, and it changed how she thought about her potential in the industry. She recalls: “That was the first role where I was able to see that I can do this: not only do I have the talent, but my experience is worthwhile to be a leading character in a feature film.”

The film was a critical success and Jacobs herself received a Canadian Screen Award nomination for Best Actress in a Leading Role. Despite that, she soon discovered that roles for Indigenous women were few and far between, and the ones that did exist were often whitewashed. Although recent years have seen a push for diversity on screen, Jacobs still experiences first-hand how projects that focus on Indigenous stories are treated. “Though there is this push for diversity and stories from people of different backgrounds, they’re typically projects that are funded at lower rates. And when filmmakers go to funding bodies for TV and are told, ‘Oh, this would be better suited for APTN [Aboriginal Peoples Television Network],’ that tells us that our stories aren’t worthy of being universal. So there’s still a long way to go.”

Jacobs gets an overall vibe that the push for diversity and inclusion is being treated as a fad and that a lot of the time BIPOC actors are hired to “check diversity boxes.” She believes one way to fix that is to give Indigenous creators more opportunities to tell stories from the ground up. “It’s important for Indigenous people to be included in the telling of our own stories, because it brings authenticity and lets us show the many different ways there are to be Indigenous,” says Jacobs. “So often we’ve only seen tragic Indigenous stories on screen – but what about funny stories, love stories, or dramatic stories not based in tragedy? Those should be brought to the screen and celebrated too.”

As an Indigenous actress, Jacobs has experienced being pigeonholed and stereotyped. She recalls one casting director referring to her as Pocahontas and the way it made her feel. “I think there’s such ignorance around the topic and that’s one of the reasons why what I’m doing today is so important,” she says. “People’s only depiction of Indigenous women is Pocahontas when that’s actually a false story. The real story of Pocahontas was that she was a pre-pubescent girl who was abused and married off way too young. It’s actually not a compliment at all [to be called Pocahontas]. It’s a harmful stereotype which sexualizes Indigenous women. If we’re given the opportunity to tell our own stories, we’ll be able to show the number of different ways it means to be an Indigenous woman other than Pocahontas.”

“Seek More,” a new campaign from MADE | NOUS (which celebrates the works of Canadian creators in film, TV, video games and digital entertainment), is designed to encourage Canadians to make a point of seeking out creators and content from a wide array of racial backgrounds and lived experiences, reflecting the vast and varied storytellers in our country. Jacobs is serving as an ambassador for the campaign, sharing her perspective of what representation means both in front of and behind the camera. The more demand there is for diverse content, the more opportunity there will be for Indigenous creatives to tell their stories and share everything they have to offer.

It’s important to Jacobs that she use her platform to push for Indigenous representation not only on screen but behind the camera as well. She’s a filmmaker herself: she has written and directed three award-winning short films and is currently in development on her first feature-length film, This Place. Her goal is to tell diverse, authentic stories, and the best way to do that is to go directly to the source. “If you look back through history, Indigenous people have either been not represented at all or mis-represented since the birth of film, and what Indigenous people are asking is to be included in the telling of our own stories.”

In addition to being Indigenous, Jacobs also identifies as queer, so she understands that there is a wide spectrum of experiences, and using the same stereotypes and tropes over and over isn’t going to cut it. Just as Indigenous characters can represent more than tragedy, queer characters should be more than a coming-out story or the token gay friend of the straight lead character. As both Indigenous and queer, Jacobs has a unique perspective, and she wants to make sure she sets the best example possible.

Despite being open about who she is, Jacobs has struggled with finding her place in the LGBTQ+ community. Writing for Fashion Magazine, she explained that as a child, she didn’t realize she was queer, and discovering what that means for her has been a process. “I was kind of operating in the world with blinders on and when I came into my queerness, there was a sense of an inferiority complex because I hadn’t had the lived experience that [others] have had so I felt like I wasn’t entitled to a place in the queer community. It was and still is a journey to stand in my place and understand that I am a part of the queer community.”

One of Jacobs’ most far-reaching roles to date has been her portrayal of Samantha Black Crow in the second season of American Gods, based on the novel by Neil Gaiman. The character is a young Cherokee artist who identifies as two-spirit. Mohawk culture doesn’t recognize two-spirit the way some other Indigenous cultures do, but as a queer woman of colour, Jacobs took the chance to play a fan-favourite LGBTQ+ character very seriously. In an interview with Collider, Jacobs said, “I think where I felt the most pressure was putting it on myself to not only portray Sam Black Crow from the novel well, and to do the character justice, but also to represent the Native American community, and the queer Native American community, properly.”

Jacobs is acutely aware of her unique position, but at the same time she tries not to be too hard on herself when it comes to being the ‘perfect’ representation of both the Indigenous and the queer communities. “There’s so little Indigenous queer representation, let alone two-spirit, let alone trans, so for me I feel that it’s important to be as gentle with myself as I am with other people,” she wrote for Fashion Magazine. Since there are so many stories to tell, she can’t tell them all, but she believes in doing her part to the best of her abilities.

When she looks to the future, she has high hopes for the potential of Canada’s film and TV industry and what our country has to offer. She cites the popularity of shows like Schitt’s Creek for its impact on the LGBTQ+ community and Kim’s Convenience for its portrayal of Korean Canadians as examples of how authentic, culturally diverse stories can connect us all. She hopes Indigenous stories can be told in a similar way some day – and that she’ll get to be a part of it.