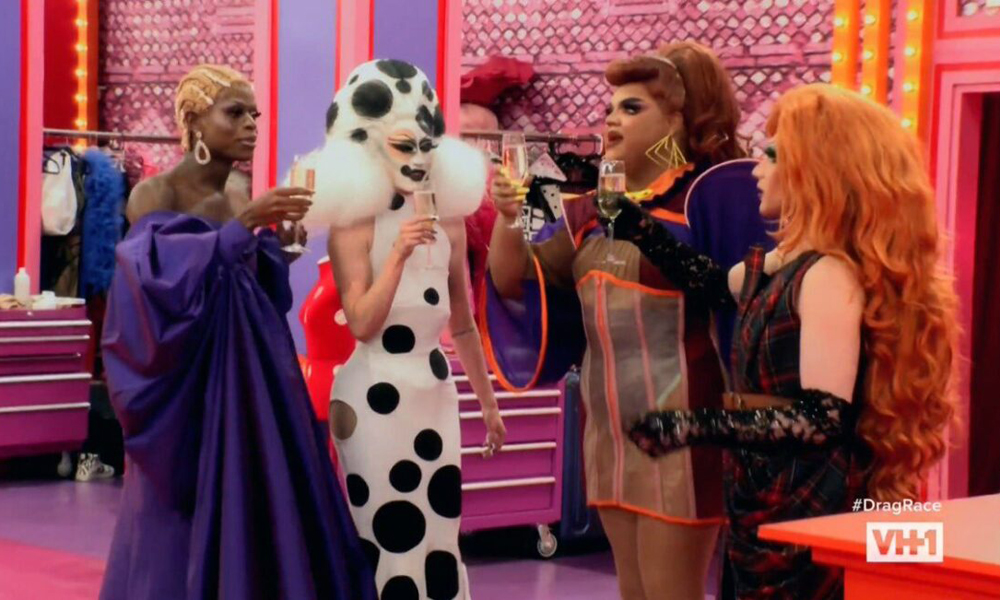 The final four queens put their own spin on a new Ru song, and fight for a spot in the finale…

Last week we said goodbye to this season’s “sweetheart” Olivia Lux after a lacklustre acting performance, and lip sync against Kandy Muse. With the competition finally starting to come to an end, four queens remain. This week we’ll see Season 13’s top four each put their own original spin on one of Ru’s songs, and each queen will have to fight for a spot in the grand finale, for their chance to win the title of America’s Next Drag Superstar. Let’s get into it.

This week’s episode starts with the queens in the work room immediately following Olivia’s elimination. Rosé says, it’s really sad to see another sister go home, but ultimately it was her time to go, and I think we can all agree. The queens read her lipstick message, and head over to the couch. They congratulate Rosé on her third main challenge win. They take a quick tally of the main challenge wins. All of these queens will fight to make it to the final episode, and they will do whatever they need to get to that finale. 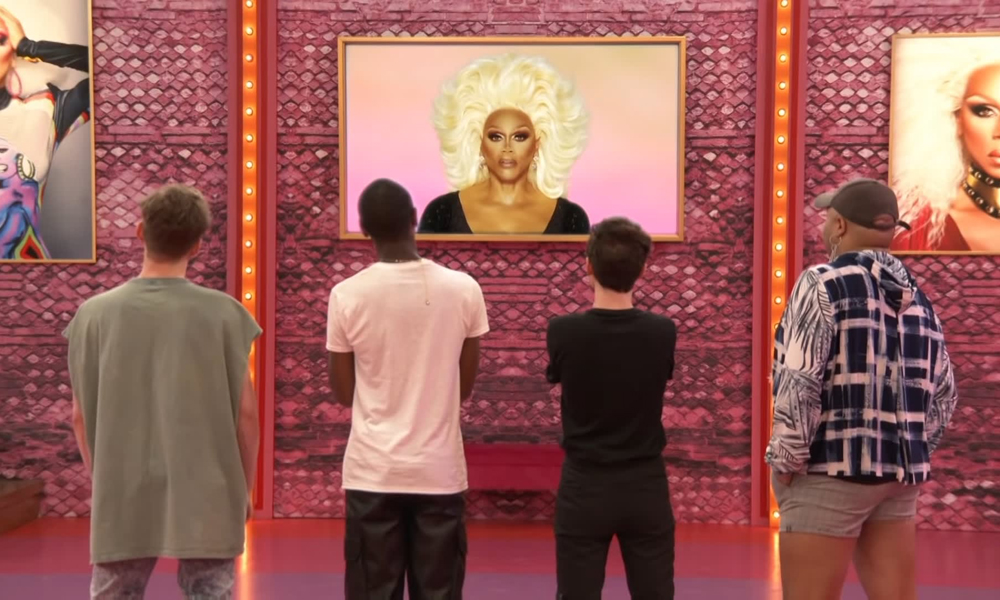 The next day in the work room the final four enters fresh and ready to take on the final challenge before the grand finale. Kandy reveals that if she wins, she will spend the money on a boat, because… she just wants a boat. Duh. Ru interrupts and tells the queens that this week is their last chance to prove they have what it takes to make it to the finale. Ru also reveals that for this week’s maxi challenge, the queens will be singing and dancing to their own original verse on his new song Lucky! The queens will also have a chat with Ru and Michelle, while the camera zooms in on an untouched bowl of Tic Tacs. Rosé is a song and dance girl, so she’s not too worried about this challenge. The queens take turns sharing their inspiration, and Kandy tells the girls she’s worried because every time there’s a group challenge, she ends up in the bottom.

Gottmik is first to chat to Ru and Michelle, and talks about their transition, drag name origins, and making Ru wheeze with laughter. Gottmik also talks about the journey on the show, and how much fun the competition has been. Rosé is out next, and talks about theatre kid roots, her childhood in Scotland, and how he’s semi-new to drag, but performing comes as second nature. Kandy is next to talk to Michelle and Ru, and talks about where she got her drag name, and her lip sync last week, and what the inspiration behind her pocket look (she has no idea). Kandy revels in the fact that everything she is made fun of on the outside world, is celebrated in the Drag Race world. Last to talk to Michelle and Ru is Symone. Symone talks about her drag journey starting in Arkansas, the move to L.A, and how deep her inner saboteur runs. Ru gives another famous pep talk, and the interview portion is over.

Following the interviews, the queens head out to the main stage to work with Jamal Simms on the choreography for Lucky. The queens haven’t worked with Jamal since the social media rusical. He starts with Symone, who is working with some classic chair-choreo. Gottmik is up next, and Jamal tells her to connect with the lyrics of the song to sell her verse. Kandy is third and gets her steps down flawlessly. Rosé is last, and obviously picks up all of Jamal’s choreography quickly, but struggles a bit with being rougher to the steps. After watching the rehearsal I’m not too worried about any of these queens come performance time. They’ll pull it off.

It’s elimination day, and as the queens get into drag for the last runway, they talk about how excited they are for the performance. They also talk about their first impressions of each other, which is pretty similar to all of our first impressions of them all.  Out on the main stage Ru introduces the judges, and this week it’s just family. The queens perform the world premiere of Lucky. This monochromatic pin-up performance was one of the best final four songs we’ve gotten in a long time. Each queen held their own, proving this is going to be one of the toughest weeks to judge, and send a queen home. Following the performance, the queens hit the runway, and the category is “Drag Excellence”. Gottmik stuns in a dalmatian gown, Kandy serves in a mod mesh mini-dress, Rosé pays homage to her Scottish heritage in a tartan frock, and Symone makes a statement with floor length balloon sleeves, and a beautiful cornrow wig. Ru thanks all of the queens and applauds them for a job well done. 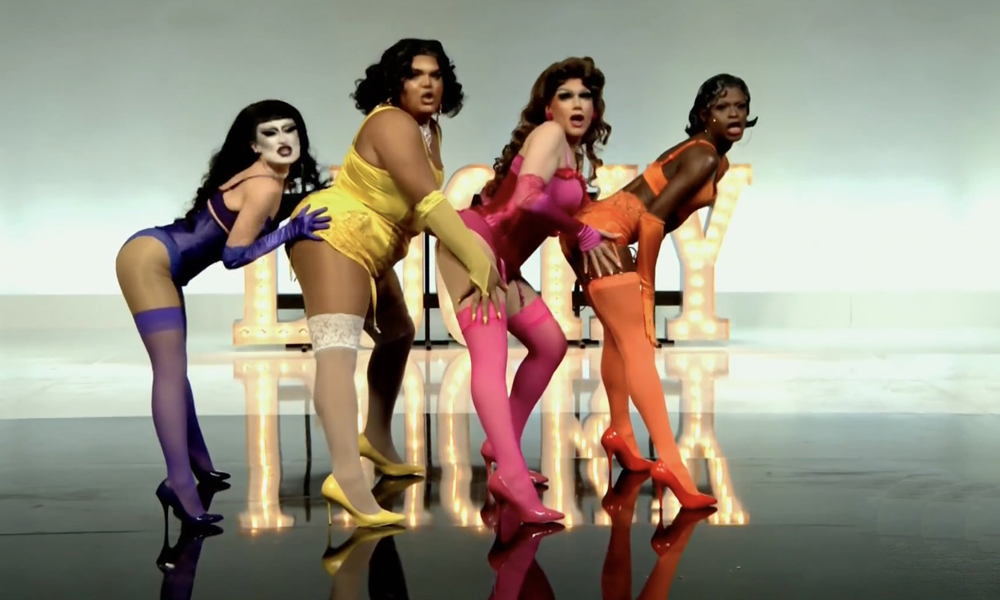 The critiques start with Gottmik. The judges love her fashion forward, and fun runway look, and applaud her commitment to her performance. The judges love how original, and genuinely excited she is to be in the competition. Ru gives a tearful speech about parents, and Gottmik gives thanks to the judges for all that they’ve done. The judges love Kandy’s runway look and loved how authentic her energy was in the performance. Rosé is one talented queen, and the judges praise her professionalism throughout the competition. They love her runway, and her performance in the music video was flawless. Finally, the judges tell Symone that she absolutely sells every look she’s brought to the runway. Her musical comeback in the performance also did not go unnoticed. She’s always seemed to pull it out of the bag this season, and that should be applauded. The queens take part in the Drag Race tradition of giving advice to a childhood photo. After they take turns giving tearful, and emotional speeches to themselves, the judges deliberate who will make it to the finale.

Following the judge’s deliberations, Ru announces that ahead of announcing who will make it to the finale, they all have to lip sync for their lives…BUT they have to do it one at a time. The queens take turns lip syncing for a spot in the finale toI Learned from the Best, by Whitney Houston. Each of the lip sync performances are full of passion. This is also the first time we’re seeing Gottmik, and Rosé lip sync this season! After each of the queens give their all to get to the finale, Ru announces that nobody is being eliminated tonight, and all four queens will compete in the finale. It is still very much anybody’s game. Any one of these queens could win, and in two weeks one of them will.

Front runners of the week: Any of them could win, but if it came to making a lasting impression on Ru, I think we can all agree Gottmik has it in the bag.
Who will have the most sickening finale look: It will be between Symone and Gottmik. They have given us jaw-dropping looks week after week, and I can’t wait to see what they have in store for the finale.
What we’ll see next week: It’s the season 13 reunion! We catch up with our top four, as well as the eliminated queens. Will Kandy and Joey Jay make it official?