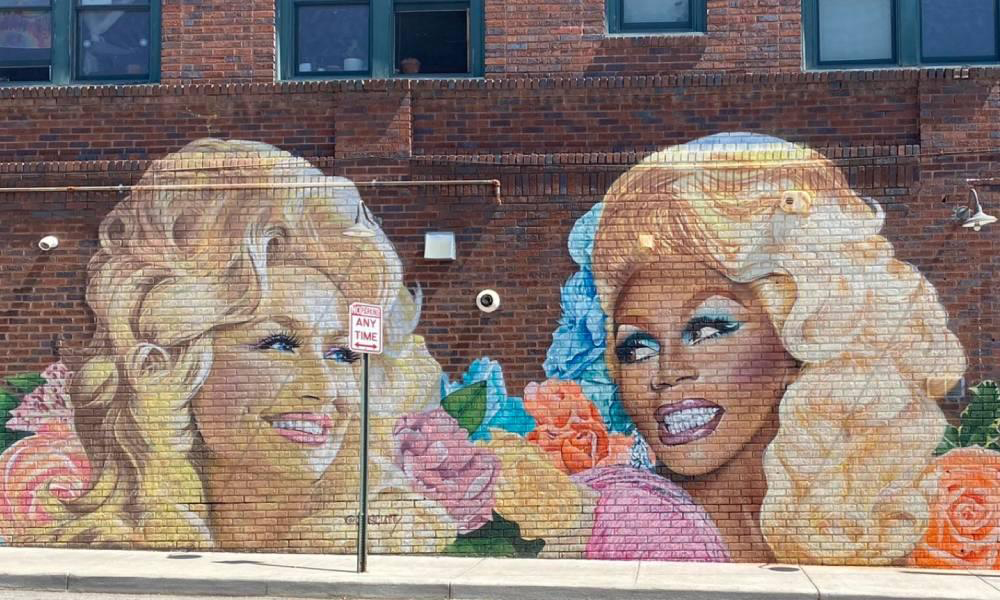 The update we needed…

The giant-sized Dolly Parton mural on the side of Beauty Parade in North Carolina has been a fixture for the past few years. Now, the country music singer and songwriter has a new duet partner…world-renowned drag icon RuPaul.

According to WSOL, a likeness of the queer ally and country music icon has graced the wall outside the Beauty Parade salon in West Asheville since 2018. Recently, though, owner Terra Marshall called upon muralist Gus Cutty to update the mural by adding the iconic drag queen to his earlier artistic creation.

Marshall explained she’s always been a big fan of Parton, having “loved her for years.” When she decided she wanted to pair her love of Parton with her salon, she commissioned Cutty to paint the mural first of Parton alone. It turned out Cutty was just as much a fan of Parton as Marshall. It took the creative a mere four days “working 9 to 5” to complete the original job, using only a picture on his phone as a guide.

“We get at least 10 visitors a day, probably upwards of 50 or 60 during the weekends,” Marshall told WLOS. “So, the new addition is definitely going to bring probably even more.”

Indeed. The latest pairing had been generating a good deal of attention in the town, as Cutty and Marshall kept secret the new Parton partner until the very end. Marshall had even been soliciting guesses the salon’s Facebook page.

Don’t worry… It is RuPaul.

Drag Race fans have been begging for a pairing of Parton and RuPaul for years with many wondering why Parton has yet to appear as a celebrity judge on RuPaul’s Drag Race. While both are dear friends and have appeared together publicly in the past, scheduling issues have prevented Parton’s participation to date.

“To just calm everybody down we do ask Cher, we do ask Madonna, we do ask Liza, we do ask Dolly, we ask everybody, and scheduling is always the conflict,” judge Michelle Visage explained earlier this year, later noting how “it took years to get Gaga, but we got her.”

Here’s hoping this iconic mural will help move things along.